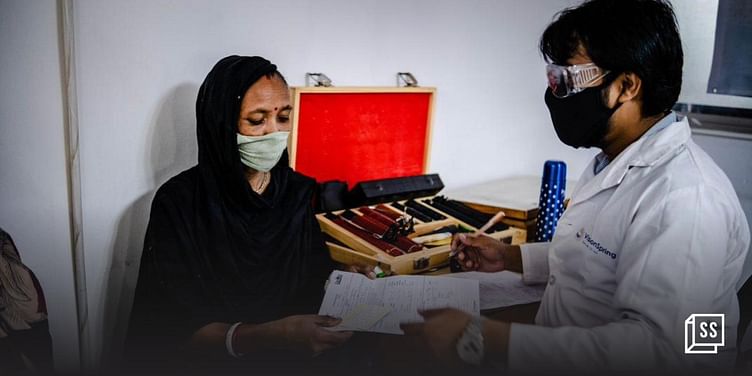 At the age of 23, Jordan Kassalow, who was a volunteer at a medical mission in the Yucatán Peninsula in Central America, realised that the only thing standing between 2.5 billion people and their ability to get an education and earn a living was a simple pair of glasses.

This was the genesis for the NewYork-based Scojo Foundation—started in 2001 with the goal of reaching and providing affordable, quality glasses to people worldwide who need them.

The foundation partnered with Helen Keller International to launch a six-month pilot programme in Andhra Pradesh in 2005.

For the first few years, it sold only reading glasses through vision entrepreneurs—who are local people hired and trained by the non-profit to carry out marketing and eye testing, and are responsible for reaching out to people in the remotest locations.

In 2008, Scojo Foundation was renamed to VisionSpring.

“More than 100 crore people globally don’t have the glasses they need to see clearly, and most of them hail from low-income communities. For many, a vision screening requires several hours of travel to the nearest hospital and waiting in endless queues. But in other countries, reading glasses are readily available as a non-prescription consumer good at pharmacies, train stations, and stationery shops. In India, too, reading glasses need to be taken out of the medical environment and into communities,” Ella Gudwin, CEO of VisionSpring, tells SocialStory.

“Our goal is to solve the issue of uncorrected blurry vision in a generation to create not only a ‘clear vision India’ but a ‘clear vision world’. We can’t do it alone; we can achieve a clear vision for all only through collective action across sectors,” she adds.

Today, the organisation has a presence in about 23 states in India, with concentrated efforts in states with lower human development indicators, including Assam, Rajasthan, Odisha, Bihar, Madhya Pradesh, and Uttar Pradesh. Additionally, it also offers its service in Bangladesh, Vietnam, Ghana, Kenya, Nigeria, Uganda, and Zambia, and has partners dispensing its eyeglasses to lower-income wearers in more than 15 other countries globally.

The story of a doctor who lost his eyesight; fought back and helped 10,000 people with disability find jobs

VisionSpring increases access to eyeglasses primarily through three key programmes: See to Earn, See to Learn, and See to be Safe.

Its ‘See to Earn’ programme brings vision screenings and eyeglasses to working-age adults while they are at work.

In 2018, VisionSpring conducted a randomised control study with Queens University Belfast and Clearly in Assam which showed that after visually-impaired tea pickers received eyeglasses, their productivity increased 22 percent on average. For women over the age of 50, their productivity increased by 32 percent—measured in kilograms picked per day. We have found similar results among workers in garment factories.

“Clear sight can translate to a significant increase in income, and it can also extend an individual’s working years,” adds Ella.

The second programme—the ‘See to Learn’ initiative—focuses on children in need of eyeglasses by bringing vision camps to schools.

Its See to be Safe programme focuses on drivers to make India’s roads safer.

“Although India has only 1 percent of the world’s vehicles, according to the Ministry of Road Transport and Highways, it accounts for 13 percent of global fatalities from road accidents—approximately 400 every day. By hosting screenings at transport hubs, we hope to make it easy for drivers and allied transport workers to get the glasses they need to stay safe on the roads,” says Ella.

Additionally, VisionSpring also provides bulk quantities of eyeglasses, along with training, marketing, and other support to a network of mission-aligned hospitals, eye care centres, NGOs, and government partners.

“Eyeglasses yield an incredible return on social investment, unlocking more than $43 in income earning potential at the household level for every $1 of philanthropy. Indeed, the evidence shows that eyeglasses deliver the highest increase in productivity of any health commodity studied in a trial,” Ella adds.

Over the last nine years, VisionSpring’s Managing Director Anshu Taneja has been leading the operations in India. Under his guidance, the organisation grew its capacity and operations from correcting the vision of 1,55,000 people a year to more than one million in India annually—in addition to screening more than 27.5 lakh people directly and through its partners.

Since 2005, VisionSpring claims to have distributed more than 50 lakh eyeglasses throughout India.

Last month, the foundation launched its newest collection of eyeglasses—its first-ever Made-in-India range. This initiative is aligned with the Government of India’s ‘Make in India’ and ‘Atmanirbhar Bharat’ initiatives and is aimed to make India become a global hub for eyeglasses.

According to reports, approximately 60 crore people in India suffer from blurry vision because of a lack of eyeglasses. “This is one of the biggest obstacles to economic growth, education, and road safety in India, and we need to solve this problem in a mission mode. We plan to work closely with the government and our partners to ensure a clear vision for all in India through the Bharat Ujjwal Drishti Abhiyan (India Clear Vision Mission),” she concludes.