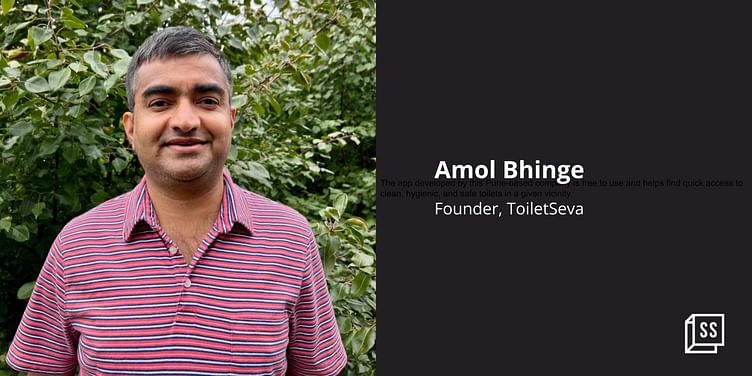 The app developed by the Pune-based company is free to use and helps find quick access to clean, hygienic, and safe toilets nearby.

Having access to a clean toilet, inside or outside your house, is considered a basic human right. Since the launch of Swachh Bharat Abhiyan, sanitation practices in India have improved, but people still hesitate to use a public restroom even in case of emergencies.

This could be due to a number of reasons—washrooms being too dirty or unsafe, lack of locks or latches, unavailability of water or restrooms not being well-lit. ﻿ToiletSeva﻿ is keen to set this right.

“People in India have the notion that the condition of the toilets will never improve and that the status quo will remain,” says Amol Bhige, Founder of Pune-based ToiletSeva.

Through its app, ToiletSeva makes it easy for people to search, choose, and use a restroom without any problems. It currently has over 1,28,500 toilets across India listed on its app, which has been dowloaded by 3,235 users in both Apple’s App Store and Google Play Store.

“We are breaking the ice and making people aware that they have a fundamental right to access clean washrooms,” says Amol.

It was a trip to the jeweller’s that triggered the idea for ToiletSeva. When he used the store’s restroom and found it in terrible shape, he told the same to the shopkeeper. He learned that several establishments offer these services but rarely knew how to maintain them.

ToiletSeva can be used by anyone—from commuters to the elderly—to find the nearest restroom. The app is free to use and lists restrooms at hotels, cafes, gas stations, and schools as well as paid private and public toilets.

“We are not in the certification business of toilets. We are relying on the citizens on this as this initiative is for them. We also have features like recent reviews and a level-one connection where citizens can check the reviews,” says Amol.

Besides cleanliness, the app also lists other details like condition of locks, and whether soap or sanitary napkins are available.

“Citizens can play a huge role in making the app successful… they can be a part of this change by adding unlisted toilets and by reviewing them... The more the number of toilets listed, the wider will be the choice for facilities available which will make the app better to use,” he says.

You could also volunteer to be a ToiletSeva Host and list your restroom for others to use. The app can be used in either Hindi or English. Since the app is free, hosts who list their restrooms do not get any payment.

In a first, Hyderabad has a petrol pump run by former women prisoners