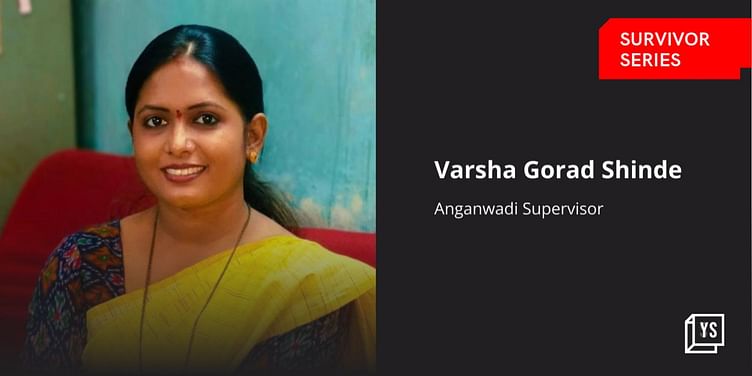 In this week’s Survivor Series, we bring to you the story of Varsha Gorad Shinde, who has set an example for others by showing how consistent efforts can bring a change in the lives of people.

I am Varsha Gorad Shinde, and I work as an Anganwadi supervisor in the Yerawada Nagar Road area in Pune, one of the oldest anganwadis in the country, which was started in 1978. The area has a major migrant population who come from neighbouring states, and they have language issues.

I focus on migrants in the area and children with special needs. I always try to bring innovation while working in the field of Early Childhood Development (ECD). My aim is to work for migrant communities and physically weak children.

Recently, I helped three-and-a-half-year-old Shreyansh (name changed), who did not have much control over his body movements. He would talk constantly, and his behaviour was not normal for his age. But I paid special attention to him. I made him mix with other children and communicated with him, which made him behave like other normal children.

We all were amazed to see him become normal and stable. However, during the Covid 19 pandemic, the Anganwadi was closed, and we could not reach Shreyansh. His past issues resurfaced and his parents reached out to us. So, we decided to make video calls every day and communicate with him. His behaviour improved a lot. His mother sent a beautiful message thanking us and recognising our efforts. Shreyansh is absolutely fine now.

Coming from a farming family, I want to work to improve the lives of farmers

In August this year, in a first-of-its-kind effort, I conducted a workshop for Yerawada jail officials on early childhood development, and the response was tremendous. My session for the jail officials and their wives went very well. They found the programme was much-needed for their children’s growth. Due to security reasons, conducting workshops on jail premises was very difficult. But I managed to do it.

My next wish is to help jail inmates with the ECD programme. I have requested the jail officials to allow me to conduct a similar workshop for women prisoners who are mothers, as they need more help to raise their children.

There is often a perception about jail inmates and their children. I would like to wipe the taboo around these women and children. These children need more care. We have to deal with them in a more gentle way. This would be a challenge for me, but I am ready to take it. I feel it is a kind of social responsibility to work with these children and their parents.

In the past, I have also trained senior Anganwadi Tai’s in handling technology. A few of them did not know how to operate a mobile to keep track of our programmes. I taught them and it made their life easy. They have become experts now.

I believe in providing care for every child and educating parents about the early childhood development techniques. Every parent loves their child. But they lack awareness due to social and economic reasons. My aim is to bring that awareness to them and help them raise their children. There are various aspects of early childhood development which I want to inculcate in them in simple language and techniques. Ultimately, these children are the future.

Can one company create employment opportunities in each of India’s 500 districts? Yes, RuralShores is on its way