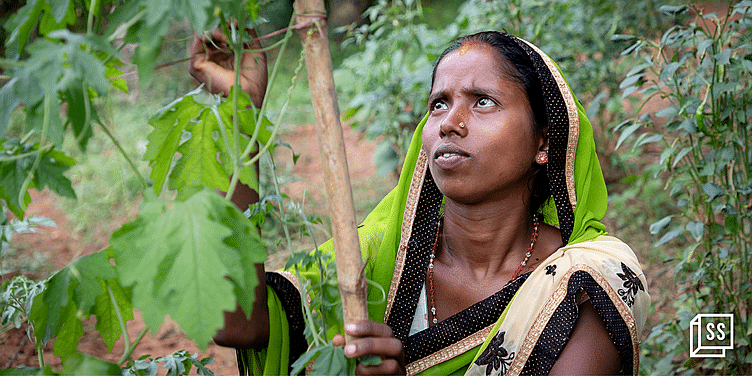 After a successful pilot, The/Nudge Institute’s ‘End Ultra-Poverty’ programme saw over 400 rural women from the ultra-poor subsect take to livestock rearing and grow high-value crops to earn a livelihood.

On December 7, nearly 400 rural women from the remotest corners of Jharkhand travelled to Ranchi to receive their ‘graduation’ certificates in the presence of Chief Minister Hemant Soren.

These women belonged to the ultra-poor subset until three years ago, living outside the social and financial perimeters of society, with a few of them never even having heard of welfare or community programmes.

Today, they are confident farmers, own livestock, and care for them, and know a thing or two about money and managing it.

What brought about the difference? The/Nudge Institute’s ‘End Ultra-Poverty’ programme, which adopted the universally well-known, tried and tested ‘graduation approach’ to work predominantly with women, or as they call ‘didis’, from ultra-poverty segments to build sustainable livelihoods for them.

After a successful pilot, the programme is now scaling in partnership with several other state governments, including Karnataka and Rajasthan.

According to The World Bank’s latest Poverty and Shared Prosperity report, the COVID-19 pandemic dealt the biggest setback to global poverty in decades. The report states that the pandemic increased the global extreme poverty rate to an estimated 9.3 percent in 2020—up from 8.4 percent in 2019.

Within that, the ultra-poor demographic suffered significantly. Ultra-poverty is an inability to meet even the barest of basic needs--food, shelter, basic healthcare, and basic education. They are a vulnerable subset of our population, and are often found in the remotest parts of rural India.

In 2018, three years into The/Nudge Institute’s inception, John Paul, the Director of the organisation's Rural Development programme, was on a field trip to some of the poorest regions of India and its neighbouring countries to study development programmes. The journey took him and his colleague to Bangladesh, where they came across the graduation approach, targeting the poorest of the poor.

“Estimates are that in any village, about 5% to 10% of the population are ultra-poor. That means, in India, with its population, that’s about 100 to 150 households that are striving to meet even the basic needs. For us, it became imperative that we work with this particular population segment,” John says, adding that neither governments nor markets are able to reach and serve the ultra-poor effectively because of many reasons. One of them being the ultra-poor themselves not wanting to participate.

Jharkhand, India’s second most impoverished state, is home to more than 500,000 households living in ultra-poverty. The ultra-poor households here are not only food insecure, but also do not have access to assets like land or livestock to earn a living. Their isolated state also means they are reluctant to accept help–often under the impression that there is a hidden catch.

Thus, to work with the migrant population, the first step for the Nudge team was to build trust. According to John, the questions that came their way on the ground were plenty.

“We were helping them change their way of life and teaching them agriculture, or rear goats or cattle in whatever little piece of land they had. They came back with, ‘Why would I take that risk?’, ‘What if it doesn't work out?’, ‘What if I cannot actually do agriculture?’, ‘What if my goods die?’ ‘What if my business fails? It took about three to six months to build that trust,” John says.

And, that is the good thing about the graduation approach, as the programme is designed to factor in time--working on a careful process of targeting, selections, small group formation, life-skills coaching, and then accordingly choosing the livelihoods for a particular household.

“For households that do not even have access to water, how is it fair that we ask them to take up rice cultivation? We have to pick the right livelihood for that particular household, and then give them a grant,” says John.

The NGO typically provides 50% to 60% of a household’s annual income as a grant in the first two years to kickstart their livelihoods.

Anjani Birhod belongs to a migrant household in a small village in the Lohardaga district, Jharkhand. A young mother to two little children, Anjani and her husband moved from village to village, working as labourers or gathering firewood to sell.

Recounting some of the ways the programme has impacted her family’s lifestyle, Anjani says, “We now have three meals a day, and even have green vegetables as part of our meals.”Anjani and her husband are now into farming, and even send their daughter to a local government school.

“We used to grow maize in the little bit of land that we have, but it wouldn’t always work. After joining the programme, I was taught to grow vegetables and also have my own livestock. We now grow enough vegetables for our own consumption and for selling,” she says.

For the first 12-18 months, there is a lot of hand-holding, but after that, the difference seen is phenomenal, as the didis are owning their livelihoods, says John.

“At the three-year period, the women have access to government schemes, own kitchen gardens, go to the market and sell the products themselves.” Over and above this, he adds, there is also a marked behavioural change in their confidence.

John explains, “When we first approach them with the programme ideas, the didis are hesitant and look to their husbands for decisions. By the end of the programme, the women, having earned their livelihoods themselves, are far more independent. Since she herself is doing the work and earning, she can claim that money and save it, or put it into her children's education.”

In the three years of the programme, livelihood generation aside, the ultra-poor households are also assisted in creating bank accounts, and given access to entitlements like the PVTG (Particularly Vulnerable Tribal Group) pension, PDS (Public Distribution System) card, and the Aadhaar card.

“The setting up of this cushion is important so that if they fall, they don't fall on the ground, and they actually have something to fall back on and then grow from there,” explains John. According to data from the institute, 91% of eligible didis now access PVTG pension and 97% didis have an MGNREGA job card.

For now, all didis perform at least one livelihood activity that is project supported. While 99% of households own small livestock (goats and pigs) compared to 2% before the intervention, 91% of didis have an additional annual income of Rs 12,000 or more.

With the programme’s core tenets being livelihood promotion, social empowerment, and social and financial inclusion, The/Nudge has also ensured the didis are now part of self-help groups in their villages, and from then on, the hand-holding is passed on to these institutions. The institutional structure envisaged under the National Rural Livelihoods Mission (NRLM) is the setting up of self-help groups (SHGs) at neighbourhood levels.

That some of these didis always had access to the SHGs but simply did not feel like they could also belong or be part of it, is another story. That’s where agile institutes like The/Nudge play a part in being enablers. The foundation was supported in this pilot project by funding partners KPMG and LTIMindtree.