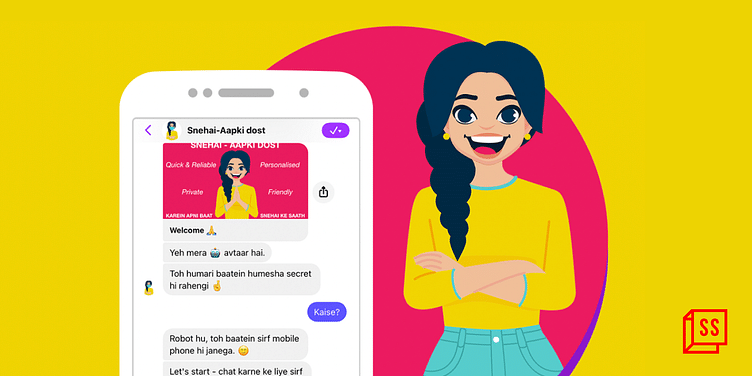 SnehAI is a AI-based chatbot created with the help of research and learnings of Population Foundation of India’s transmedia social and behaviour change communication programme. Available on Facebook Messenger and WhatsApp, it addresses queries on sexual reproductive health and online safety.

Where do young people go when they need information on sexual and reproductive health?

I asked 15-year-old Minal* from New Delhi this question. I could sense she was hesitant to talk to an adult about it. Her answers were evasive and filled with hmmms… and a few ‘maybes’ and then reluctantly moved on to books, friends, and the internet. Not the sex education classes in school though – those were “clinical”!

When it comes to matters of sexual and reproductive health, adolescents like Minal face a number of challenges – lack of verified information, timely guidance, and healthcare.

But what if there is something they can easily communicate with – privacy guaranteed, with information verified and vetted by experts in a medium they understood best?

Enter ﻿SnehAI﻿, a friendly chatbot powered by artificial intelligence that attempts to answer all your queries in a friendly and non-judgemental space.

I log into Facebook Messenger through SnehAI’s website (you can do so on WhatsApp as well) to understand the chatbot and its working. I am not a teenager, but having raised one not too long ago, I can try.

A friendly figure pops up and reassures me, “Mujhe insaano ke saath confuse mat kar dena (don’t confuse me with humans)” and goes on to reassure me in Hinglish that I could talk to the bot tension-free about health and online safety, those matters I am usually reluctant to share with friends and family.

There are options to choose between health and wellbeing and online safety. Under online safety, I can click on different topics like ‘cyberspace ke sitare’, ‘break ke baad’, ‘gaming shaming’, ‘internet champions’, and others. These short videos caution against talking to strangers on social media, trolling, and ways to maintain privacy. The language is simple and easy to understand.

While I navigate health and wellbeing, SnehAI assures me that whatever transpires between us is private. Here too, there are informative videos, helplines, stories, quizzes, and games to understand concepts like menstruation, attraction and love, friendship, and more.

This chatbot powered by artificial intelligence was created with the help of the research and learnings of the Population Foundation of India’s transmedia social and behaviour change communication program, Main Kuch Bhi Kar Sakti Hoon (MKBKSH; I, A Woman, Can Achieve, Anything).

To understand more on why and how the chatbot was developed, SocialStory spoke with Tejwinder S Anand, Joint Director, Communications and Operations, Population Foundation.

“In 2014, we had launched a transmedia social and behaviour change communication programme on Doordarshan, Main Kuch Bhi Kar Sakti Hoon (MKBKSH; I, A Woman, Can Achieve, Anything) that ran for three seasons. SnehAI’s avatar is based on the lead protagonist of the show, Dr Sneha. The avatar is approachable and looks like someone who young people can see as a friend and can openly talk to,” he says.

The 360-degree approach on women’s health also included celebs who spread the word about the show. As an extension of the show, and to be able to reach out to young people who are on social media, the idea of the SnehAI chatbot developed.

Facebook was the widely used platform in 2019, and was available on Messenger.

“The idea was to provide a secure and non-judgmental space to young people, so they could learn about issues related to their health and wellbeing. The show addressed socio-cultural norms around family, planning, gender equality, and encouraged healthier behaviour. It also covered sanitation in the third season,” Tejwinder says.

He says the idea was to get people to engage around family planning and sexual reproductive health, adding that the chatbot was initially developed for Facebook Messenger only.

SnehaAI was developed with content around various themes that were menu and keyword-based. It was launched as a menu-based click action bot that users could navigate through SnehAI’s Facebook page and chat easily with. The team also engaged in a number of online and offline promotions to popularise the chatbot.

Initially, the chatbot was launched with content on Sexual and Reproductive (SRH) issues.

“We trained the bot to able to identify certain keywords and all of these are in Hinglish, neither Hindi or English, which is the preferred chat language for several young people. The multimedia format makes it both educative and engaging,” Tejwinder says.

No information is sought about the user’s name, location, or phone number, and they can delete the chat history on Messenger. SnehAI is now also available through its website and on WhatsApp.

"As one of the incubatees of the WhatsApp Incubator Program (WIP) of Meta, Population Foundation of India used the WhatsApp Business Platform to facilitate positive and measurable health outcomes via this chatbot. As part of the initial pilot, approximately, 35,895 users chatted with SnehAI on WhatsApp.”

Users engage with SnehAI for stories, to access helplines and videos, and to seek information that they would not get anywhere else.

In April last year, SnehAI was relaunched with content on online safety developed with support from the Global Partnership to End Violence Against Children (EVAC) Fund. The enhanced version comprises core themes such as online abuse, grooming, privacy, exploitation, digital safety, and the significance of consent to equip adolescents with information and resources to identify and report online child sexual exploitation and abuse.

“It will offer support to young people in becoming better equipped in their use and consumption of online content, and will leverage its already large user base to support them with tools and resources for better, safer online behaviour,” Tejwinder says.

A comprehensive campaign to expand the knowledge base among adolescents in the age group of 13-19 years on other aspects of digital safety will also be conducted.

With Instagram more popular than Facebook among the youth, how does he envisage a wider reach for SnehAI?

When PFI launched the online safety initiative last year, they realised a lot of young people weren’t on Facebook, which led them to using WhatsApp as a new medium. In addition, they also run Facebook and online digital campaigns to drive awareness around the chatbot and get people to chat with it, directly on WhatsApp.

As a not-for-profit that that believes in using technology for good, Tejwinder says they want to keep developing the chatbot, make it work more intelligibly, and add more options for users. “We also want to expand into other regional languages and reach out to more young users.”

Making the best out of waste: These 8 startups are helping Indian cities manage trash