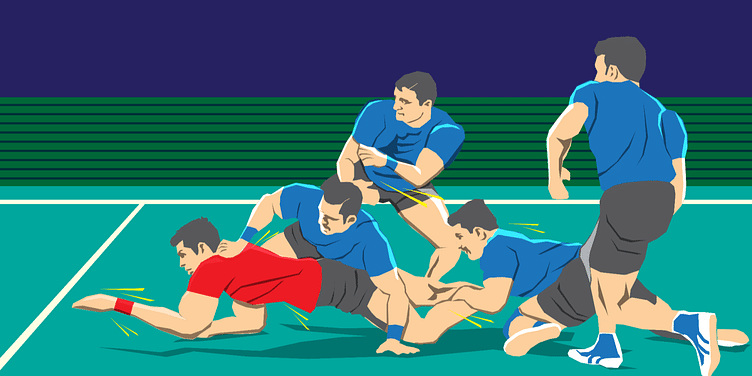 Sportzchain, a fan engagement platform, wants fans of kabaddi to engage actively with their favourite teams and participate in team decisions and not just remain passive supporters.

What if you have a say in the jersey of your favourite sports team? What if your opinion is sought on playing schedules and training sessions? What if your voice is heard and it influences the team’s decision? All this is possible if you follow the game of kabaddi, and this is what Sportzchain, a fan engagement platform, is attempting to do.

Singapore-based ﻿SportZchain﻿ aims to “empower” fans of kabaddi so that they engage actively with the team of their choice and participate in team decisions and not just remain passive supporters.

The startup recently ran a poll asking fans of the Dabang Delhi kabaddi team to cast their vote picking a design for the team’s training kit jersey.

How is this different from a Twitter poll? According to the company, Twitter polls don’t influence the team’s decision. But, on Sportzchain’s web app, kabaddi fans with tokens (crypto assets) can participate in polls that would affect certain decisions of the teams, Siddharth Jaiswal, Co-founder, Sportzchain, tells The Decrypting Story.

“The sporting team must abide by the results of the poll and put fan suggestions into action. This will create a more loyal fan base. We want to create a decentralised fan engagement platform where fans can influence a team’s decision,” he says.

For instance, the training kit jersey chosen by most fans in the poll will be used by Dabang Delhi during the upcoming season of Pro Kabaddi League, the professional kabaddi league of India.

Going forward, fans could impact even decisions like playing schedules and training sessions.

Die-hard sports fans, Siddharth Jaiswal, Vinayak Yannam, and Sankar S.K., co-founders of the startup, noticed that, in conventional fan engagements, fans do not engage actively with the team and act as passive supporters. They wanted to support homegrown sports like kabaddi and encourage fans in a manner in which they felt connected with the teams. So, they joined forces to start Sportzchain, a Web3 engage-to-earn platform, in 2022.

Cricket may be a dominant sport in India, but other sports are catching up too. India’s performance in the just-concluded Commonwealth Games and Chess Olympiad and Olympics earlier has stirred the interest of viewers in other sports. Apart from badminton, chess, and hockey, the indigenous sport of kabaddi, which is said to have originated in Tamil Nadu, too has been garnering quite a fan following. In fact, the first edition of Pro Kabaddi League in 2014 saw the second-highest viewership in the country, just behind the Indian Premier League (IPL).

As shrill cries of kabaddi, kabaddi, kabaddi rent the air, the audience watching the game is filled with anticipation. It is this growing interest and excitement around the game that Sportzchain wants to capitalise on. Towards this end, the startup has partnered with four teams of Pro Kabaddi League—Tamil Thalaivas, Dabang Delhi, Bengal Warriors, and Gujarat Giants.

“When we talked about tokenisation of membership for a loyal fan base, we thought of kabaddi because a majority of the viewership of Pro Kabaddi League is from tier-2 and tier-3 cities, which is huge from a crypto audience standpoint. In a recent survey, we noted that 60% of WazirX and Coinbase users were from tier-2 and tier-3 cities and we considered this (kabaddi) to be the ideal match,” explains Siddharth.

However, the co-founder says Sportzchain is open to collaborations with any sport. The startup has collaborated with the Iceland cricket team and is in talks with some IPL teams too.

The fan engagement platform is built on ﻿Polygon﻿, an infrastructure provider. In July, the startup launched its alpha application and is pilot testing it with select users.

There are two kinds of polls on the Sportzchain platform—decision polls and opinion polls. While the verdict of fans in decision polls will be implemented by the sports team, the opinion poll will be used to understand fans’ opinions, though they are not binding on the team. The polls take place on the Ethereum and Polygon blockchain platforms. The votes are stored on a blockchain, thus eliminating voting bias and the possibility of rigging, says Siddharth.

Apart from the poll on training jersey, the startup also ran a poll on what the fans of the Tamil Thailavas team preferred to see—a post-auction explainer video or retained players attempting dialogues from Tamil movies. The poll result was in favour of an explainer video, and a video explaining strategies and team strength was released.

Recently, Sportzchain conducted an opinion poll asking fans to choose a team—from Sweden, Netherlands, Lithuania, and Poland—that could play a cricket match against Iceland in 2023.

Previously, the startup had launched phygital collections (physical items paired with digital NFTs). The startup had turned Tamil Thalaiva’s captain’s jersey into digital NFTs. Users who brought the NFTs were also given a physical framed copy.

Crypto for calories: Web3 startup rewards users with digital tokens for working out

Sportzchain received grants worth $10K from Ethereum scaling solution Polygon in March 2022. In May, the startup closed $600,000 in a seed round led by ﻿SUNiCON Ventures﻿ and MAKS Group.

The company is at a pre-revenue stage and will run on a B2B model. When the platform goes live, it intends to launch fan tokens. Sports teams will own the tokens; 80% of the revenue generated from these will go to the teams, while Sportzchain will get the remaining 20%. The company also plans to earn revenue through contests.

The sports marketing business has recognised the potential of cryptocurrencies and blockchain technology to increase fan participation and draw sponsors. The global market cap of fan tokens is around $350 million. According to CoinMarketCap, the top-rated tokens in the industry, as of August 11, 2022, are Alpine F1, Paris Saint-Germain, SS Lazio, Manchester City, FC Porto, and FC Barcelona.

Globally, Chiliz ($CHZ), a blockchain fintech provider, was the first to offer fan engagement tokens focused on sports and esports in the European market. Today, there are several Indian startups in the space, including Stan and Fanzee.

“We have an advantage since I don’t think there is any startup that focuses on local sports like kabaddi,” says Siddharth.

The company will do a public launch of its native sports token ($SPN) in August this year and will make them available in various crypto exchanges in September.

Fans can visit the Sportzchain platform, sign up, and purchase tokens, through which they can gain access to various team branded merchandise, participate in activities, and earn rewards. According to the company, the tokens can be traded, as their value increases. Users can redeem them on the Sportzchain platform or any blockchain-based system. The rewards could be physical stadium tours, VIP meet-and-greets, or discounts on merchandise.

Siddharth says, “These incentives not only help fans feel more connected to the team, but they also offer a sense of pride and prestige.”

The Sportzchain platform currently has 1,200 sign-ups from users for its alpha application and is hoping for 10K sign-ups in September. The startup aims to incorporate gamification in the future, wherein users can earn rewards through games.