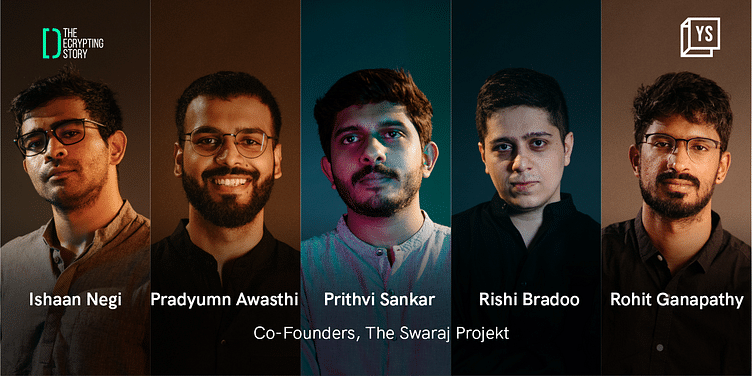 A Web3 native startup, The Swaraj Projekt allows indie artistes to create music NFTs, and earn royalties on their auctions and secondary sales. The platform is also launching NFTs for Volume (1) of its Genesis Collection.

In an industry where trendy and pop music rules the charts, streaming platforms such as Spotify, YouTube Music, and Amazon Music offer a space for indie artistes to get discovered. However, a vast majority of independent musicians find it difficult to rely on these streaming services to earn a living as they receive little in compensation, with Spotify reportedly paying less than a cent per stream.

In conversation with The Decrypting Story, Rohit explains,

“Many indie artistes spend months agonising over their tunes, perfecting lyrics, and blending synth tones, but most consumers today will not pay to download their music. Over the last decade, the industry also saw low-quality music being produced."

The five friends came together to found The ﻿Swaraj Projekt﻿ in 2022. The startup is building an NFT project in collaboration with upcoming musicians. A decentralised music label, it experiments with unique forms of IPs (intellectual properties) that are Web3 native.

The startup intends to engage with the 100 most loyal fans of each indie artiste to invest in their music.

“In the course, the artiste would earn more money than they would have through Spotify or other streaming services. We want to create a fair environment where 100 genuine fans of an artiste would be willing to pay to produce their music, and are attempting to bring back the sense of ownership,” he adds.

Engineers by profession, Rohit, Rishi, Ishaan, Prithvi, and Pradyumn came together to build the Web3 native platform driven by their passion for music and love for technology. Before working on The Swaraj Projekt, the co-founders were building social music discovery app, Humit.

“Rishi is a musician and producer, and his music was featured in the film Detective Byomkesh Bakshy. The rest of us are engineers, and we wanted to understand artistes’ perspectives and build things that elevate their work,” Rohit explains.

The name of the startup has an interesting origin.

“The word Swaraj has its roots in Sanskrit, which means self-rule. It's a way for artistes to unshackle themselves from unfair practices in a conventional record label—whether it’s irregular payment schedules, insufficient venues, or a lack of artist solidarity,” he notes.

The startup enables the creation of NFTs (Non-Fungible Tokens) as handcrafted audio-visual work born out of the collaboration between vocalists, producers, and visual artists. They will be primarily sold through an auction on the Swaraj platform, and users can later resell them on OpenSea or put them on exhibit in their own galleries. Every transaction involving the NFT, which is created by the musician, is stored on the Ethereum blockchain, enabling them to earn royalties on all subsequent sales in the secondary market.

Rohit says, “The primary mint of the NFT will go to the user who bids highest in the auction. The person can now take the NFT to the secondary market like OpenSea and sell it.”

The Web3 native platform is launching NFTs for Volume (1) of its Genesis Collection, where it has collaborated with seven vocalists, five producers, and three visual artists.

“Each music producer creates a bunch of beats which are circulated among the vocalists. Then, two or three vocalists pick a beat, with each of them singing over the beat and creating a unique song. We have 32 unique songs in this collection,” he adds.

The entire collection will be available on the Ethereum chain. Rather than relying on conventional ticketing techniques—plagued by hidden fees, scalping, and counterfeit tickets—the startup instead is using ﻿Polygon﻿ as a secure and viable substitute. It also plans to airdrop NFTs to users, since the gas fees (transaction costs) are relatively low on Polygon.

Airdrop refers to the distribution of cryptocurrency or NFTs sent to a Web3 wallet address for free as a part of a promotion, or as added value for participating in an experience.

Each NFT will have a base price of 0.1 to 0.2 ETH (as of July 26, 2022, it ranges from Rs 11,042.99 to Rs 22,106.06). The startup claims that 75 percent of revenue from the auction will be given to artistes, including vocalists, producers, and visual artistes. The rest 25 percent will go to Swaraj treasury, which will be further used for community-related initiatives.

Other than eliminating middlemen and record labels for artistes, the startup enables users to interact with artistes through The Swaraj Projekt discord channel in the lead-up to the NFT auction. They will also be eligible to own Swaraj merchandise and B-Side NFTs—an audio-visual NFT created from outtakes of the Swaraj Volume 1 collection, but is not part of the final version.

Rohit adds, “Before the auction goes live, we have decided to offer users 1,000 gallery passes to a token gated gallery where people can view music in the Genesis collection. They also get an intimate look into the story behind the song and build relationships with the artiste and music before they head out to buy NFTs.”

Through music NFTs, the startup also encourages artistes to mix or modify content to create innovative content, including fan edits which strengthen the relationship between fans and artistes.

Most songs are composed of numerous layers of sounds and instruments—often referred to as stems. Rohit explains that each stem of the song will generate different NFTs, and people can collect NFTs of each stem and remix them.

“With this, musicians can produce separate versions of the track by altering the lead melody in different ways,” Rohit says.

Globally, American rock band Kings of Leon was the first to release an NFT album in 2021. Since then, musicians and artistes including Emery Kelly, Grimes, Steve Aoki, and Eminem have entered the music NFT realm.

According to Market Watch, the global NFT market size is projected to reach $7,390.8 million by 2028, at a CAGR (Compound Annual Growth Rate) of 24.4 percent.

Besides ﻿OpenSea ﻿, music NFTs can be sold through NFT marketplaces including Catalog, Sound.xyz, Foundation, Beat Foundary, and others.

In the coming days, the startup plans to launch five volumes of the Genesis collection, and the first volume will be launched in the first week of August.

“We are also working on the generative collection and are also planning to progressively increase the reach of the community,” he adds.

The startup plans to onboard and collaborate with many traditional indie artistes in the future.

In December 2021, it raised an undisclosed amount of funding in a pre-seed round led by Antler, and is currently looking to raise funds.