Inside PartyNite, the event world on the metaverse 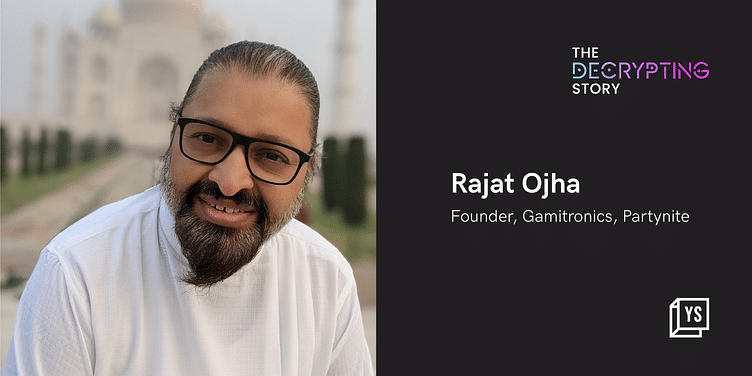 In a conversation with The Decrypting Story, Rajat Ojha, Co-founder and CEO, Gamitronics, talks about PartyNite, and what “India ka apna metaverse”, as the company has tagged it, has in store.

In April this year, the Telangana government, along with the ISRO, unveiled its spacetech framework through PartyNite—a metaverse platform created by AR/VR robotics company ﻿Gamitronics﻿.

In late 2017, Rajat Ojha, and his partners Rajiv Chilaka (creator of Chhota Bheem) and Albert Lai, one of the most successful Canadian game-preneur, started Hyderabad-based Gamitronics.

Last year, they launched PartyNite. As the name goes, it focuses on hosting virtual events and having fun. At present, it has ventured into theme parks, virtual and augmented reality (VR/AR), and robotics and artificial intelligence (AI).

On the invite of the Ministry of Information and Broadcasting (I&B), Gametronics took part in a contingent of Indian startups that represented the country at the Cannes Film Festival 2022.

This month the startup announced the launch of its UAE office in Dubai as part of its expansion plan. The opening is designed to provide support services to its growing client base to largely deal with PartyNite Metaverse and expansion in the space of crypto and NFTs.

Gamitronics has been eyeing the Middle East market for a while now, and the move comes close on the heels of successful big-budget events and brand engagements orchestrated in India.

In this conversation with The Decrypting Story, Rajat delves deeper into the workings of PartyNite, and more.

Walking on water and through pillars: Metaverse app Spatial fails to impress

Decrypting Story [DS]: Tell us about PartyNite. Why did you decide to build it?

Besides largely focusing on having fun and conducting events, we are also starting to showcase the full power of the platform. We built a living breathing city called Utopia, where we enabled ecommerce, education, entertainment, and brand placement.

PartyNite aims to bring people closer, build communities, and also offer custom offerings, where anybody can come and attend events and host parties at the swankiest locations.

However, the network load and scaling to suit a huge population have always been a challenge for the company as users expect a smooth experience, similar to how we operate on Earth. Thus, it becomes a game of scaling up our communication, matchmaking, and data servers.

We work with some of the smartest people in the world. With the work-from-home model, hiring is fairly global for us, and although we had hit roadblocks earlier, we are pretty robust now.

DS: What was the Eureka moment, and how has the product evolved and grown?

RO: In 2014, we worked in a similar space when we created a telepresence solution called DSCVR for Microsoft and a leading private sector bank.

We emphasised a lot on communication and spatial computing, but we had no serious takers besides companies like BOSCH, BMW, etc.

During COVID-19, we decided to build a place for parties as we hosted parties inside the “not party” places like Minecraft, Animal Crossing, etc., and I wanted a pure play party place.

I reached out to my network in Silicon Valley and Europe and got pretty decent feedback. Our productivity shot up during the pandemic as the teams had less of other things to do, and it worked out our way.

We evolved from just a party place to a huge city, with locations, stores, cinema halls, and more. In 2021, we added the blockchain layer as it nicely fitted in the ever-evolving metaverse.

This is how Paxful wants to change the conversation around Bitcoin

DS: Tell us about the team.

RO: I’ve been in the gaming industry for 26 years, and it hasn't been difficult scaling or forming a team.

My top layer is intact for the last nine years, including my studio head and art director, Vishnu Murthy, who has been with me for 16 years now.

We keep a pulse of all the great resources not just in India but also around, and we have worked with people in Germany, Turkey, Israel, and other places.

Rajiv is an old industry connection, and we have known each other for the last 15 years and always wanted to work together.

Albert is a recent addition who came on board for his strategic understanding of Liveops heavy games. We are close to 180+ people right now, and our partner studios support us immensely for any larger undertaking.

We own IPs like Speedy Gun Savage, a blockbuster game in LBE/Arcades globally, with its reach in 150+ arcades. Our other game Kung Fu Dhamaka reached the top 10 charts on Play Store.

DS: What sets you apart from your competitors?

RO: We are a fully functional metaverse. We are not in this for quick bucks and building multiple use cases before people actually understand it.

We have created various tools and templates to conduct events or parties of any kind in a minuscule amount of time. We have also built AI tools for quick avatar creation, speeding up the animation process, and a lot more.

At present, we are closely working with agencies and the government. Our team is also in talks with more than 100 brands. Nearly 30 of them have confirmed their presence on our metaverse.

We, Gamitronics, are a profit-making company, and our annual revenue growth is over 30%. Other monetisation opportunities are selling virtual goods, NFTs, ecommerce, one-time events, concerts, ticketed events, and more.

We have also integrated both crypto and fiat currency for transactions.

It took us over two years to get the first build working, but that was just the start. It's an ever-evolving product, and now, we are a 2.5 years old company.

DS: What are your plans for the future?

RO: We are adding fully functional experience and transaction layers. We are opening it for anybody to be able to buy land and set up stores.

We are also opening a party tool where you can create your parties without our friction.

(This story was updated after making corrections to the category and images in the story.)