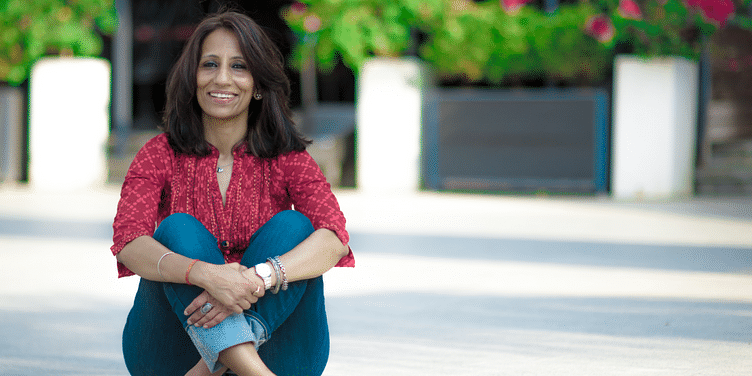 Andwemet.com was founded to help singles aged 25 and above navigate their way through the complex online dating world to find committed relationships. The idea, however, was born of personal experiences. Here’s founder Shalini Singh’s story.

He is fascinated by history and she is a true-blue Bollywood lover.

He enjoys desi cuisines and she likes anything, but Indian.

He is a scientist and she is a marketeer.

Even their mother tongues are different, hence English becomes a compulsory side to all their tête-à-tête. But for those who speak the universal language of love, how does a language barrier or a few contrasting tastes matter?

It was, what they call, a case of “opposites attract” for Shalini Singh, the now-founder of andwemet.com, when she found love at the age of 40. On one hand, her romance was taking flight, and on the other hand, the seeds of a one-of-its-kind business venture were taking root. Shalini, inspired by her personal journey of finding love by taking the most unexpected route possible, decided to build a platform to match singles from across the world who were looking for a committed relationship.

Her matchmaking platform, which saw its beta launch in January 2019 and its formal launch in April this year, already boasts thousands of verified customers. Targeting urban Indians aged 25 and above, the site, as Shalini explains, is dedicated to those “seeking a committed relationship by consciously investing time and effort to find a partner at their own behest”.

A lot can happen over real conversations

“The seed for the idea came from personal experiences which germinated when I understood the value of being in a committed relationship,” says Shalini, who validated the idea beforehand by undertaking a global survey.

“I spoke to around 1000 single people to understand the expectations from a relationship as well as understand why the existing platforms were not in a position to fill this gap,” explains the entrepreneur with a diverse experience across multiple domains.

Prior to starting up with andwemet, in fact, Shalini worked in the education industry as a Kindergarten teacher. The Delhi University graduate then found her calling in the communications industry, working with global brands and even starting her own venture called Galvanise PR.

“My job as a communication professional allowed me to engage with entrepreneurs in promoting their ventures. These interactions gave me an insight as well as confidence to build a venture about something which I strongly believed in,” she adds.

Between ideation and the beta launch (in January 2019), it took Shalini nearly five years to go live with andwemet.com. A platform focussed on signing up genuine members and stirring real conversations around practical topics such as health issues, the concerns of relocation to a city/ country, the need to support parents and so on.

“Our conversation starter questions’ section is designed to minimize emotional heart burn (one of the key insights from our global survey),” says Shalini, who is particularly fond of this section. “This section includes mature discussion around practical realities when in a relationship which are usually discussed after making an emotional investment,” she adds.

How Prince Lakshyaraj Singh Mewar of Udaipur transformed his palace into a luxury heritage hote...

By 2020, India’s online matchmaking industry will reach a whopping $318 million in revenue, as per a Ken Research report. The digital giants catering to this market are plenty, a little chaotic as well. To make space in this cluttered market, means understanding the root concern, and putting a finger on the pulse of the problems. And Shalini was well aware of this.

Before launching andwemet, Shalini undertook one mammoth of a research to find out the concerns of the urban Indians in their pursuit of love. The research took over three years and the took into account, responses from singles, who were further sub-classified into unmarried, divorced, widow/widower, and separated. The mix also included single parents.

Some of the findings from this research, according to the serial entrepreneur, were:

-        They are also looking for acceptance from the society to alternate forms of committed relationship besides marriage.

Keeping these key findings in mind, andwemet attempts to remove the mental clutter in the complex process for finding a suitable match. The matchmaking platform is also inclusive, providing an option to those seeking a partner of the opposite sex or those seeking of the same sex. And conscious efforts have also been put in by the team to filter out fake profiles from the lot.

“We have attempted to solve this holistically, with a mix of technology, processes, and a human-enabled checking,” says Shalini. “For example, our sign- up process has been created in a such a way that it discourages fake profiles and helps to do the first level of profile filtering. In addition, we are in constant touch with our customers and are quick to react if we get to know about any such discrepancies from them.”

“Traditionally being a marketing and a communication professional, I was questioned and mocked by a few on building a product,” says Shalini adding, “and here we have launched it and have close to 1500 verified profiles”.

Today, the mobile and web-friendly platform attracts sign-ups from Indians from all ends of the world. While the user base is currently dominated by women, the teacher-turned-founder hopes that such inclusivity is visible in the age demographics as well.

“Our 25 – 40 years age group is doing exceptionally well. We hope to see more sign-ups in the 40’s and 50’s age group by creating awareness on the product,” she adds.

At the moment, the platform, however, doesn’t charge a sign-up fee to the users. But if Shalini’s words are any indication, her team would soon be eyeing big numbers as they plan to roll out a monetised service for customers in the future. This is besides the andwemet app, that’s all set to be launched next year.

Ask Shalini what’s the plan of action, now that the platform is up and about, and her response is pretty straightforward.

In the near future, she is looking to create an improved product in terms of UI/ UX as well as include elements around values which would help individuals understand each other better before they can connect real time.

And by end of 2020, Shalini, hopes to build andwemet.com to be among the top two matchmaking platforms of choice for urban Indians.

How a phone call from Shah Rukh Khan kickstarted the journey for Vishal Punjabi, the man behind...

Indian recipes with a global twist: MasterChef India food producer and founder of Your Food Lab on experimenting with ingredients