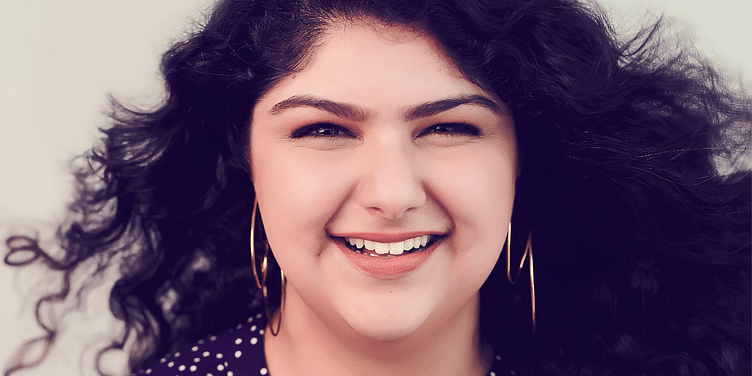 For Anshula Kapoor, stardom is a part and parcel of her family legacy. There’s no escaping from it. And interestingly enough, the 26-year-old, who recently turned an entrepreneur with her fundraising venture Fankind, isn’t trying to escape the limelight either.

Well-aware of this bond with fans and the unfading love and affection that people have showered on the Kapoor khandaan, Anshula is, in fact, using her platform for the greater good. With her one-of-its-kind startup Fankind, the sister of Bollywood actor Arjun Kapoor and daughter of film producer Boney Kapoor, is connecting fans with their favourite celebrities while aiding charitable causes.

And all of this while grabbing eyeballs and a few accolades – Anshula was recently honoured with the MOM Woman For Tech Award at the MTV-IWM Digital Awards.

In a candid conversation with YS Weekender, hear the 26-year-old entrepreneur open up about her business, her family legacy, and why she chose to give acting a miss.

Edited excerpts from the interview

YS Weekender: What made you take the entrepreneurial route?

Anshula Kapoor: It was not a conscious decision but more organic in that sense. I was toying with the idea of trying to do something on my own which would create an impact. Now, because of the family that I come from, fans have always been a part of our periphery and part of our universe. And I always have had a very good relationship with Arjun [Kapoor’s] fans… all of this came full circle at Sonam didi’s [Kapoor] wedding last year. All the positivity and support that fans have shown to my family - that’s actually how Fankind started.

My mom was always a big believer in giving back, so these ideas just came together organically and that was the beginning of my entrepreneurial journey.

YSW: What hurdles did you have to cross in the initial days?

AK: The biggest challenge was being taken seriously. As a 20-something female entrepreneur who doesn’t come from a business family, my first few interactions involved people trying to underestimate either me or my ideas. But I don’t want to look at them as barriers but as learning experiences, that anyone trying to launch their business in India would face.

YSW: In terms of the celebrities who are a part of this platform, you are not only focusing on actors but also influencers; why this decision?

AK: The decision was organic. When I was starting out and trying to get people on board, I tried to go as broad as possible. So, I spoke to directors, actors, actresses, sportsmen, sportswomen, basically people whom at that moment I could approach.

When I met Prajakta Koli (social media influencer), it was all very organic. I happened to work very closely with an associate of hers and I had just met him and we bounced off the idea of working together for Fankind. He mentioned Fankind to Prajakta. In fact, even before Prajakta’s experience was announced, we had so many people ask for YouTubers, TikTokers, reality stars.

So the definition of a celebrity in our country is a lot more fluid. On Fankind, everyone is welcome as long as they want to collaborate with us and they want to give back to their fans and to a cause they believe in. The more the merrier!

YSW: Are there any particular women entrepreneurs, idols you look up to?

AK: Indra Nooyi (Former CEO of PepsiCo) has been a huge inspiration to me. Closer to home, there is Pooja Dhingra (Indian pastry chef and owner of Le15 Patisserie). What she has managed to do with Le15, and everything that she does and the way she thinks through each and every idea… it is with so much heart.

In fact, before we launched Fankind, we had a brainstorming session with her and it was one of the most insightful sessions I have had. And I am always going to be grateful to her for giving me that time from her super hectic schedule. And also, Priyanka Chopra – she is the epitome of everything that an Indian woman aspires to be. She is a Rockstar [laughs].

YSW: Take us back in time, despite being from the famous Kapoor khandaan, you have stayed away from Bollywood – why?

AK: It’s just that I am not interested in acting. I am camera-shy, I get really nervous and scared when I am in front of the camera. So, acting was not something that I ever thought of doing and filmmaking wasn’t something that ever crossed my mind either. It wasn’t so much of a conscious decision, it was more of ‘I don’t think I am comfortable doing it, so I would rather find out what I want to do.’

Also studying in New York for almost four years, a city which is very removed from the world of Bollywood gave me a perspective beyond what I could have imagined. What I had on my mind post-college was very different to what my family does back home.

My dream at that point was getting a job at the United Nations Development Programme (UNDP) and travelling the world with them. Bollywood isn’t something that was on my radar. I feel more comfortable exploring the entrepreneurial journey which I am on right now.

YSW: With Fankind, do you feel like you are 'coming out of the shadows' and creating your own path now?

AK: It was never about 'coming out of the shadows' but more about doing my bit to bring some more joy and happiness into the world. My family entertains people through cinema and I help them meet fans through Fankind. And I also do that by generating revenue for NGOs who are doing great work in the country.

YSW: Also, there will now be fans, especially a lot of young girls look looking up to you – is this an added responsibility?

AK: I actually just try and be as authentic as possible. When I post on Twitter or Instagram, it is from my heart. I haven’t set an agenda about the kind of content that goes out. If just by being myself, I can help young girls and boys in any way. That’s a lot of responsibility but it's also great.

YSW: Between work and Fankind and the celeb circle – how do you stay grounded?

AK: Just being authentic, and also due to my family. If I wasn’t grounded, my brother would pull me back down in a heartbeat. And also, my aunt and my family… they have achieved a lot more than I have and if they are grounded and remain true to themselves, there’s no reason for me to not to be.

YSW: Tell us one thing that your fans don’ know about you.

AK: That I am a homebody. I would rather be at home, reading a book than do anything else. They probably also don’t know that I am deathly scared of the camera. And that for about 18 years of my life, I had a stage fright. So much so, that if I had an audience of more than three people to speak to, even if I wasn’t on actual stage, I couldn’t speak.

I am also a huge fan of Hrithik Roshan, Ranbir Kapoor, and Varun Dhawan. Now I am just throwing it out there [laughs].

At Slurp Studio, these chefs put food in the spotlight as they host team-building exercises for corporates