Art for a cause: How transgender activist Kalki Subramaniam is challenging gender stereotypes 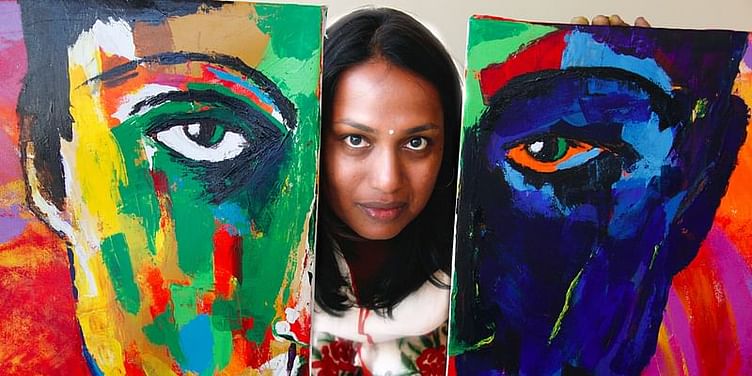 The ‘We are not the Others’ art exhibition by transgender activist Kalki Subramaniam, organised by Sahodari Foundation, will be held at the Bangalore International Centre from February 5 to 7.

“We are not the ‘Others,” says transgender artist and activist Kalki Subramaniam.

Pick up any official form, and check the gender column. It provides three options — Male, Female, and Others. Others usually put the entire non-binary community under one umbrella.

But, Kalki says, “Gender is not just binary. It is multiple and real.”

India’s first-ever transgender artist, Kalki is on a mission to break gender stereotypes that have been prevalent in the country in the name of inclusion.

Hailing from a village located 30 kilometres from Tamil Nadu’s Coimbatore, Kalki was lucky to be born in a family which accepted her for who she is. Unfortunately, most transgender people in the country are not blessed with a supportive family. Kalki wants to help them and be a voice for the transgender community.

Her brainchild, Sahodari Foundation is organising a Transgender Art Exhibition, We are Not the Others, featuring artwork by 25 transgender artists. The art exhibition will be held between February 5 and 7, at the Bangalore International Centre in Bengaluru.

The exhibition will be featuring acrylic paintings, surrealist painting, and pop art paintings. Around 30 of these artworks will be exhibited for sale in the gallery.

Artists including Sriletchu, Hari, Selvi, Prema, Miga and Kalki herself, will be exhibiting their artwork. Arundhathi Nag, Founder of Rangashankara Bangalore, will be the guest of the honour.

Where it all began...

Sahodari Foundation is a pioneer organisation in India and has been working on social empowerment of the transgender community of India for more than 12 years now. Kalki held her first solo art exhibition back in June 2016 at the Alliance Francaise, Trivandrum.

“I sold 12 of my artwork through a crowdfunding platform and raised Rs 2 lakh,” Kalki tells YS Weekender. Following the sale of the paintings, Kalki donated half of the proceeds to four transgender women, for their education.

The two master’s degree holder was invited by the Harvard Business School in February 2017 to represent the Indian transgender community and speak on behalf of sexual minorities.

“During my trip, I visited the Museum of Modern Art, Los Angeles County Museum of Art, and several other art galleries. It gave me the ideas for the possibility of introducing art practice of our community,” she says.

After returning to India, Kalke launched the TransHearts Art Project and organised her first workshop in Coimbatore, in which 10 transgender people participated. “My queer artist friend Hariparthan and I travelled to several cities and small towns, mobilised the community and offered free workshops,” Kalki adds.

So far, more than 300 trans people have participated in the workshops. The Sahodari Foundation supports artists by providing them with all the art supplies and materials, and by exhibiting their artwork in galleries and online for sale.

The first group exhibition of the transgender and gender fluid artists were held in June 2017 at the Art Houz Gallery, Coimbatore. More than 75 artworks by 70 artists were exhibited.

“All the sale proceeds were given to the artists,” Kalki says.

Ever since then, Sahodari Foundation has organised workshops and art exhibitions in Arthouz Gallery, Ganga Hospital in Coimbatore, Alliance Francaise in Trivandrum, British Council Chennai, Central University of Thiruvarur, Varakoottam in Makkalidam, and American College in Madurai, among others, collaborating with more than 80 artists.

Kalki says there are always new artists from the transgender community to collaborate with. While there are no specific criteria to shortlist the artists, Kalki says “I look for originality.” Even when an artwork is inspired or copied she says, “They have to be much better than the original.”

For Kalki, art need not be technically realistic. Creativity and storytelling is what counts.

We are not the Others

For the next art exhibition, Kalki has collaborated with transgender artists from across the country. Additionally, for the first time, Sahodari Foundation is using Augmented Reality (AR) and Virtual Reality (VR) technology to provide the visitors an immersive and meaningful experience.

The foundation has partnered with UniteAR App to offer AR experience. For the VR tour, it has partnered with Shimeraa Visual Studio. “Visitors at the exhibitions will be able to walk through my pop art paintings in a Roman architecture style gallery using Oculus Glasses,” Kalki explains.

The exhibition is fully supported by Inner Wheel Club of Bengaluru and its President, Prema Aiyer. Interestingly, Kalki herself will be using poetry, movement, and colours to perform on ‘Phallus, I cut’ and challenge gender stereotypes.

With the ‘We are not the Others’ exhibition, the artist wishes to, “Knock and open Pandora's box of opportunities in the art for the trans community. Art and creative practice can bring enormous support for their livelihood,” she says.

Moving forward, Kalki plans to reach out to transgender people in Northeast India and understand their artistic practice. She wants to take the Sahodari Foundation’s artists for cultural tours for extensive learning about art.

“Our country is vibrant with a hidden treasure of stories and talent from the hijra and transgender community. I want to explore that and celebrate those people. I want to create an archive of our community's art and stories. I am already working on that,” Kalki says.