Struggle is a romanticised word; all you need is one good idea, says National Film Award winner Hardik Mehta 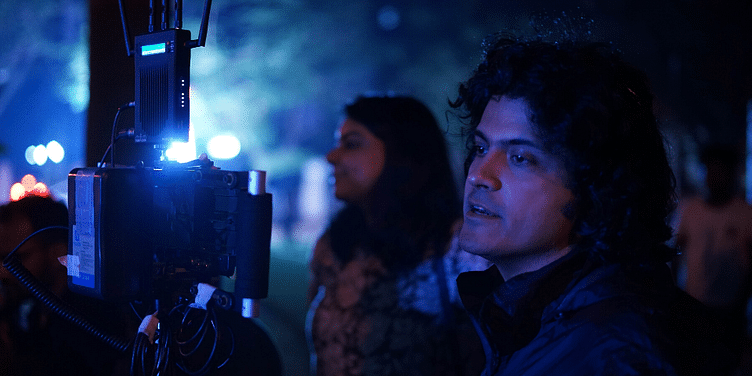 Known for his work Amdavad Ma Famous, National Film Award winner (non-feature film), Hardik Mehta never planned to become a director. As his movie Kaamyaab releases this weekend, YS Weekender caught up with him to chat about his new movie and his journey in the film industry

"You cannot quantify success, it is something which makes you feel happy,” says Baroda-boy Hardik Mehta, whose movie Kaamyaab has just hit the box office. Talking to the YS Weekender in an exclusive interaction, he says,

“Kaamyaab is an ode to Bollywood. It depicts the lesser-known world of supporting actors who add zest to a movie but are easily forgotten.”

As a child and a teenager, Hardik would watch Hindi movies on television, and was always fascinated by Bollywood actors. He used to imitate various artists to entertain his fellow schoolmates. However, at that time little he was not aware that a few years down the lane, he would be standing right next to those celebrities and directing movies for them.

Baroda to Delhi, and then Mumbai

Hardik was born in Rajkot but raised in Baroda. He is from a family of music and movie lovers who inculcated in him a passion for Hindi cinema.

“During my summer vacations I used to sit and binge-watch movies that were being telecast on channels like Star Gold and Zee Cinema,” says Hardik. “My father is a fan of Hrishikesh Mukherjee's movies and as a family, we never missed watching them.”

However, he did not imagine that he would become a movie director someday.

Hardik did his graduation in Dairy and Food Technologies and worked in Surat-based Sumul Dairy. But the job did not appeal to him. And, it was at this company, that he realised that he needed a more creative job in order to enjoy his life.

“I have always enjoyed writing. Sometimes I would write a bit of short prose or a shayari, but I never thought that I would opt for writing as a career.”

After spending some time at Sumul Dairy, Hardik came back to Baroda and joined an advertising agency as a copywriter for Rs 5,000/- a month.

Once he got into the advertising industry, he had the urge to explore more such avenues for work. So, he packed his bags in 2008 and left the company to study in Delhi’s Jamia Millia Islamia University.

“Jamia is a go-to university for all Mass Media aspirants and I also wanted to go there. But I made a blunder during the interview round by giving an inane answer to one of their questions.”

Hardik cleared the Jamia selection process the following year and eventually got his Master’s Degree in Mass Communication. While he was in his last semester, he started looking out for work. While he was hunting for some work, New York-based Indian filmmaker and screenwriter, Dev Benegal visited the Jamia campus to conduct a workshop. This was grist for the mill for Hardik as he was on a lookout to work with a director who would give him a break in the film industry.

“I just wanted to join the production segment one day, but at that time, I would have even worked as a tea boy to just see how a movie shooting is done in Mumbai,” he recalls.

After a while, in 2009, luck favoured Hardik and he got a call from Dev Benegal and was assigned as the script supervisor in the Abhay Deol starrer Road. After that, there was no looking back.

After working for Road, Hardik bagged the opportunity to work for director Vikram Motwane in the movie Lootera.

“When you enter the industry, you get to know many things and you make many contacts. I was on the lookout for more work when I heard that Vikram Motwane was looking for an assistant director.”

When Hardik approached Vikram, he got an offer to work as a script supervisor instead.

“The role of the script supervisor is very difficult as you need to rehearse the script with the actors and take care of the scenes. It is a tedious job. People usually don’t want to take to up a job like this but, I didn’t want to lose even a single chance in the industry. So, I decided to take it up.”

After Lootera, Hardik worked as a script supervisor for the movies Queen and Mausam. But, by then, he was aiming for bigger things and wanted make movies.

Hardik had already worked with the leading names in the industry and now he wanted to create a distinct identity by directing a movie. However, this required a lot of funds.

“I was eager to make a movie but I was still very new to the industry. One day during a discussion with Vikram and Anurag Kashyap, they suggested that I should try to make a short film which would give me both experience and exposure in the industry.”

The idea astonished Hardik and he decided to search for a perfect topic for a short film. Eventually, he went back to his roots and decided to shoot the Gujarat Kite Festival and directed the short film- Amdavad Ma Famous in 2015.

“Amdavad Ma Famous is about the four-day kite festival that is conducted in Gujarat. It took us two years to complete the shoot and post-production took eight days. I was both the producer and the director of the movie.”

Amdavad Ma Famous was an instant hit and it bagged the National Film Award for the best Non-Feature film.

“I had never thought that this movie would make such a great mark. My wife Akanksha and I travelled to the US for the first time to attend the film festival where Amdavad Ma Famous was to be featured.”

After the huge success of Amdavad Ma Famous, Hardik co-wrote the movie Trapped in 2017.

In 2018, he started working on his first movie Kaamyaab as a director starring Sanjay Mishra which has won many international accolades and released on March 6 in India.

‘Struggle’ is a romanticised word

Talking about his struggles in the Bollywood, Hardik says, the word 'struggle' is romanticised nowadays.

“Struggle is a wrong and very romanticised word,” says Hardik. “I would rather put it as lack of getting the right opportunity. You see, the doors are wide now, but it is up to you to unlock the treasures inside. It is easy now to meet directors and put across your idea. However, one must know how to utilise that short span of a meeting with an interesting idea.”

To be a good director, Hardik says one must consider every movie as his/her first movie. Every Friday, when a new movie is released, fortunes keep changing, and one must always have new ideas to work on.

After packing up the production for Kaamyaab, Hardik started working on Roohi Afzaana which is set to release in June. The movie, starring Raj Kumar Rao and Jhanvi Kapoor is one of the first most awaited commercial releases for Hardik.

Hardik is also looking to work on some web series and short films as he feels a director should keep making short films as these movies are very popular now.

“I made Kaamyaab with the emotional connection that I had with the well-known veteran actors,” Hardik adds. “Roohi Afzana is a commercial release and my second big opportunity as a director to win the appreciation of my audience.”