Get me out of here! Discover the new gaming craze in the country 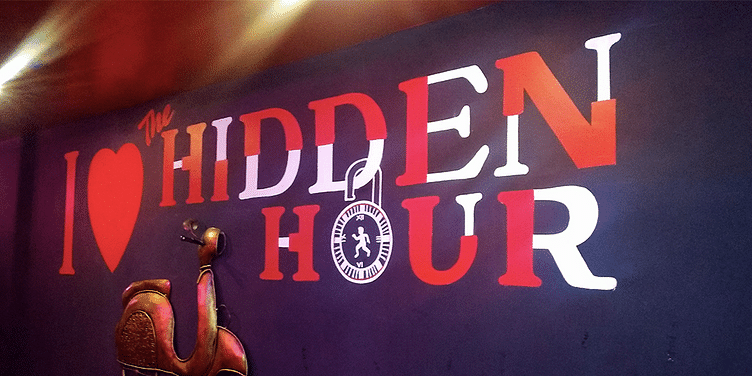 If you love the concept of 'Escape Rooms', you don’t need to travel to another continent to play this game anymore. Here’s a lowdown on what 'Escape Rooms' are and why they are so popular in the country today

Sixty minutes. One room. A set of clues.

Now, figure out how to escape.

This is the premise of The Escape Room, a popular game that runs to the pulse of a ticking clock and relies heavily on your intelligence. You have to escape from the locked room in an hour by following the clues within a given time span. Your mission could be as thrilling as diffusing a bomb, as scary as dealing with paranormal activity, or as puzzling as solving a riddle in a few minutes, but you have to complete the task in an hour in order to leave the room.

Traditional gamers love escape rooms like they do most games of intrigue, but they are not the only ones who are addicted to the adrenaline rush of solving puzzles under a time crunch. People of all ages can be seen at these rooms enjoying the excitement of finding out how to escape from a room with only clues to help you out.

When YSWeekender caught up with Ankit Agrawal, Co-Founder, The Hidden Hour, the Escape Room game that has spread its tentacles to many cities, he spoke about the popularity of the game, how it has captured the imagination of people across the world and how he went about creating these rooms and building the business with his co-founder, Aman Goel.

What is the concept?

“The Escape Rooms are real, theme-based games during which a playing team is locked inside a room and has to escape from the room within a given time frame by solving riddles and discovering clues,” says Ankit.

This trendy game has recently entered the Indian subcontinent and is already high on the popularity charts of most gamers.

At the Hidden Hour, the organisers have created eight different theme-based games like a scary haunted hostel, an adventurous journey to an island and a treasure hunt to find a priceless treasure, among others. These real-life escape games are for gaming and adventure enthusiasts from the age groups of 7-70 years. It's a perfect place for family outings, get-togethers, birthday parties, team building exercises, and corporate events.

Ankit goes on to explain the game in detail. “An ordinary room is converted into an exciting theme-based set-up to give a real-life gaming experience to the players,” he says. “The primary goal is to escape the room within an hour to be able to win the game.”

Among the popular games, themes like Bomb Diffusal, Treasure Hunt, Haunted Hostel, Lost in an Island, The Last Halloween, Kaala Paani, Wonderland and Prison Raid are the most loved. “Every theme has its own set of challenges and the players are left amazed with the ambience and the setup of each room. With each challenge the team overcomes, they get closer to their aim of ultimately reaching their final goal,” explains Ankit.

The Hidden Hour games were created keeping one main thing in mind – the makers wanted to let the players escape from the real world and enter a wonderful world of fantasy.

Escape games comprise fascinating activities like passing through a tunnel, crossing laser mazes, mostly inspired by thriller and sci-fi fiction movies and books. These scenes aren’t easy to set up and a lot of technology and automation goes being given a stunning experience to the audience. Appropriate light and sound effects also play an important role in providing the immersive experience of the mission

The concept of escape rooms was created by a Japanese company some years ago where players would physically play in a themed room and accomplish the mission to escape within the assigned time. Escape Rooms came into India a few years later.

After winning Miss Universe at 22, how Lara Dutta hustled her way to build a beauty & skincare ...

In the last four years, real life escape games have become tremendously popular amongst the Indian millennials, as youngsters are always looking for fun ways to spend time with friends and interesting activities.

The Hidden Hour was launched in early 2016 and ever since, it has not waned in popularity.

“It was a unique concept which not a lot of people had experienced but created the same level of excitement across all age groups,” Ankit recalls. “When we talk about the entertainment sector there are very few options and activities like watching a movie, bowling, etc. which are quite common. But we felt there was a big gap in this industry and decided to step in.”

Within three months of launching their Escape Rooms, Ankit and Aman witnessed a footfall of more than 5,000 and they hosted more than 30 corporate events and birthday parties. By 2017, a lot of improvisations and enhancements were done, based on the feedback received from the audience and it eventually became a popular destination for fun with family and friends.

They created themes to suit every age group to design new and adventurous themes. After experiencing an outstanding response in Gurugram, they decided to open new centres in Hyderabad, Pune, Delhi and will soon be branching out to many other cities.

Ankit says the idea came to them when they were working as professionals in various companies and they would be taken for corporate outings.

“The most common activities were either watching a movie together or a team dinner or clubbing. We observed that a lot of people would get bored during these meets. Aman and I decided that there should be a place where people could go for team outings. That is how we came up with the idea of real-life escape games,” he adds.

According to Ankit, the concept of escape rooms provides a healthy break from the world of gadgets. “These games not only enhance logical thinking capabilities but are also a relaxation from the screen time. They are also a great way of amplifying relationships and bridging the communication gap amongst the team members.

The entertainment industry is a very interesting yet harsh sector to be a part of. At present, in the established market, maintaining the innovation in the business and satisfying the audience with power packed entertainment is one of the most challenging goals to accomplish. “Aspiring entrepreneurs who are planning to make a debut in this industry should spend a lot of time in market research and building connects with the industry veterans to learn from their experiences,” says Ankit.

Talking about the initial investments in such ventures, these centres come with high rentals as one has to opt for a commercial area with preferably high foot falls. One should be prepared to witness minimal attendance on weekdays (mostly Monday – Thursday), and should have additional plan for these like a small café or a dedicated party area along with the gaming arena. Hence, it is imperative to take all these elements into consideration before entering into the sector.

Life lessons from the Escape Room

“The two very important lessons we have learnt from escape rooms and our entrepreneurial journey are: ‘Being Perseverant and Resilient'. It is important that you don’t give up when you start doing something. You must aim to finish the task,” says Ankit, adding, “Failure is a part of life but what is more important is to remember that it’s just a road bump and not the end. Turn your failure into motivation and keep moving ahead.”

Since a lot of teamwork is required, these games are a perfect way to bridge the communication gap, magnify communication skills and ethics of teamwork. Learning time management and performing under stressful situations are also key acquirements from the activity.

The company is launching six new games in the coming months. Their target is to reach 20 centres by end of 2020. “There’s a lot of focus on technology now and we have a dedicated team working on this at the backend. We are planning new ideas in our Escape rooms and enhancing the experience of the customers by making the games more immersive in the future,” he says.