For 60 years, this iconic Delhi bakery has been satisfying cravings with 300 products 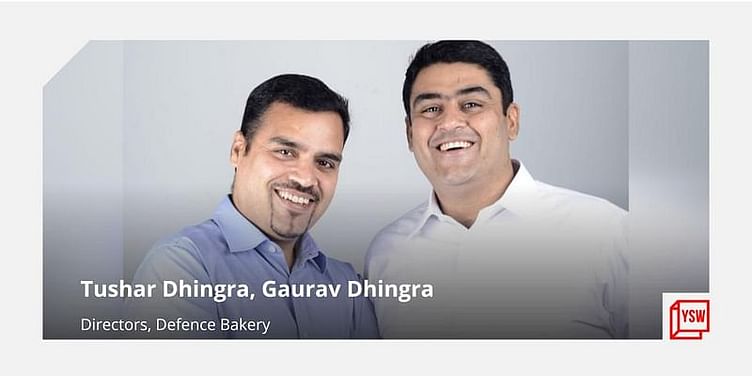 Defence Bakery started its journey as a friendly neighbourhood bakery in 1962, and has since expanded to multiple outlets across Delhi-NCR with over 300 products on its menu.

Before the liberalisation of the Indian economy opened the doors of our country to the world and its many brands, a treat from the local neighbourhood bakeries used to be the highlight of our simple lives.

Those who grew up in and around Defence Colony in the heart of Delhi favoured ﻿Defence Bakery﻿ above all others. Having opened in 1962, this small business has grown by leaps and bounds in the last 60 years, with three outlets spread across Delhi-NCR, and a sub-brand serving Italian cuisine called Alma Bakery and Café in Noida.

“Defence Bakery is a neighbourhood bakery of choice, where you can sample an international palate refined by master chefs using local ingredients to enhance its value pricing. Defence Bakery’s foundation rests on innovation, skilled and diligent employees, and a commitment to responsible growth and development for the wellbeing of the community. We truly believe this humble approach has led to our growth and in 2022, we celebrate the 60th anniversary of our #gloriousjourney,” share Gaurav and Tushar Dhingra, third-generation proprietors and directors of the brand in a chat with YSWeekender.

Jagdish Mitra Dhingra belonged to a family of bakers from Multan. Before the Partition and Independence, some of their products were staples in the Indian soldiers’ kits. In 1962, after a short stint in Mumbai, he moved to Delhi and started Defence Bakery as a wholesale enterprise. At first, he lived in the narrow lanes of old Delhi, from where he would cycle to Defence Colony in the south.

In the 1970s, his son Dalip Kumar Dhingra joined the business and together, they reinvented the business model into a high-quality bakery, confectionery, and chocolate shop.

“Defence Bakery became a place where everyone would grab a delicious snack or stop by for a chat with ‘Dalip Uncle’. In the 1980s, the Defence Colony market became a happening spot for Delhiites from different walks of life. A number of journalists, artists, actors, lawyers, and students would frequent it. Defence Bakery became a one-stop shop for everyday staples and treats. Our father, being a professional baker himself, experimented wildly in his kitchen, recreating international tastes with local ingredients. This is how our pizza bases and atta bread came about,” explains Gaurav.

Then in 2000, both brothers joined the business and spurred its growth further. Gaurav is a trained hotelier from HIM Montreux, Switzerland, and Tushar is a professional pastry chef trained at the Welcome Group School of Hospitality in Manipal. He refined his craft at Cordon Bleu in London and worked with Michelin star chef Pierre Gagnaire at Sketch in London before moving back to Delhi to take on the role of Executive Chef at Defence Bakery.

“Our product line has evolved over the years, and we still do research and development on new or existing recipes every week. Today’s line-up includes a well-balanced repertoire of national and international favourites and currently, we have more than 300 products to offer. All our recipes are researched and standardised because we believe baking is a combination of art and science in our laboratory – the kitchen,” shares Tushar.

The brothers fondly narrate the stories behind some of their iconic creations. In 2019, they sourced a sourdough starter recipe from a Polish baker friend. With the onset of the pandemic in 2020, Tushar was able to develop and perfect the recipe, diversifying it to include different starters including black wheat, amaranth, fresh fine herbs, and others.

In 2001, baguettes were not popular in Delhi because the ingredients were imported, leading to steep pricing. Their team developed a recipe using local flour from Madhya Pradesh, and introduced the ‘stick baguette’ first before moving on to the sourdough French baguette. Interestingly, Chef Tushar also found a way to use the leftover baguette and created garlic toasts, which became a hit with customers.

“Back in the 90s, our father was keen to create a treat which was good for the Indian palate but wasn’t a mithai. He tried and tested many sweet combinations with us. Finally, he created honey cookies, which are the most sought after treats, especially during festivals. We munched on honey cookies every time someone came home, and everyone was just hooked on them!” recalls Gaurav.

When asked about their signature product, Tushar says, “It’s like asking a parent - which child of yours is better? Each recipe has been carefully crafted and every product tastes really good. However, in the cake section, we can talk about truffle cake which is tried and tested by generations. In the snacks category, we must mention the classic pulled chicken and mayo roll and patties. For breads, we need to mention our Atta Bread, which we developed from scratch and which has stayed consistent since the 80s. During the development of that recipe, our father became aware of the carcinogenic effects of bromate - a permissible ingredient as per FSSAI food safety standards of India, but harmful to our health. We consciously don’t use this ingredient in our products.”

Data published on expertmarketresearch.com highlights that the Indian bakery market stood at a value of nearly $7.60 billion in 2020. The market is further estimated to grow at a CAGR of 8.5 percent between 2021 and 2026 to reach a value of $12.39 billion by 2026. Legacy players like Defence Bakery who continue to innovate and evolve, are best placed to ride this wave.

Speaking about their diversification into the restaurant business with Alma Bakery and Café, Gaurav says,

“We found a great location in Noida, and a team of people who shared our dream, and so Alma was born. It has already made a name in Noida and we are extremely grateful for the support of clients from the neighbourhood and beyond. The menu is continental with an Indian twist. We include a lot of local ingredients in our international recipes. For example, our risotto is made with palakadam matta rice from South India, and the Napoletana pizza has paneer tikka toppings.”

A dedicated logo has been designed to commemorate Defence Bakery’s 60th year and several activities are planned including contests, giveaways, and special menus for festivals highlighting heritage recipes.

Tushar explains, “Our Founders Day will be celebrated on August 2 and we are planning a grand activity. It’s a way for us to express our gratitude to everyone for being with us and supporting us all the way. Going forward, our vision is to be the preferred bakery and confectionery in every neighbourhood. The first phase of our action plan is to expand through Delhi-NCR. Our online presence is also growing and Defence Bakery products are available on various aggregator platforms as well as on its own online shop. We are also working on refining the franchise model, in order to grow with like-minded individuals.”

For this Goa-based eyewear brand, sustainability is its top priority