The Heritage Keeper: Meet Ratish Nanda who was instrumental in restoring Humayun Tomb and Sunder Nursery in Delhi 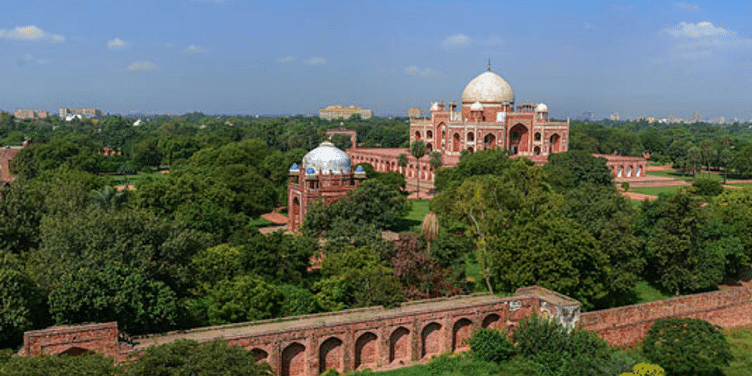 Restoring monuments and parks are all in day’s work for Ratish Nanda, CEO, Aga Khan Trust for culture. He is responsible for some of the most fascinating restorations in the country and abroad

In a city as populated as Delhi, there is a certain charm in rediscovering open spaces as it is a sensorial treat. One of the newest hot spots in Delhi, the Sunder Nursery, a 16th-century heritage park, spread over 90 acres and dotted with water bodies, splendid monuments, and greenery, promises to be just that. It is popular place for people from all walks of life and has already found a place in Time Magazine’s widely recommended, ‘The World's 100 Greatest Places to Visit list.’

The man instrumental in reviving Sunder Nursery and monuments such as the Humayun Tomb, is Ratish Nanda, CEO Aga Khan Trust for Culture. In conversation with YS Weekender, Ratish speaks about his passion for heritage buildings and his ongoing work in the field of architecture.

Ratish earned his M. Architecture degree in Historic Building Conservation, from the University of York.

"As an architect, I was fascinated with the beauty and the timeless character of structures built in India till a century ago,” he says. “A chance to work with the Aga Khan Trust was God sent."

The opportunity to work with the Aga Khan Trust brought along interesting prospects to work with and around historical monuments for Ratish, who now uses his knowledge to bridge the gap between the past and the future.

The Aga Khan Trust for Culture helmed by Ratish, has been engaged in creating open spaces just like the Sunder Nursery model across the world with parks now open to the public in Kabul, Edmonton (Canada), Mali, Cairo, amongst other cities.

In the two decades of Ratish’s work life, one of the first initiatives for the Aga Khan Trust for Culture was to restore the now buzzing gardens of Humayun’s Tomb – a World Heritage Site. It was a gift from His Highness Aga Khan, the current Imam of Nizari Ismailism to commemorate the 50th anniversary of India’s independence.

"Since then we have been engaged, in partnership with the Archaeological Survey of India, Central Public Works Department, and the South Delhi Municipal Corporation to undertake the conservation of almost 60 monuments in the Humayun’s Tomb – Sunder Nursery – Nizamuddin Basti area of Delhi," says Ratish.

The other landmark project, the Sunder Nursery, has been designed by landscape architect M Shaheer and it is fascinating to experience the congruence of nature, heritage and nursery functions that have been created post the restoration work.

The design has used traditional materials and landscape traditions. Both the conservation of monuments and the landscape design of Sunder Nursery utilises stone carving skills in sandstone and marble, stone and brick masonry in lime mortar.

“In India we are fortunate that craft skills have been passed down through the generations for thousands of years. The implementation of conservation and similar works utilised 14,00,000 man-days of work carried out by master craftsmen,” he adds.

An initiative of this scale required the support of the local community, government agencies and partners as diverse as the Ministry of Tourism, Tata Trusts, InterGlobe Foundation, Havells, American Embassy and many more, all of whom were brought together to work with the Aga Khan Trust for Culture.

Sharing his vision, Ratish says, “A green space that is of significance to a whole city is very valuable, especially in a city with a population of several million. The Delhi project has allowed us to demonstrate how conservation can lead to improved socio-economic development and can be coupled with ecological restoration, which is not simply an elitist undertaking. It’s a model which we hope will be replicated by others across India."

Meet these mompreneurs of igraasp, who have a channel for kids by kids

While working with monuments and forgotten spaces, there are pleasant surprises along the way, Ratish tells, "There have been times when the team discovered pure gold and lapis paintings under layers of cement (Sabz Burj in Nizamuddin), or a tunnel under a Baoli, or 17th century children's toys while planting a garden, and even original patterns of tile decoration of a rooftop canopy."

When working towards nation building, the scale of the projects and its diverse components at times become challenging. “It’s all very exciting. From conserving 300 acres in the national capital to fulfilling the Sustainable Development goals and many diverse government objectives – like building health, sanitation and education infrastructure, creating jobs, increasing tourism revenue, besides actively conserving,” he shares, giving insights about his work.

"People asked me to leave when I first came to Bombay to become a comedian": Vir Das

A stint in Kabul

Ratish’s international stint has been equally exhilarating. For five long years he was based in Kabul for the Aga Khan Trust for Culture, restoring the 16th century Baghe Babur (The last resting-place of the first Mughal emperor Babur).

"I think conservation in the war-torn Kabul was more meaningful than anywhere else and I feel the project is a visible proof of how creating green spaces and restoring national monuments can help heal the wounds of war," he reminisces. Fascinating as it may sound, today, there are over 30,000 visits to Baghe Babur every week, mostly women, who have made the garden their refuge in the city.

Currently Ratish and his team are working on a project at the Qutb Shahi Heritage Park at Golconda, Hyderabad in partnership with the Government of Telangana for the past five years.

There are over 80 monuments that are being conserved and 106 acres of landscape restoration being undertaken with a plan to create a site museum. It will surely be another moment when person after person will walk into a restored monument and be filled with awe and wonder.

A guide to a healthy mane: 8 hair care tips from a dermatologist

‘Live like a legend’: Soumajit Bhowmik, Co-Founder and CEO, Styched