"I love my work way too much to treat it as a job," says actor Shefali Shah

After her breakthrough performance in movies like Satya and Monsoon Wedding, Shefali Shah is hitting the headlines for her powerful performance in latest Netflix series Delhi Crime, where she plays DCP Vartika Chaturvedi

“This is what I have waited for,” says actor Shefali Shah, about her role as a police woman in Delhi Crime, the latest web series to hit Netflix. And in that one phrase, the talented but under-rated actor says a lot.

Shefali believes that with OTT platforms and web series, characters like hers in Delhi Crime have become the centre of the story, getting a rich and layered treatment.

“These are characters; it’s not about stars,” stresses Shefali, speaking to YS Weekender on the web series, which is also the first Indian series to have its World Premiere at the prestigious indie flagbearer – the Sundance Film Festival 2019.

“Mediums like these open up avenues for actors, who are otherwise only seen as ‘character actors’,” she rues. While Bollywood films have become more women centric now, she says, earlier it was only restricted to the ‘heroine’. “I don’t mean to negate the term, but it was a set conventional pattern -- to look pretty and be the supporting cast for the hero.”

One will mostly remember her from the 1998 gangster flick Satya, or the hugely popular TV series Banegi Apni Baat in the early 90s, when she was Shefali Chhaya. Later, in 2001, she delivered a breakthrough performance in Meera Nair’s film Monsoon Wedding, where she played an adult who deals with her childhood molestation and outs her molester to protect another child in the family.

Also read: How Hari Menon of BigBasket lets his passion for music tune out the stress of entrepreneurship

In 2007, she also received critical acclaim and won the National Award for the Best Supporting Actress for her performance in Rituparno Ghosh’s The Last Lear. But it was much later, in 2015, that we all again sat up and took note of her in Zoya Akhtar’s Dil Dhadakne Do.

The series follows the DCP as she leads investigations to capture the six rapists in 72 hours.

“As a woman – and all of us women who got affected by this rape – my reaction at that time in 2012 was anger, outrage, pain, and the need for revenge…,” says Shefali.

“But as the character Vartika, all this had to be channelised and focused to just get those rapists. This was a story that needed to be told. In 2012, everyone was shaken and scarred. Not just in India, and not just as a woman,” says Shefali, speaking about why she chose this role. She did not know what happened behind the scenes, and the series was an eye opener for her.

“It became this one woman’s personal agenda to find those rapists, and it was her victory.” Shefali reiterates how the series director, the Indo-Canadian Richie Mehta, had ensured extensive research for over four years, looking at case files, verdicts, and interacting with people involved to keep the story authentic, despite it being a fictionalised account.

Shefali says, she invested a lot in the role emotionally. “For me, there is no other way of being involved in a role…it was consuming and exhausting. But creating it was gratifying and enriching. This one was almost like an answer to a lot of questions we asked and never got before.”

According to Shefali, the biggest challenge with this role, as with depicting any real person, is the extreme sensitivity and precision she had to ensure. For this, Shefali met up with Chayya Sharma, on whom the character of Vartika is based on.

“It’s a delicate reading between what was, what she is, and how I interpreted the situation. I’ve never seen her in office and don’t know what she went through…it’s a delicate balance. I had to depend on my instinct and emotion, but respect what inherently happened,” she says.

But whenever Shefali had any queries, she reached out to Sharma. “I would call her even for the smallest things…anything to create Vartika and the circumstances. I was lucky to have her give me inputs,” adds Shefali.

Shefali agrees she’s been extremely picky about her roles. In 2006, she was part of the multi-starrer 15 Park Avenue Street directed by Aparna Sen. She played Kasturba Gandhi in Gandhi, My Father, for which received the Best Actress award at the Tokyo Film Festival in 2007. In 2008, she worked in Subhash Ghai’s Black & White.

In late 2018, Shefali landed another mature role in the Indo-German film Once Again - an unusual love story between Tara, a widowed mother who runs a small restaurant, and one of her customers, a popular film actor called Amar.

“A role has to instantly appeal to me. It has to be a spontaneous reaction. I have been picky, yes. If not more, the next role has to at least match up to what I have done earlier. I love my work way too much to treat it as a job,” she declares. While TV let her career take off initially, she says it stopped working for her when it only became about TRPs, quantity of episodes, “and killing off characters” to suit these needs.

A successful stage actor, Shefali is married to filmmaker Vipul Amrutlal Shah, and has acted in his film Waqt: The Race Against Time in 2005.

Speaking about her plans for 2019, Shefali says, Netflix is already planning Season 2 of Delhi Crime, and she is looking forward to it. 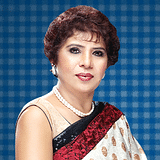 Beauty and the best: How Dr Bharti Taneja embraced beauty with her venture Alps Beauty Clinic and Academy