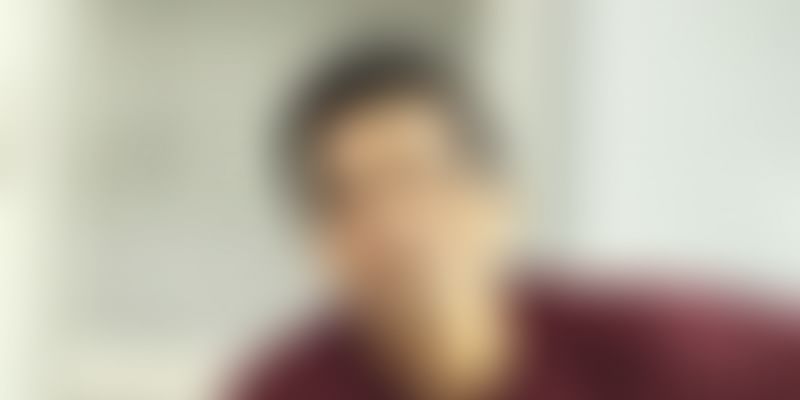 Known to have essayed the role of the real-life stockbroker in the series Scam 1992, Pratik journey into stardom has been long and yet completely fulfilling.

Heartbeat racing, sharper focus, and vision, blood pumping in double speed along with several others around you. This is the scenario that any trader is familiar with and would describe as the good old adrenaline rush that comes with trading on the stock market, which simply cannot be replicated.

Yet, Pratik Gandhi, an actor, engineer, and performer was able to replicate the rush of the stock market while playing the role of a real-life stockbroker - Harshad Mehta in the Sony Liv series - Scam 1992, directed by Hansal Mehta.

There is little need for introducing the series or the actor anymore. Both have shot to fame, very much like the market graphs that the show portrayed.

As a performer, Pratik’s ride has seen its fair share of dips and rises.

Gone are all traces of the super confident, slightly arrogant, and strong-willed stockbroker. In a video call, I am greeted with a simple, humble, actor, who seems to simply love the art more than anything else. Seeming to echo my thoughts, Pratik says, he is nothing like Harshad Mehta, when asked if there were any similarities in the character.

“We wanted to humanise the character and wanted to approach the character without any bias. Harshad was completely convinced about whatever he did. Whenever I was delivering the lines, it was with complete conviction because Harshad had that,” says Pratik.

Though different from the character he played in Scam 1992, Pratik says, he was very intrigued by the character and his zeal to dream. But he could never agree to the arrogance, greed, and ego that was an integral part of the individual. Pratik adds.,

“Harshad was a charmer. I don’t think I can charm anyone the way he could and talk people into doing things they were reluctant to do. But I learnt one thing - Don’t stop dreaming and don’t stop working towards it relentlessly. You should be at it. But at the same time be very aware when your dream is turning into greed. That is when you should stop.”

While Pratik has worked in television, films, theatre, and other performances, working for a series like Scam was different.

“It is an interesting challenge that I explored during this shoot. In theatre, you live that character for 2.5 hours straight. In films, it is for 25 to 45 days and you are done. Here I had to live that character for 90 days over a span of 6 months. It isn’t a two-hour movie but a 9.5-hour film. There are suddenly a lot of things riding on your shoulders. But the more you spend time with the character, the more nuanced your performance gets.”

Pratik began his acting career with theatre. There is no doubt that the actor still has a soft spot for theatre. A passion and drive seem to get into him while describing this art form.

“Theatre is my place, be it dance shows, or any form of performance. This is where my heart lies. It is the most basic art form.  It is the art that comes from the heart. It is a live medium there is no margin for error and your real mettle is tested. It disciplines you as an actor and makes you superhuman.

Each show is different. In one show of the same play, you may get a standing ovation, the next show, your role may just not work. It is an actor’s gym, that makes your acting muscles stronger, and then you get something like Scam one day and you can hit a knockout punch.”

The actor who became an engineer

An engineer by education, Pratik’s love for performance and acting started when he was in class 3 in his hometown Surat. Though acting was always a part of life, it wasn’t a career option. As he was from a family with an academic mindset, the cookie-cutter route of his work and life was set.

While Pratik wanted to pursue a medical career, his 12th standard rank didn’t help him get a seat. “And I was from a regular middle-class family. The idea of paying and getting a seat was out of the question,” says Pratik.

Chasing his passion for acting, Pratik came to Mumbai in 2004. While pursuing his acting career, he worked as an engineer, a performer at children’s parties, a cell phone tower repair person. The list is endless.

And while doing all of this he worked in movies like - Yours Emotionally, 68 Pages, Bey Yaar, and Gujarati plays like - Aa Paar Ke Pele Paar, Jujave Roop, Apurva Avsar, Amarlal, Saat Teeri Aakvees Part I and Part II, Chho Chhok Chovees, and many more.

It was in 2016 when he essayed the role of Raju Bambani in the National Award-winning film - Wrong Side Raju, that Pratik decided to shift into full-time acting. While the journey seems long and arduous, Pratik today shrugs it off. He just says -

“I don’t call it a struggle, but part of the process. It is the first step that just cannot be escaped. The struggle is the same in anybody’s life- an entrepreneur or an actor. In the initial years, all are trying to make room for themselves, looking for that recognition as that puts faith in your craft and your business. But it is a process. You need to reach a point to get overnight success”

Pratik has been focussed on one thing - his performance and craft. Everything is about that, the fame, the money, and everything else follows. It is about believing in the character and making it real. He adds, once as an actor you start doing that everything starts working.

“I still have the same zest to challenge myself and experiment,” adds Pratik. He has even been a part of Radio Naatak.

He says, “I love Radio Naatak as a form when we perform only reading sessions- you as an actor have to create the audiovisual feel in the audiences’ brain. Whatever you say the audience should be able to see it. If you remember your grandparent’s tale, the moment they start speaking, you can visualise it. It is the power of pure storytelling. There is no voice modulation, background music nothing.”

Though the journey and challenge of performance can keep you and in hindsight, the struggle may seem romantic, but living it can be impossible. There are times when you just want to give up. However, Pratik didn’t think so. He says,

“There is this beautiful thing in the industry and in any struggle in performing art - it is called Hope. Every day you sleep with that hope that something is going to happen one day. And that is what keeps you going.”

Pratik also believes this is the best time for actors to be around and be working, because of the OTT platforms. The audiences have matured, they are ready to look at different themes. The ‘story’ today is king. Everything is content-driven, and actors are here to add value to the story.

Advising all aspiring actors, and entrepreneurs,

“Have patience and don’t let your passion die. Just keep working in whatever capacity you can. It is the only thing in this field I have understood - survive and keep working without being negative or bitter. The moment you become negative; it will eat away a lot of your energy. And you can’t focus your energy on the right things. Change your focus away from bitterness. Focus on yourself and self-improvement because that is the only thing in your control. The other variables aren’t in your hands. Why think and talk about it and waste your energy?”