This production offers a one-on-one interactive theatre experience unlike any other - on the phone! 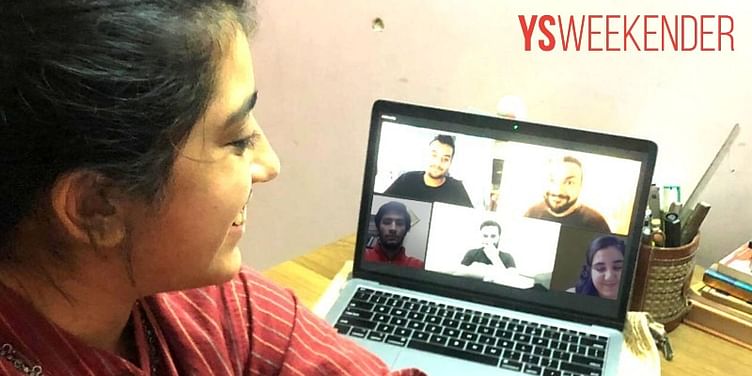 Lifeline 99 99, presented by Kaivalya Plays, is an interactive theatre production that the audience experiences through a telephone call. The play was not created as a response to the pandemic, but its consequences have inspired the content.

Creative minds are adept at finding innovative measures to make art - some through the use of futuristic technology, and some by relying on devices and practices of the past. The team behind live interactive show Lifeline 99 99, presented by Kaivalya Plays in partnership with Exotel, has done the latter.

London-based Gaurav Singh and Akshay Raheja from Delhi are the co-directors of this unique show. Together, they were planning to create a virtual reality-based interactive theatrical experience amalgamating video with live performance.

However, the pandemic upended their grand plan, paving the way for a telephonic performance instead.

“Just 10-15 years ago, everything happened through phone conversations. From romances to life-changing events - it was all discussed on the phone, but with newer technologies and social media, phone conversations have become mostly transactional in nature – only used for ordering groceries or attending service calls. In the last year, major screen fatigue had also set in, so we decided to explore the idea of a telephone conversation,” Gaurav says.

The first season of the show in February this year had a successful run, prompting a larger team to return for Season Two, which is on till August 29. In a candid chat with YS Weekender, the directors and performers shared their experiences and the challenges of working in a remotely assembled theatrical production.

For Lifeline 99 99, seven performers offer seven unique one-on-one interactive telephonic experiences, in the span of 35-60 minutes. The audience dials in and through a hotline format, chooses two preferred experiences. A shuffling of performers takes place back-end based on the choices picked, and then each one calls a member of the audience.

The experiences are semi-scripted, which the actors lead the audience members through. However, there is a high level of improvisation involved depending on audience reaction to the conversation.

“Theatre keeps the audience engaged much more than any other art form. We wanted to explore this relationship between the audience and the performer. Keeping it one on one helps us do that,” Akshay explains.

The seven experiences consist of the following simulated situations - a conflicted sex chat operator for the show titled ‘Intimacy can only come with a connection’, a SIM card agent who is also an aggrieved idealist for the ‘What if it’s your last conversation with someone on the phone?’, an alien described as a ‘dude’ for ‘What would happen if time stopped existing?’, a morbid insurance agent for ‘Ever wondered the cost of your life?’, a memory alteration researcher for ‘Do you think photos can trap memories?’, and an ethical scammer in ‘What comes first? Art or the artist?’.

Apart from their directorial roles, Akshay writes the scripts, and Gaurav performs. The other actors include Kaivalya regulars Raghav Sethi, Vanshika Verma, and Ramita Menon - currently based in Spain, as well as Nikie Bareja, Kumar Abhimanyu, and Rochan Mathur from Delhi’s popular improv theatre circuit.

Each one was included in the production based on their acting and improvisation skills.

Akshay says, “We didn’t have a script so there were no auditions. We wanted to make the scripts collaboratively with the performers, who could sketch out new narratives based on the situation. So, over the course of three months, it was an ongoing scripting process.”

With no financial sponsor on board, the show is completely self-funded and relies on ticket sales, priced at Rs 499, to cover costs. Additional funding and grants have been applied for, but none have been successful so far. Fortunately, for the second season, communications company Exotel offered their IVRS and voice calling platform to the team, which helped them navigate the logistical challenges of telephone networks.

The challenges of remote performances

Assembling an entire theatrical production remotely is bound to present many challenges in production and performance. These can be as simple as keeping devices charged and ready for recording, and locating an area in one’s home that is quiet and offers good network connectivity.

However, there are artistic challenges as well.

Kumar Abhimanyu says it can be tricky to find the balance on who is leading the conversation – the artist or the audience. Ramita and Rochan highlight the importance of making the audience connect with the artist and making them believe in the multiple characters a single artist may slip into, during the show.

Vanshika laments the rare moments when the audience logs off from the experience, having expected something else, which can be quite difficult for the performer.

Since the audience pays for tickets and is aware of the basic premise of the show, most are prepared to be led. However, in some cases, audience members become “too playful” in Rochan’s words. He once received a threat and accusation as part of his performance – delivered in jest – which could have thrown him off, but became instead an interesting opportunity for him to experiment.

The small-knit team is effusive in its praise for the project. By transcending physical boundaries and creating an entirely unique concept, Lifeline 99 99 is a one-of-a-kind show they are glad to be part of.

Raghav loves eliciting laughs from the audience while Vanshika appreciates connecting with strangers and inspiring them to open up about themselves.

Nikie says, “With each performance, I have realised something about myself – like a mini-epiphany, and that is so amazing.”

Over the last year, interesting conversations with strangers and acquaintances have become rare occurrences. Hence, this interactive show fits with mental health conversations taking place around the globe.

Akshay explains, “We’re not offering therapy, we just tell a story and hope it translates into a meaningful experience for the listener. Just yesterday, Abhimanyu was told that he was the most interesting person the attendee had spoken to in a year – and it felt so great to hear that as a team. Some episodes have more of a mental health aspect than others. For example, in one of them, we encourage the audience member to talk about their childhood memories and that becomes inadvertently therapeutic.”

He is quick to point out, however, that the play was not created as a response to the pandemic, though its consequences definitely inspired the content. “It made us rethink human connections in live conversations as opposed to telephonic ones,” he adds, believing and hoping the novelty of the idea will remain relevant even when performance venues open.

Though Season Three has not been announced as yet, the team wants to develop each of the seven experiences to become more interactive and immersive for a global audience. They hope to do this by collaborating with international cultural organisations or applying to select theatre festivals.

“Our goal is to mount one more international run of shows before this year ends, but we need to raise funding to cover the artistic fees involved,” Gaurav says.

Lifeline 99 99 makes use of a ‘distanced’ composition style, bringing art to audiences that appreciate being at the centre of the show, and the telephone requires less ‘technical’ understanding, offering scope to grow on a mass scale.

Telephonic performances are one of many ways in which the theatre is changing.

Rochan sums it up, “The pandemic has introduced us to an interesting hybrid - live theatre on a screen/device that encourages performers to explore their voice modulation, stage acting, and camera acting all at once. We have also learnt to play with technologies, filters, backdrops, lights, tilted screens for different angles, which have added interesting layers of possibility to all theatre performances going ahead.”

Tickets are available for the last set of Lifeline 99 99 shows this month, on Saturday, August 28, and Sunday, August 29. Check their website for more information.

Art for a cause: How transgender activist Kalki Subramaniam is challenging gender stereotypes