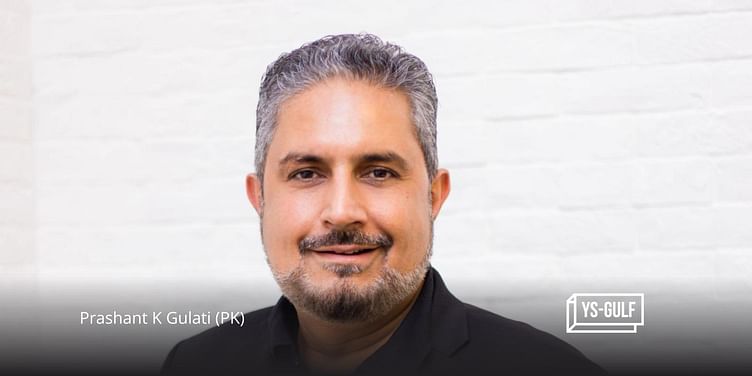 Prashant K Gulati has seen the Dubai startup ecosystem evolve to its present state. In this conversation, he deep dives into working on the Burj Al Arab hotel, building his first call centre in India, helping businesses in Dubai with TiE, and more.

The President Emeritus of TiE Dubai and a trustee on the global board of TiE, Prashant K Gulati, or as he would like to be called—PK, is a known figure in the UAE startup ecosystem. However, the angel investor's journey began with the Burj Al Arab—the iconic sail-shaped five-star hotel in Dubai.

In 1995-96, Dubai was emerging as an economic hub in the Middle East, and PK was part of the team that conceptualised and built the Burj Al Arab.

As a computer science graduate in his early years, Prashant moved to the US as he believed his future was in San Francisco. But he could not call Silicon Valley his home. He had to make a pit stop in Dubai.

“The only reason it [Dubai] became a stop was that it was closer to home [Delhi]. I wanted to stay close because of family issues. I thought it would be a short stint before I head back to the US again,” PK tells YourStory Gulf Edition.

Moving to Dubai was a smart move for him. In 1999, Burj Al Arab became the basis of the smart city movement—the first to have complete Wi-Fi coverage, video on demand, and automated security in the building—sourced from various parts of the world.

At the time, PK was working for PairGain Technologies, which brought broadband to the world. “We were way ahead of the world, and it didn’t make sense to go anywhere else,” he says.

Today, PK is a mentor and technology innovator. He is the founder of The Assembly and SmartStart Fund, a senior advisor to Dubai Future Foundation, and an active angel and early-stage investor in startups in the region.

PK says working on the Burj Al Arab created a cluster effort that brought in thought work and a design and infrastructure boom, which put his team on every major tech infrastructure project in Dubai, including the Dubai Internet City and Dubai Media City.

Simultaneously, India also saw its economy open up to the world, thanks to liberalisation.

At the time, the Karnataka telecom circle was handing out 50,000 new SIM cards every month, which meant Bengaluru city had a few 100 call centres. If multiplied on the national level, the number of call centres grew exponentially.

“And it still didn’t answer Indian calls. That’s when I started the first domestic call centre—CustomerFirst with 16 people—in 2001,” Prashant says. But he also believed it to be a 'dumb’ move, made without much thought.

Nonetheless, the bootstrapped company with no venture capital funding grew leaps and bounds from 16 people to 6,000 employees in three and a half years across six cities.

“The problem was we couldn’t put in infrastructure fast enough. A lot of the growth was during the first dot-com bust, where we could re-rent infrastructure,” he adds.

Soon after, the company was renamed Aegis and acquired by the Ruia Family.

“In retrospect, it became one of the largest outsourcing companies before it got broken up and sold to private equity. We didn’t even realise what we had built. We learnt how to scale and how work should and could have been. It showed us how to build large companies. We hadn’t done that before,” says Prashant.

Venturing the startup world with TiE

In a sense, Prashant was building startups and tech businesses before startups became mainstream. Settled in Dubai and frequently visiting India gave PK a vantage point to witness the Indian startup ecosystem evolve and grow.

“It gave me access to everybody that mattered in the region. I got involved with TiE in 2001. We officially launched the Dubai chapter a year later,” PK adds.

At the time, TECOM was chaired by the now Deputy Ruler and Minister of Finance of Dubai, Sheikh Maktoum Bin Mohammed bin Rashid Al Maktoum. It awarded the first license of the TiE Dubai chapter to Dubai Internet City.

Talking about encouraging businesses and startups, PK says, “In these things, there is always an iceberg effect, where people can see only 1/10th of the progress, and in Dubai, it is more. For the first few years, everybody worked to build without too much to show.”

Back then, people didn’t believe in Dubai Internet City, but now it houses all the big corporations, including Google and 500 other global companies. Today, it is one of the most successful technology clusters in the world.

When TiE was growing, it realised that everyone wanted a solution for a problem, which should not be restricted to Silicon Valley. And, TiE Dubai focused on supporting businesses.

“The reason Dubai has been able to succeed is that the distance between an issue and a regulation to be put to is pretty small compared to other countries,” PK says. For example, the crypto shift in the Dubai market is faster and better than in much of the world.

Moreover, a majority of Dubai-based startups were launched by expats who were working in companies. It was both hard and illegal for them to start a venture on the side.

The first step was to define what ‘entrepreneurship’ meant in Dubai, PK explains. Gautam Sengupta, who became the President of TiE, conducted a survey for the same.

“The typical Silicon Valley model of entrepreneurship was kids starting up in a garage because we used to joke all the time that Dubai has no garages. However, the law here was strong—if you did anything out of office became the property of your sponsor,” Prashant explains.

Another aspect was the high cost of starting up a business. The cost of failure, however, was also high as it would burn through the entrepreneurs’ savings.

The next step was to look at funding and subsidised costs for licensing and offices. For this, Dubai Internet City had to make a few changes, and things started changing 10 years back.

“We have built the ecosystem from the ground up with community effort. This community is now growing with meet-ups and push towards building companies and groups that are doing well,” PK says.

Today, Prashant says Dubai is sitting on an opportunity—the young populace of the region.

“Dubai is now the centre for a few 100 million people looking to build something. They are finding this opportunity in Dubai without any worries. It has an ecosystem boom. There are education systems in Egypt, Jordon, and North Africa, and now there is an avenue in Dubai, and with opportunity, distribution is opening,” he adds.

Further, the city has several ‘role model’ businesses like Careem, Souq, etc., and the startup ecosystem is now evolving and growing in the region.

“In 2023, I see a clean-up that separates the boys from the men, and money will be available for those doing a great job, which will automatically remove those who aren’t committed to solving a problem,” PK explains.

“Sometimes, money will be scarce, but it is available in the market as investors raise capital in this cycle. They are on the top of the cycle and are discerning. The new god in town is unit economics,” he believes.

PK says, in 2023, businesses will see higher automation of services. There is a push towards a massive digital dividend of essential work, such as payments. There will also be consolidations and mergers and acquisitions.

Advising entrepreneurs, Prashant says, “Look into the mirror and ensure you are ready for the drudge. The slowdown and winters are generally a wake-up call. Entrepreneurship is a many-year commitment; people don’t understand the amount of time it takes. Investors look at a 10-year cycle, but it has to be more than that for founders. It’s all about extreme commitment.”