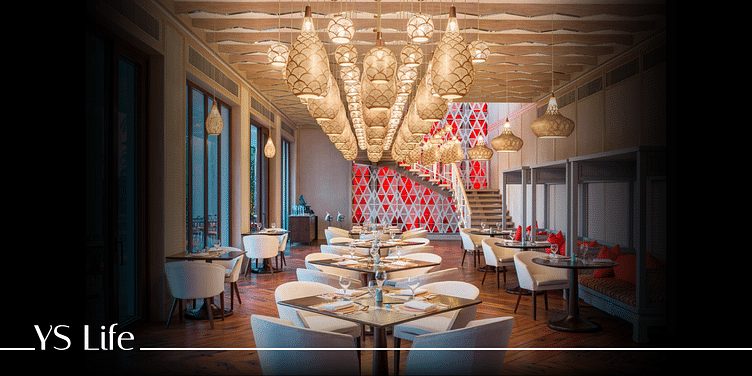 Every Sunday, W Goa’s restaurant, Spice Traders, brings the best of pan-Asian food under one roof.

What’s better than a Sunday brunch? A Sunday drunch!

A drunch, as the name suggests, is a brunch but with drinks. And nobody quite does it like W Goa. Every Sunday since 2020, the resort takes its guests through the bylanes of Asia with a scrumptious spread and cocktails at its Spice Traders restaurant.

A property of Marriott International, W Goa is unlike any of the other five-starrers in the country. Rather than keeping its decor traditional and ‘uptight’, W Hotels resort in Goa’s Vagator beach offers a modern take to luxury hospitality. And with its Sunday drunch, W Goa is setting the brunch-bar high too!

Overlooking the resort grounds, and the sea beyond that, Spice Traders was initially two-storeyed—offering an indoor dining room and a rooftop terrace dining experience to its guests. In an attempt to keep up with the rising gin culture in Goa, and the potential tequila revolution in the country, W Goa has converted the second floor of Spice Traders into Sylvia—the gin and tequila bar.

Designed as a luxury beach hut overlooking the spectacular sea, the restaurant is washed in the usual reds and whites, and the ceiling is adorned with lanterns—like in most pan-Asian restaurants.

Shaiban Hasan, Hotel Manager at W Goa, says that the ceiling is designed to depict waves and the chandeliers “add character to the design, representing stars across a dark night.” While the first floor is unabashedly flamboyant, Sylvia looks more polished.

Every Sunday, besides offering a vibrant and humongous spread, Spice Traders introduces guests to Goa’s local singers who perform live during brunch. A quieter lunch was all I wanted after a loud, late Saturday night, and the servers generously offered to serve me my meal on the first floor, at Sylvia. I was already impressed!

Sitting at the new gin and tequila bar, I couldn’t let the opportunity slip and grabbed a glass of my favourite spirit and enjoy the view outside. I ordered Dessert fashion off the menu—a gin cocktail with vermouth and clarified liquor, topped with an almond biscotti—a dessert in a glass!

Now coming to the food. The options are unlimited at the Sunday drunch. The upside? The portion size is small enough to allow guests to try everything off the menu.

The buffet starts with the usual clear noodle soup with the option to select from a range of vegetarian and non-vegetarian condiments. Excited about the fare that lay ahead, I decided to skip the soup.

Next came the sushi bar and the dim sum live counter, with two options in vegetarian and non-vegetarian each. An ardent believer in ‘no fish, no sushi’, I skipped the asparagus maki and the veg kake aage roll.

The non-vegetarian section had some similarities—a spicy option and a prawn version of both the sushi and the dim sum. The spicy tuna roll with crispy potato crunch was flavourful and a refreshing change to the usual tuna roll, however, the spicy chicken dumpling was not spicy enough for my taste.

Being a Bengali, and in Goa, I was biassed towards the prawn offerings—the sunlight maki roll with perfectly golden fried prawn tempura, and the prawn cilantro dumpling. The char sui chicken bao was also a hit—thick enough to make it out from a dumpling, and thin enough to not overpower the flavours of the stuffing.

The most interesting slice on the menu was the salad and pizza bar. It featured steamed spinach salad with peanut dijon dressing, spicy sour shredded potato salad, rice noodles with seafood salad, red and yellow pepper pizza, and tuna truffle pizza. My favourite was the crispy chicken salad with crunchy lettuce—I went for a second serving. The spinach salad lacked the pungent mustard flavour, and was rather bland.

The raw bar, with apple carpaccio, chilled tofu with spicy peanut dressing, tuna furikake ceviche, and salmon, tuna and edamame ceviche, seemed popular among the other guests, but I decided to skip to make space for the main course.

The live Tangra (East Kolkata area famous for its Indo-Chinese restaurants, also called the Chinatown) counter was my obvious first choice. I picked moon fan scallion fried rice with egg for mains, along with butter garlic chilli fish, Hong Kong style spicy chicken, and Sichuan chicken with Napa cabbage. On the sides, I got prawns with sweet chilli sauce from the live chinese grill counter.

My top pick from the main course would be the butter garlic chilli fish—for how crunchy it felt on the outside, and how soft and fresh it was from the inside.

The live roast counter featured a Beijing roast duck and Asian spice brined roast fish. But I decided to save that for my next visit to Spice Traders.

While much is to be said about the openers and the entree, the star of the afternoon was the jasmine tea eclair. I’m usually not a fan of eclairs for how sweet they usually are; the one served at the W Drunch walked on the thin line between too sweet and not sweet enough. I did not regret skipping the roast fish and having the appetite to go for an extra slice of jasmine tea eclair. The dessert menu also had a five-spice chocolate cake, and lemon tarts, along with a bunch of ice creams.

As a pan-Asian loyalist, both my heart and stomach were satisfied with the drunch at W (the latter, a little more). While the cost of the meal might initially seem to pinch the pocket, the scrumptious fare—with its robust and complex flavours—is definitely worth the hype.

YS Life suggests you try out the drunch during your next holiday in Goa, after a long night of partying your heart out. There’s no better cure for a hangover than a protein-packed meal!