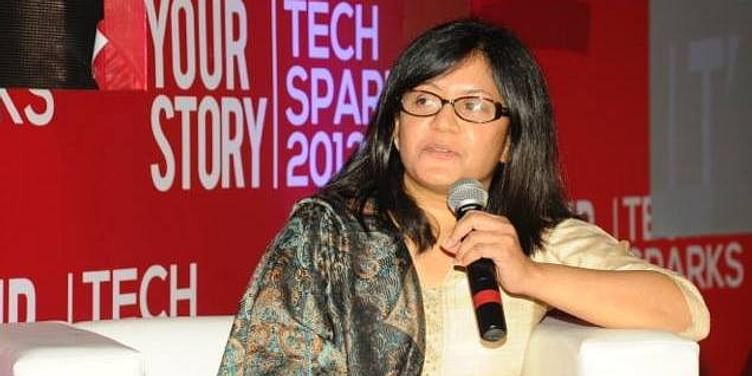 Mu Sigma is one of the biggest success stories coming out of India lately. A business analytics company based out of Bangalore, the company is valued at over a billion US dollars. One of the lesser known facts is that at the helm of the company is a husband-wife duo of Dhiraj Rajaram and Ambiga Dhiraj. At TechSparks 2013, the audience was witness to a candid conversation between Ambiga and Shailendra Singh, the MD at Sequoia Capital, India.

One of the questions posed to Ambiga from the audience was about the appraisal system at Mu Sigma which doesn't hinge on financial incentives. The recruits at Mu Sigma are offered a fixed 3-year package, and it doesn't depend on the appraisal meetings. The question was whether such a fixed package make an employee lazy. “This is great question but we've arrived at the system after some experiences we've had. What we noticed is that if the sole purpose of a meeting with the manager is financial incentive, the growth of the employee is not really discussed,” says Ambiga. A fixed package ensures that the monthly or quarterly meetings stress on the growth of the employee in terms of skillsets and other parameters which will help an employee to grow fast.Mu Sigma had initially started out by hiring experienced folks across the various teams but soon realized a few things that made them change their strategy. Mu Sigma then focused on hiring fresh engineering graduates and training them to execute and sell as well. There are a couple of things which have resulted in this culture at Mu Sigma:

The company has taken a different stance on many conventional practices, and they seem to be working for now. Not aping the west, Ambiga says that they have come upon practices from their experiences and this is how they intend to keep it. “The 22-year-olds of our company sitting out of the offices in Bangalore are our real fire power and we're proud of the fact,” says Ambiga. Mu Sigma is looked up with reverence by entrepreneurs across the country and Ambiga's views at TechSparks only strengthened this sentiment.