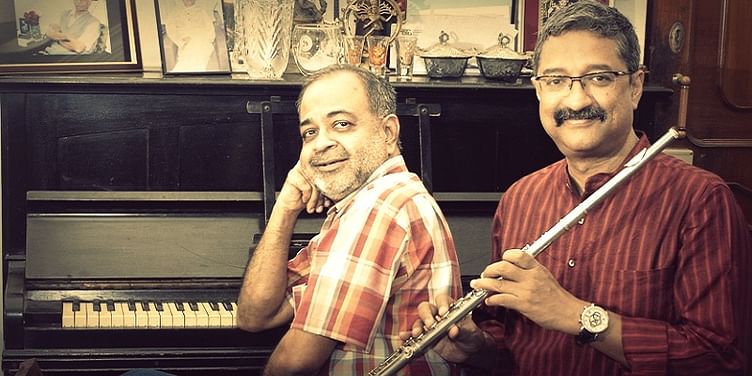 Ever heard of mogo? Well, if you met J Mani, co-founder of BrandMusiq, you would know what a mogo is. BrandMusiq is an advertising agency that creates sonic identities (as opposed to visual identities) for a brand. Mogo means ‘musical logos’ or sonic identities which will help the brand stand out sonically in the marketplace.

YourStory had a chance to meet the people behind BrandMusiq and talk about their new venture.

Founded in 2012 by J Mani and Rajeev Raja, BrandMusiq is the only Indian advertising agency and perhaps among the very few in the world which focuses on creating a sonic identity for a brand. Co-founders Mani and Rajeev go back a long way, when they started working together in Clarion advertising in 2005 and then in DDB from 2007-08.

Both Mani and Rajeev have over 20 years of experience in advertising, and perhaps Rajeev has equal years of experience in making music. He has done many gigs – with bands as well as solo. BrandMusiq is the coming together of the two interests in a new way. “Mostly sounds for brands have been in the form of TVCs or jingles. Signature music for brands is not very prevalent. We want to create music for brands from a creative point of view and not just the brand point of view,” says Mani.

BrandMusiq’s view of the world

The agency thinks of brands as human beings, who have a value system and therefore also a voice of their own, and through BrandMusiq they want to create a sound for the brand across board. Mani chooses Titan to explain the analogy further. “In the late 80s, Titan was only a visual catalogue. Music was used to connect all pictures of Titan watches together. The music that was chosen for the brand was a Mozart piece which was repeated consistently over and over again till it came to be recognised as the voice of the brand,” he says. However outside of TV or radio, this music was not present – even Titan retail stores never play the sound. “A blind person cannot recognize the brand, outside TV,” explains Mani.

Other well-known jingles created for brands like Lifebuoy, Hamam or Liril are all over 50 years old, but none of them have a standing outside the television screen. BrandMusiq intends to change all that. “One of the most popular sonic identity ever created is the sound of Om, which we associate with God. God may have different visual identity, but he sounds the same sonically,” elaborates Mani. Therefore creating a sonic identity that can transcend physical boundaries and cut across media – TV, online, retail – is the ambition.

How they plan to achieve it?

One of the first things the BrandMusiq team is doing is talking to the owners of the brand, and not the marketing heads. “We believe the brand owner understands the holistic experience of the brand which is not limited to only the product,” reasons Mani.

They are a two-member team and Mani says they plan to stay that way forever. Collaborations and partnerships will be done with external parties as required, but they do not have any immediate plans to increase their team members. However, they do plan to create a Sound Lab, which will be an open lab for people who want to make music. People can come and utilise the facility, experiment with sounds and generally have a good time.

One of the first brands that BrandMusiq is working with is Club Mahindra. They are creating a sonic identity that will be used across lobbies, rooms and restaurants. “After discussions with the brand owner, the attributes we have drawn up for Club Mahindra are -- friendly, family oriented and about reunions. Now we are using these attributes to make sound,” says Mani.

Also breaking away from the traditional practice of getting paid after the work is done, BrandMusiq has put down the condition of being paid up front. They also own the IP for the sonic identity, until the entire payment for the work has been done, says Mani. The duo is in no-rush and is confident of making brands see their point of view, sooner than later. “We want to treat each brand differently. We don’t want to take on too much, because the work we do is a hugely iterative process and unlike normal creatives which can be delivered overnight or in a week, sonic identity creation takes up to 12 weeks for delivery,” explains Mani.

With one brand nearing completion, Mani says they are in discussion with a media entity, an airline and a cafe brand to create sonic identities for them.

The idea of BrandMusiq is powerful, what remains to be seen is how customers adopt the idea. In a market where brands are talking about breaking clutter and engaging better with customers, can sonic identities act as the differentiator? Only time will tell.