GSF alumnus Gingr lets you chat with restaurants, now expands to include salons 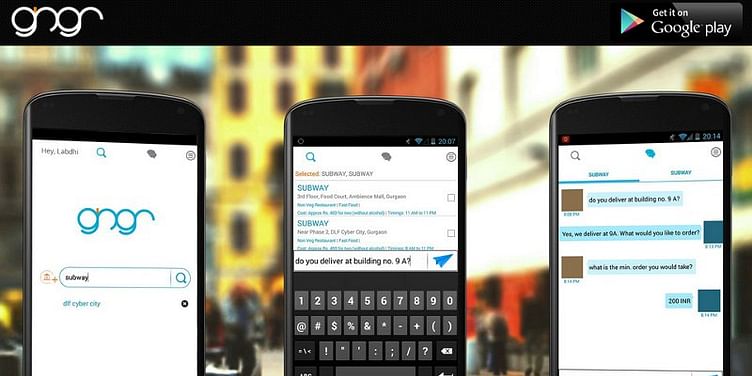 At his age, Himanshu Bamoria has seen a lot in the startup world-- co-founder splits, accelerator stint, a complete pivot, acquisition offers, raising a funding round-- and all this within three years. Himanshu is an IIT Delhi graduate, who launched his startup in his third year along with two batchmates.

In late 2011, the trio began with Boozepanda.com, a nightlife discovery portal which suggested best places across a city (Delhi when they began) for a group hangout. Post this they were looking for some funding to scale but instead got a merger offer from a bigger player but decided to let it pass. While still in college, Himanshu and his team made it to the first batch of GSF accelerator where their idea underwent some modification.

Post the GSF stint, Boozepanda pivoted to Gingr and was now a messaging platform for people to connect with businesses-- restaurants, bars and pubs to begin with. They did a closed beta with about 3000 users in Delhi and the results were satisfactory but there was funds crunch which led to the other two members leaving. This called for a restructure and that is when two seniors from college, who had previous startup experience, stepped in to salvage the situation. Gingr went on to raise a round of investment from investors based in London and Dubai and was seeing success.

Gingr now has more than 10,000 businesses in and around Delhi NCR on their Android application. Gingr has a call centre layer in between as well where users can call and inquire. Getit Infomedia is the data partner for Gingr which enabled them to get the businesses on board their chat platform. Recently, Gingr expanded to ‘Beauty and Wellness’ segment which means that a user can now message around 2700 spas/salons/beauty parlours.

The application has around 8,000 downloads and the plan is to now expand to other locations in India. Messaging has seen a huge rise recently across the globe and the popularity of Whatsapp has opened up a whole new horizon. Haptik is another player founded by ex-Flurry India Director Aakrit Vaish which is a messaging platform for users to connect with brands. The asynchronous nature of messaging makes it comfortable for the users and especially in cases when you're dealing with businesses and don't want to spend a lot of time waiting in queues on phone calls.