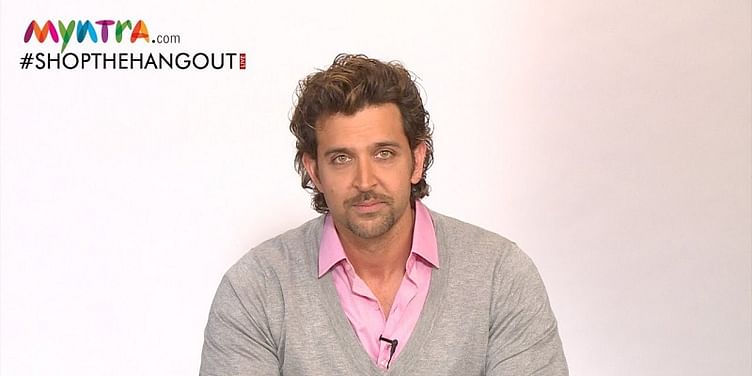 Myntra, one of the biggest e-commerce websites in India, hosted Asia’s first Shoppable Hangout today along with Google Plus and Hrithik Roshan, who was promoting his brand HRX. Hrithik Roshan has launched his active lifestyle apparel and casual wear brand, HRX, in an exclusive partnership with Myntra.

Myntra was last in news when they were shipping the orders in less than an hour in the select areas of Bangalore and Delhi. The portal’s co-founder Ashutosh Lawania reportedly said that they plan to double the turnover from Rs 400 crore to Rs 800 crore by investing in brand promotion and penetration in smaller cities.

Google is known to be an active player in the e-commerce industry too with its much-hyphed Great Online Shopping Festival (GOSF). Despite the initial technical hiccups, it reported a huge success with over a million users visiting the site during the first 24 hours.

Google Shopping is an e-commerce website where people can buy things using Google Wallet. It is present in 19 countries and we hope it will be launched in India soon.  Though the hangout was late by 39 minutes it was attended by 2500+ people, but only the sales at Myntra and the sale of HRX clothing range will be a demonstration of how successful this event was.

The few people who were initially on the hangout were bloggers, journalists and two winners from Myntra. The hangout operates by adding a few chosen users but it is yet to be ascertained how many users will finally get to be part of Asia’s first Shoppable Hangout. The whole event was screened live on Youtube. To a question by an NDTV Journalist on what is in store for Myntra in the next 10 years, Myntra’s Gautam Kotamraju gave an analogy of steering a car with headlights on. “We are on the right path, once the path finishes we will think about it then,” he said.

The hangout saw models showcasing the outfits from trendy to comfort fit. There were discussions on brand HRX’s philosophy and future trends. Hrithik Rohan said that they were building the essence of HRX and that will take some time.

At present, HRX designs and manufactures only men’s clothing. Hrithik said that though women’s wear was his first choice, but Myntra’s Gautam told him it was a tough market to crack, nonetheless it is in the pipeline.

Hrithik’s last words to entrepreneurs was a call to them to move ahead despite failures, and to never ask, ‘Why me?’ because that is the true spirit of an entrepreneur.