Zoomcar wants your help to ‘pimp’ out the Ambassador Classic 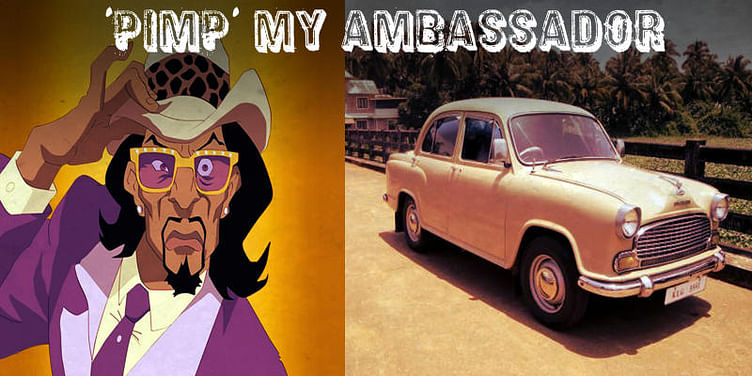 The Hindustan Motors Ambassador Classic is a truly Indian product. The iconic white four-door saloon is the definitive Indian car. Often referred to as the ‘King of Indian Roads’, the HM Ambassador has been the favorite mode of transport for the babus and politicians of the country for almost as long as the existence of babudom and post-independence politics itself.

Fondly called ‘The Amby’, it is a familiar sight on Kolkata streets in its black and yellow taxi avatar. It was voted as the best taxi in the world by British television show ‘Top Gear’ where it beat rivals from Britain, America, Germany, South Africa, Mexico and Russia. The car which holds the record for the most number of years in mass production does not have power steering, cruise control or power windows like the modern four-wheels. What it lacks in jazz it more than makes up for by being virtually indestructible.

But now two college friends Greg Moran and David Back, want to make the car SEXY! Think green paint, leopard print seats, fuzzy dice on the mirror, smokin' awesome rims, and flux capacitors. And this is just the beginning. If the crowdfunding campaign that the founders of Zoomcar are running on Indiegogo exceeds its goal, the car will be ‘pimped’ up with pink neon lights in the undercarriage, a massive speaker system in the trunk and a super-charger sticking out of the bonnet.

Zoomcar is India's first self-drive car rental company. It is an idea that derives from the concept of sharing economy. Zoom was born three years ago when David talked about his passion for collaborative consumption to Greg and suggested that they explore opportunities to take the Zipcar business model to a developing economy. Greg was working on renewable energy development in India and immediately jumped at the idea. After over one year of planning, both dropped out of MBA programs, giving up full scholarships -- Greg at USC in LA and David at Cambridge in the UK.

Since the launch a year ago with just seven cars, Zoomcar has expanded its fleet to 125+ at 17 locations around Bangalore. One can use the portal to hire a car by the hour, day, week, or month. The pricing is very transparent and the rental prices include taxes, fuel, insurance, and in-car technology.

“We have made what I think is a very funny Indiegogo project to "pimp out" a classic Ambassador. If you watch the first 10 seconds of the video, I think you will get a big laugh,” David teases us to watch the video.

“Obviously, the point of this for us isn't to actually raise money through donations. We just wanted to use this medium to have fun, get our members and well-wishers engaged, and spread the word,” says Greg.

“We'd actually much rather get a share on Facebook or twitter than a $1 contribution! No matter what, I think the Zoom Ambassador will be a lot of fun at events, cruising around Bangalore,” he adds.

“However, even a $1 donation does help us because the more individual contributors you have, the more likely you are to get featured on Indiegogo's homepage and get more attention,” David explains.

For people in Bangalore, some pretty steep discounts apart, there are several other perks on offer as reward on Zoom reservations. The discounts range from 15 percent to 40 percent depending on the vehicle type.

Zoomcar’s fleet consists of over 10 types of vehicles, including Figo, Scorpio, Vento, EcoSport and BMW. The company is part of the current batch of the Microsoft Ventures accelerator. “The program has been of great help, especially on the technology frontier,” says David. Zoomcar recently became the first car rental company in India to offer a plugin electric vehicle – Mahindra Reva.

The social and environmental aspect of car-sharing is what Zoomcar wants to highlight. “As you know, it is much more eco-friendly to own a two-wheeler and only take a car when you need one. That's also within this budget of a lot more people,” explains Greg. Zoom's goal is to democratize car use far down the income ladder while simultaneously taking cars off the road and giving people a direct cost incentive to drive less and drive smarter.

The crowdfunding campaign and the ‘pimped’ out car is a step by Zoomcar in the same direction. They want it to become the great brand ambassador (pun intended) for that message. Since its launch on April 01, the campaign is already set to reach its goal. $766 of the $1000 goal has been raised (as of writing this article), and more importantly over 1,000 people have posted about the campaign on their facebook walls.

The super-stretch goal of the campaign is to raise INR 1,000,000. “If we reach that goal, we have some other fun rewards, such as having Greg and I show up at your birthday/bachelors/bachelorette party in the Zoom Ambassador, being the first person to take a ride in the Ambassador (hopefully driven by an actual ambassador to India), and appearing in the Zoom Pimp Ambassador music video. Overall, it should be a lot of fun!” says David.

The team also has plans for the upcoming Election Day in Bangalore on April 17. It is offering a two-hour ride free of cost for people who want to take their vehicle to go vote. “We want to make it easier for people to go and vote. We want to encourage them to take their friends, family, and relatives along as well,” explains David. The user has to book a car for April 17 for a two-hour period and use the promo code: ‘DEMOCRACY’ at checkout. The payment has to be made and it’ll be refunded to the user when he’ll show his inked finger as proof of vote.

Uber, another car rental company, does several campaigns of the sort itself. In fact, Uber and Zoomcar came together for a very well-executed campaign recently called #RideSmartBLR. Involving the customer and having fun are essential parts of a marketing campaign for most companies in the West and the trend seems to be catching up in India too. For now the excitement is seeing a ‘pimped’ out HM Ambassador Classic on Bangalore streets.

What do you think about campaigns like these? Are Indian startups finally catching up with the new world marketing concept? Which recent marketing campaign do you like? Let us know in the comments.

Delhi voted in style thanks to free luxury ride with Uber