Music for elephants: How Paul Barton is apologizing to blind elephants for crimes of humanity 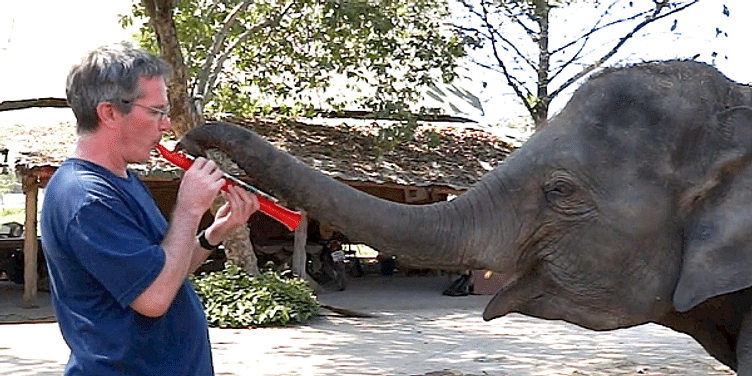 Thai teak wood is considered to be the finest in the world, a fact that has served to reduce the country’s forest cover from 61 per cent to 34 per cent in the twentieth century. From 1975 to 1986 Thailand lost 28 per cent of its remaining forests. Faced with these alarming figures, the government finally came around to enacting a ban on commercial timber logging in 1989.

The worst victims of this forestland massacre were those gentle beings whose home that forest was. Stripped of their freedom, these elephants were made to carry heavy logs of wood through the jungles and abused and mistreated to no end. The twigs and branches would scratch their eyes and draw blood from all over their body.

When the ban on deforestation was enacted, these elephants were rendered ‘unemployed’, mostly blind because of the injuries they suffered during the course of their ‘employment’ and with no training on how to survive on their own.

Elephant’s World, a haven of sanctuary, was set up on the banks of the river Kwai to give these elephants a peaceful home. It runs entirely on donations. Paul Barton, a celebrated British pianist, came to Thailand in 1996 in search for adventure. Instead he found love and a quest for life. He and his wife have been working to rehabilitate these elephants for the past two decades. Recently on the occasion of his fiftieth birthday Barton decided to fulfil a long cherished dream of playing music to the blind elephants. He did this by dragging his piano all the way up the mountain where the elephants usually gathered. Though the main purpose of this feat was fundraising, his personal motive for doing it is as enriching as it is inspiring. In conversation:

How did you get started with music?

I am a professional artist. I taught myself to play the piano when I was twelve. My father and I played music in a small seaside town in the north of England. I've been playing all my life.

I also love drawing. My father was an artist too and he taught me how to draw and paint. I went to the Royal Academy of Arts in London when I was sixteen to study that further.

Why did you move to Thailand? How did you become involved with animal conservation?

I came to Thailand in 1996 to teach at the Thai Piano School. I thought it would be an interesting opportunity to spend three months in Asia, a place I had always been curious about. But I met my (then) future wife here and stayed on. We have been married now for eighteen years. She has always been interested in animal conservation and activism and my influence stemmed from there.

Where did the idea of playing music to blind elephants come about?

In Thailand deforestation was made illegal sometime back, thankfully. But with that the elephants that used to work in the forests became unemployed, along with their mahouts. This became a big problem. Some new elephant sanctuaries were formed, including the Elephant's World in Kanchanaburi, Thailand. They look after old, injured handicapped street elephants who have nowhere else to go. They give them sanctuary by the banks of the river Kwai so they never have to work again.

One elephant Plara was blinded while working in the forest by the twigs and branches that constantly scratched her eyes as she moved. They destroyed her forest, her home and then cast her aside when she was no longer of use. I had previously worked with blind children for two years and seen the impact music had in their lives. So I wanted to try out that theory with these blind elephants. This elephant in particular was so intelligent, I thought it would appreciate some music. I thought hard about what kind of music it would like to hear and finally settled on Beethoven. Her reaction was so surprising. That was the beginning of this project.

What was her reaction?

Elephants eat a lot of food. A lot. It is exhausting trying to procure that much food for so many elephants. When an elephant gets to eat, it’s a bit like a dog. A dog will eat its food so quickly because it’s not sure if it will ever eat again. And elephants are the same. Once they get their hands on some juicy leaves, they will eat and eat and nothing can tear them away from their food.

That morning I brought the piano in early to the sanctuary. Plara was taken to a field full of juicy bamboo shoots and she began eating with a single minded dedication. I started to play Beethoven and she stopped eating. There was this half eaten bamboo shoot sticking out of her trunk while she stared at me. That was a reaction never seen before. An elephant stopped eating because of music.

You've been playing to these elephants for years now. What is the most striking resemblance between a human audience and a quadruped one?

All animals like music. Dogs, cats, etc. But elephants are the closest to human beings in the sense that they have the same neurons in the brains as us. Also they have a very good memory. If you are treated badly as a child, you are going to remember that all your life. It’s the same with elephants. The elephant shares that part of the brain with us which has flashbacks. They can never forget the terrible things they have seen and suffered.

If you play classical music to an elephant, something soft and beautiful, something that human beings have been listening to for hundreds for hundreds of years, something that is timeless- and you play that to an elephant that is blind and they've never heard music before- the reaction is priceless. There is a special bond between you and the elephant. You are communicating with them in a different language. That language is neither our nor theirs. There is something infinitesimally wonderful in a piece of Beethoven that connects me to that elephant and that feeling is otherworldly.

You insisted on moving the piano all the way up the mountain yourself. You are fifty and you said you suffer from back problems. What was the intention behind this difficult undertaking?

The elephant has worked for humans for too long. It was used in wars, it was used to deforest its own home. What is the little thing I can do as a human to say sorry, for my species for what we have done to them? I'll carry this heavy thing myself and play some music for the elephant while it is having some breakfast.