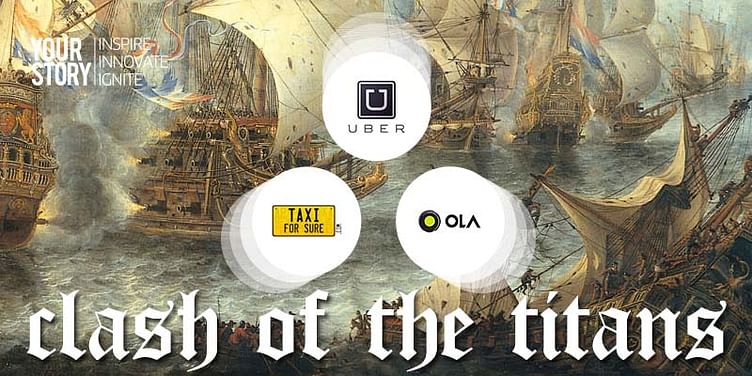 Uber raised a whopping $1.2 billion at an astonishing $18bn valuation, which makes it not just one of the fastest-growing but also the largest start-up in the mobile era. Its recently released API clearly shows that they do not see themselves as just a cab company but as an urban transportation phenomenon -- be it transporting people or goods. Uber launched its service in India in the second half of last year and has gained considerable ground. It has positioned itself as a premium service and now has its own fan following in India.

Uber’s entry in India has changed the game of the taxi business. The race is no longer about who is getting most customers, but about who is getting more customers on mobile. According to some insider information, the cost of booking a cab via mobile app costs less than 6% of what it would via a call centre. In this article, we are going to exclusively focus on mobile strategy and a look at their efforts in the past 12 months.

Ola launched its iOS and Android apps in 2012, Taxiforsure in 2013 and Uber launched its luxury Uber Black service also in 2013 and started its more economical option of Uber X only a couple of months ago.

Ola is the clear leader in app store rankings, coming at No.1 in transportation category. It has not always been the leader in the category. They started at 20th in the transport category and climbed to top positions for a brief while but settled down at the range of 10-15 for most of last year. In February, it finally broke the barrier and entered the top 10. It has since consistently climbed the ladder and consolidated its position only last month. But there has been a steep rise in its position in the category somewhere from the July 20th. Look at the chart below.

Ola's push in mobile is even more evident when you look at their rankings in overall applications category. While they were nowhere in the charts even till late July, they climbed to 118 in just a month! The steepness of the curve is indicative of Ola's focus on mobile. No points for guessing where a major chunk of their latest mega round of close to $40 million is going!

Let's take a look at the second player in the category, Taxiforsure. They were a little late as their app launched only in November 2013, but caught up with Ola pretty quickly. They started at rank 29 in November and moved pretty quickly into the top 20 in mid-December. There have been plenty of fluctuations in their rankings, and they breached the top 10 barrier for a brief while in December but pretty soon fell back to below 10 positions. However, they breached the top 10 mark in January, a month before Ola and have stayed there ever since, barring a 15-day period in April. It seems Taxiforsure had an early lead on Ola to grab the mobile market. For a brief period from July 21 to August 11 they held the top position. Even now, Taxiforsure has a ranking of third in the category and second among all the cab aggregators, although it has fallen behind Ola in rankings.

Taxiforsure's rankings in the overall applications category gives a better picture of their mobile push. For a major part they appear nowhere in the chart but entered the top 500 in July this year and climb to a formidable position of 212 by August 7. It has dropped a little since then and currently are hovering near the 300 mark in app stores. There are a few reasons behind this movement that I speculate. Ola seems to have given a massive push to acquire users on app store with its fresh funding to regain their early mover advantage over Taxiforsure and Uber. The competition from Ola must have changed the strategy and resource allocation of Taxiforsure and they seem to be playing the catch-up game. Secondly, Ola operates in 11 cities that include large cities like Chandigarh, Lucknow, Jaipur among others. On the other hand TaxiforSure operates in 9 cities and that does not include large ones like the ones I mentioned earlier. These two factors give some advantage to Ola but TaxiforSure is close behind.

Now, let's take a look at Uber, which had a better start than both Ola and Taxiforsure to say the least. After their launch in India they pretty quickly moved into the top 10 in early December itself and have stayed there ever since. Despite a really great start, Uber hasn't been at the top any longer than the competitors. If store charts are to be believed, both Ola and Taxiforsure are doing much better than Uber consistently. Uber has stayed at the top position only for a week in from Jun 14th to Jun 20th, right before the launch of Uber X! This might be as a result of the impending launch where they must have pushed their app but I can be completely wrong on this hypothesis.

Even in overall app rankings Uber has been a laggard with rankings hovering near 400 mark. It might be because they are not targeting the affordable taxi market like Ola and Taxiforsure but rather operate in a premium and semi-premium segment. This might change with launch of Uber Mini but until that happens, they are a premium service for a select few.

Also, take a look at this [Infographic] Clash of the Titans: Ola vs TaxiForSure vs UBER. Let us know what you guys think about taxi wars in India in the comments below.

This article was originally published on Betaglide's blog.