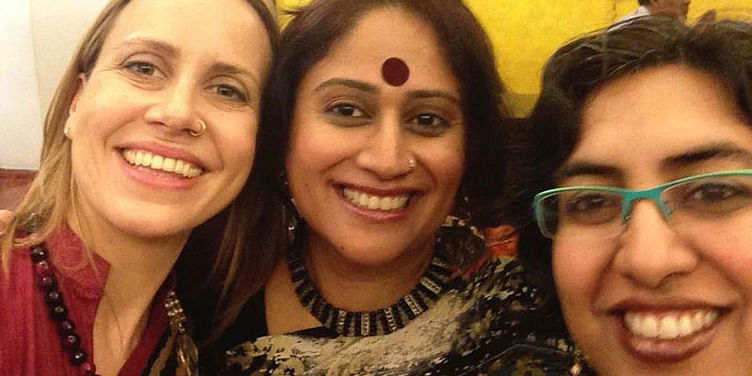 For poems are like rainbows; they escape you quickly.

We are surrounded by poetry – in the intonation and rhythm of daily grind – but we fear it; are intimidated by it even. Yet we take refuge in poetry to articulate the abstract or just to pause and reflect, to find meaning and purpose. But if you are not paying attention, it does escape you quickly, for ‘poems are like rainbows’.

In their own ways, Minal Hajratwala, Shikha Malaviya and Ellen Kombiyil have been filling their jars of happiness with this rainbow, until they decided to share their love of poetry through The (Great) Indian Poetry Collective. It is the coming together of poets who believe words can transform lives.

Founded in 2013, in Bangalore, India, as a not for profit poetry collective, The (Great) Indian Poetry Collective strives to publish poetic voices from India that are innovative and diverse. Says poet, author and writing coach, Minal, “Through a shared process of editing, layout & design and publishing, members of the collective will support one another in producing beautiful poetry books, chapbooks, and anthologies.” It believes each poem initiates a dialogue with society and the greater world. “Through poetry readings, workshops, and lecture/demonstrations, we want to build a community in which artistic expression leads to positive action.”

Calling it ‘poetry with a purpose’, the co-founders also aim to archive works by Indian poets writing in English lost to the present day reader through The (Great) Indian Poetry Project (an archive of modern Indian poetry under development).

According to the Collective,

As poets with roots both in India and the United States, Minal, Shikha and Ellen have turned into social entrepreneurs and are dedicated to making this vision a reality.

Two Stanford Ignite classmates, Deepthy Menon (Founder of One3One4), and Abhisarika Das (Director of KLoc Technologies), are working together on an app by the Collective called, inPoetry, which is in beta mode at present. It will bring contemporary Indian poets directly to smartphone readers everywhere. The vision of One3One4 is to create ‘magic in mobility’ by creating innovative mobile apps in the creative field. This is the company's third app, following forays into gaming and fashion.

Stanford Ignite is a 'boot camp' for entrepreneurs held in Bangalore for the past two years. Minal serves on the 'pitch panels' where the Ignite student teams practice pitching their startup ideas to venture capitalists and funders. She gives feedback and helps the teams to refine their stories. Deepthy and Abhisarika met Minal at a Stanford Ignite event. By coincidence, Minal and Abhisarika realised that they live in the same housing community in Whitefield! “Our meetings to develop and refine the app have been taking place at home over friendly cups of filter coffee and biscuits,” says Deepthy, adding, “The initial version of the app is for Android as that is the most widely used in India, and right now we are collecting names of Android mobile device owners who would like to be beta users of inPoetry and receive one poem per week from an Indian poet -- a free service to all involved. The purpose is to get the word out about modern Indian poetry. Poems featured on the app will be short, and easy to read in the mobile format — perfect to read while waiting for a bus or standing in a queue.”

“In today’s tech savvy world, where many of us are tweeting, updating statuses, and texting, communication has become brief yet powerful. It’s now all about the economy of words. People in advertising know this well and their slogans are written with the greatest of care. These slogans catch on like wild fire. We all recognize that words are an ambassador, a very powerful one. In fact, I even see poetry in some of these slogans.

“Compared to a story, an essay or a news article, poetry in most cases has that economy of words. In a few short stanzas, it can tell a story, it can convey a message, and it can bring a slice of the world to you. It can reveal a truth. The best is that it only takes a few minutes of your time to read.”

She feels there are misconceptions about poetry as a genre, being too esoteric, complicated and beyond one's comprehension, which prevent people from embracing it fully. “In this digital day and age, there are so many ways to share one's work and there are publishing houses in India that are focussed exclusively on poetry, such as Poetrywala. Slam poetry has also caught fire around the world, along with literary festivals and social movements such as 100,000 Poets for Change that reaffirm the power and relevance of poetry today. And let us not forget that many of our epics and classics were written in verse. It's an ancient legacy that has stayed with us and will continue to,” she adds.

The Collective has set the ball rolling with two published books, ‘Geography of Tongues’ by Shikha, launched last year in December, and ‘Bountiful Instructions for Enlightenment’ by Minal, launched this November. Their crowdfunding campaign will enable them to turn their popular live workshops into dynamic virtual workshops — using poetry from India to inspire creative work worldwide. Another purpose of the campaign is to develop the ioS app as well.

The Collective’s third book called, ‘Histories of the Future Perfect’ will be by Ellen and will be out next year. Says Ellen about her collection, “Some of the poems that deal with memory I compacted and pared down with the aim of making them neutron star heavy, a density of feeling, emotion and movement. It’s an experiment that I’m excited about.”

A unicorn of many colors, but a poet at heart, Minal enjoyed writing and reading ever since she learned the alphabet! “I was six years old when I wrote my first ‘book’: a few folded pieces of colored paper stapled together and dedicated to my parents. It was filled with little rhyming poems about birds. The one I was most proud of went like this:

I wish that I

could touch the sky.

I think most children are quite creative and are drawn to making art and stories and other sorts of messes... in my case, I never stopped,” she says with a smile.

Born and brought up in the US, Minal moved to India around 2010. She is the author of the award-winning epic ‘Leaving India: My Family’s Journey from Five Villages to Five Continents’ (2009), which was called “incomparable” by Alice Walker and “searingly honest” by the ‘Washington Post’. She is also the editor of ‘Out! Stories from the New Queer India’ (2013). She graduated from Stanford University, was a fellow at Columbia University, and was a 2011 Fulbright-Nehru Senior Scholar.

For Shikha too, who was raised in the UK, US and moved to India in 2008, poetry has been the literary love of her life since she was a child. “I never thought of poetry in English as being American or British or Indian. But the more I read and studied poetry, especially Indian poetry in English, I realized that there was an English vernacular of our own, informed by our personal histories, cultures and geographies. For quite a few years, I struggled with my own work and the purpose of being a poet as well. Why should my words matter? How could I make the personal more universal? At the same time, I was having trouble finding books published by Indian poets in English. Most had gone out of print. It was difficult to find any scholarly or critical work about modern Indian poets.”

Shikha says all this was stewing in her mind, when in July 2012, she came across a newspaper article on poetry. “I nearly leapt out of my seat when I read the first lines: ‘What happens to my drafts, my manuscripts, after my death? asks poet Arvind Krishna Mehrotra. They will be kept in boxes and sold by the kilo to the raddiwallah (scrap dealer) is what.’”

She says his quote hit her like a slap. The article talked about the need to properly archive Indian poetry, that there were manuscripts that had fallen to the side, that there were books that had gone out of print, books as recent as five-10 years ago. “It all came together for me in a flash. Here was something I could do that was beyond the scope of my own work and that honored the legacy of modern Indian poetry. And that’s what inspired the creation of The (Great) Indian Poetry Project and The (Great) Indian Poetry Collective.”

For Ellen, an American living in India, writing was always her first love. “I wrote my first poem when I was eight years old. It was called ‘Mr. Moon, Mr. Moon’, and was loosely based on my reaction to reading the story of Persephone. We had a gorgeous picture book retelling the tale, and I remember clearly the image of Demeter, searching for her lost Persephone, finally pleading for the moon to help her, as he must have seen everything. I felt that the moon could tell me anything, and the poem was a series of child’s questions for the moon and the moon’s imagined answers. I carried that poem, folded in the pocket of my jean jacket until the ink smeared and the paper wore thin. I recall that the poem arose quite suddenly in my mind as I was walking home from school, seeming to take shape from the texture of my thoughts mixed with the rhythm of my body.”

With her background as both a poet and a yoga teacher, there has always been a connection for her between writing and breath, and, separately breath and movement.

“Lately, I've been experimenting with the idea of movement and writing. What would it mean, for example, if the movement itself could speak? What would it say? I move and breathe and write. The poems are what I gather on the other side of the sieve.”

Ellen is a graduate of the University of Chicago where she studied astrophysics for one year as part of her graduation requirements. “My obsession with quantum poetry really began there in the space of unknowing. Each question that gets answers seems to open the door to five more questions. It’s a pattern I recognized again when reading Patanjali’s ‘Yoga Sutras’. These sutras are quantum physics, but experienced thousands of years before. I write from this place of mystery,” she says about her writing process.

For the three co-founders, the past couple of months have been more about dealing with the business of getting the Collective up and running. According to Minal, there are new learnings every day as entrepreneurs. With only four days to go for their campaign to close, like poetry perhaps, business too cannot wait! Show them some love here.

“Ink runs from the corners of my mouth. There is no happiness like mine. I have been eating poetry.” This line from Mark Strand on Shikha’s website aptly sums up the ‘fullness’ that the three women are experiencing.