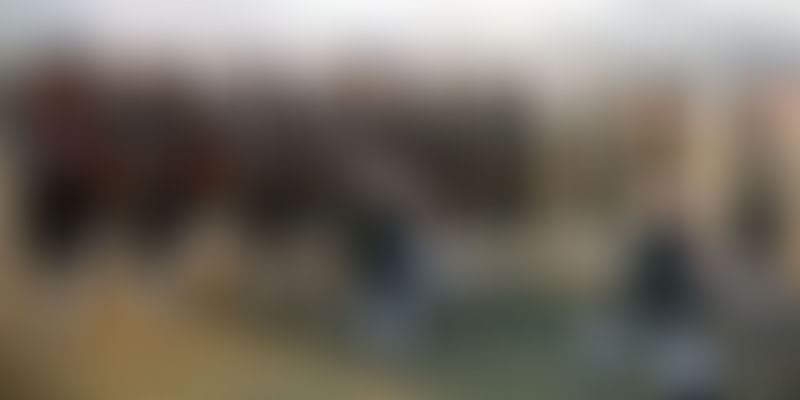 When she was young, the charm of putting on a uniform, of being a class-one gazetted officer, of getting commissioned by the President of India was enough motivation for her to think about joining the Army. After completing her MSc in Microbiology, she applied to an advertisement for the induction of lady officers into the Army, and was accepted into the first ever batch of women cadets in the Indian Army in 1992. She served with the Indian Army for 10 years.

We at HerStory caught up with Anjana Bhaduria, gold medalist in the first batch of women cadets (WSES – 1) into the Army, effectively making her service number 00001, to find out how it was to be part of this historic event.

HS: What made you join the Army?AB: My father was in the Air Force, so I had grown up with great respect for the armed forces and for the cause of serving the nation. I had completed my MSc in Microbiology and was working for a pharmaceutical firm in Chandigarh when I saw an advertisement regarding the induction of the lady officers into the Armed Forces. I was always excited with the charm of the uniform and of being an officer. I just tried for the Army and I got through, and since they wanted an MSc in Microbiology, it opened my field up much more. Unfortunately, my father had passed away a couple of years before this opportunity had come through.

HS: How did your family react to your decision to join the Army?

AB: My father was the type of person who would encourage girls to join anything. When he passed away a lot of the responsibilities of the family came upon my eldest brother. When I got the call from the Army, after the interview, my brother point-blank refused to let me join the service! He was worried about sending a woman all the way from Chandigarh to Chennai for the training, of the potential repercussions if anything went wrong and of what the relatives would say. I remember taking my mother aside and telling her to convince my brother before I run away from the house! Ultimately she did convince him, and I left for the training. There was a lot of noise from the relatives, but once I had topped my batch and got the gold medal, everyone was proud. It wasn’t easy, though.

HS: How was the experience of the training?

AB: Earlier, women were limited to the Army Medical Corps, the Army Dental Corps and the Military Nursing Service. Ours’ was the very first batch when they started the induction of women into the Army, so it was really an experimental batch of 25 women. When they started off they weren’t aware of our endurance levels. Initially for the rifle drill, where you’re expected to carry a heavy 7.62mm rifle and complete two rounds of the ground, they handed us canes instead because they weren’t sure whether we’d be able to take it or not. We obviously refused the canes, but to figure out an acceptable level of training was a challenge for them. Once we graduated and gave feedback for the second batch, and subsequent batches gave feedback as well, they realized girls can do equally well and have recently merged the women cadets and the gentlemen cadets into one course.

Of course, the physical standards were a little different, but in the first combined batch of gentlemen and women cadets, it was a woman cadet who was the recipient of the gold medal, which is very commendable. This was about four-five years ago.

HS: What is the perception within the Army of women joining the Army?

AB: When I got commissioned, my first posting was in Calcutta. Not a lot of people were aware that women were now joining the Army as officers, especially the jawans and the recruits. As officers, we would wear trousers and shirts, while the women in the Medical Corp would be in saris, which they were used to seeing. The moment I would pass from anywhere, the jawan would forget about saluting and would just blankly stare as to what is this. It wasn’t known to them and we would have to prove ourselves to them and everyone else around, and it was made harder by the fact that all 25 of us from the batch had made it to different postings, which meant there was just one woman officer in each station. From the second batch onwards they started posting at least two women officers per station to ease the situation. It was really difficult, but now of course everyone knows about women officers so it’s easy.

HS: According to you, why doesn’t the Indian Army have women in combat roles yet?

AB: I think the mental strain and safety are the biggest points of concern. It’s not really safe for women as far as Infantry is concerned because they have a really rigorous and hard life. Secondly, once you end up in a combat role you’re going to end up commanding, and I don’t think Indian men are ready to take commands from a woman. Even though women are doing well in the IPS, I don’t think the Army’s going to be willing to give command to a woman because commanding a battalion is very different, especially commanding a battalion entirely of men.

It may be possible if they start with inducting women into the battalions, but they’re going to need to work on the safety and security aspects. It’s going to take a lot of time to get there, but things are improving, so you never know.

HS: Do you have any advice for women who may want to join the armed forces?

AB: See, corruption is everywhere, whether in a civil job or a government job; you need to draw a line and decide what you want to do, that is important. With the new pay scales, the Army has started paying quite a lot, but initially when I joined we weren’t getting any money. If you want to serve the nation, wear a uniform, lead an adventurous life, then the Army is a good fit. The Army teaches you everything – you end up being a Jack of all trades, but Master of none. However, if you want to pursue a career related to what you’ve studied, or a specific field, the Army is not the place. For instance, if I wanted to start something related to my Microbiology degree after my service in the Army, it would have been too late because the kind of equipment used in the Army is very obsolete, plus I would have forgotten most of it. At the end of the day, one has to decide.

One thing I’d like to add is that even though incidents can happen anywhere, the Army is very safe for women. When you are moved to your field station you get accommodation to yourself, you have a mess where you can dine; so a lot of the troubles faced in the civilian life aren’t faced by Army personnel.