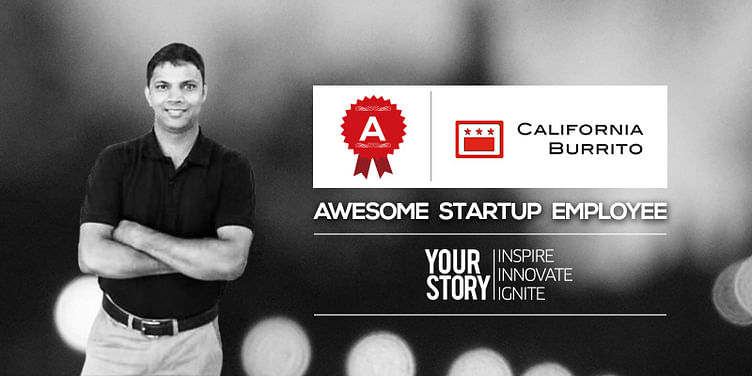 If a group of founders were to get talking the one topic that would definitely crop up would be - finding a perfect first in line for the day-to-day operations of the company, setting the founders free to focus on other things. Dharam Khalsa, co-founder of Claifornia Burrito, seems to have hit bull’s eye with Ashok Swain, this week’s Awesome Startup Employee.

California Burrito is a Mexican food eatery started by three Americans - Bert Mueller, Dharam Khalsa and Gaelan Connell who go a long way. It opened its first outlet in Bangalore in October, 2012. By the end of 2014 it had seven stores with a team of 100 employees. In the next five years they plan to have 500 stores in five different countries.

Ashok joined the company in 2013 and rose up the ranks to become operations manager. “As I focus my time and effort on new problems and opportunities we're facing, putting into place training programs for employees and contract farming for imported ingredients, I have total confidence in Ashok overseeing day-to-day operations and this takes a lot of stress off me. It gives me time for growing and improving the company.”

Ashok’s story is moving and his determination inspiring:

He hails from Puri, Orissa, where his joint family draws income primarily from agriculture. He finished his schooling from the government school in his hometown and completed B-Com from Utkal University. During his years in college, while he was away from his family, his eagerness to become self-dependent led him to start his own business with a friend. “We began selling our own brand (Sanitel) of cleaning materials to offices and hotels. We were able to sustain the business but competition prevented us from growing.”

“I was inspired by TV chef Sanjeev Kapoor to study hotel management after graduation but the financial position of my family didn’t permit that. In order to find work, I moved to Bangalore in 2004.”

He came to Bangalore looking for work. Since he didn’t speak any English it was hard for him to find a job. He started as an office boy on a contract but felt that he was not putting his education to good use and quit. A schedule of 12 hours of work also made it hard to attend the spoken English classes he had enrolled for.

This was followed by a stint in another company as an accounts assistant where he received good learning but the salary was a minimal Rs 3500 that made it challenging to survive. “I couldn’t afford non-veg food for the entire time I was working there.”

The year 2006 witnessed his foray into the food industry when he joined as a team member and worked his way up to the position of area manager. In December 2013, he joined California Burrito as area manager and within six months he was promoted to the post of operations manager.“Ashok played a huge role over the past year helping us streamline operations. We were very much a start-up when he joined, with loosely implemented processes and no real hierarchy. We created processes together and he currently enforces them and oversees operations," says Dharam. Ashok’s prime responsibility is to have smooth operation across all outlets, to provide best quality food and best customer service experience.

His role entails a lot of planning and implementation, co-ordination with the supply chain, finance and maintenance, providing manpower, training, motivation and developing the team to build sale and brand awareness and increasing overall profitability.

When asked why Ashok was moved from the post of area manager to operation manager within six mothns, Dharam is quick to say, “We noticed that he was handling problems we had not even assigned him and he was doing well. This made him a natural fit when our previous operations manager moved on.”

The founders value Ashok highly. Dharam confides that whenever he is working on a new project, he seeks Ashok’s inputs who due to his interest in learning how things work is a great partner to work with. “We've worked closely together on everything - from building our team to developing a great POS software for our operations.”

Ashok’s other qualities that make him a perfect fit for the role are his commitment to the quality of work and the thoughtfulness he brings to everything he does. He's also a rockstar performer under pressure. He's diligent, thorough, gives no excuses and indulges in no politics. When something is wrong operationally, he takes the responsibility and doesn't speak badly about the managers who may have caused the problems. He always builds the team up, adds Dharam.

Ashok’s focus is on giving the right direction to the team and finishing tasks on time. He is happy when customers have great experience. He enjoys working at this startup as his ideas are quickly implemented instead of waiting to be followed up by other departments. “I have interacted directly with the founders and I saw the huge potential in this unique concept in food business. I am excited about being able to contribute to setting up the company,” he says. His happiest moments are when he is able to recognize team members in meetings and reward the team.

His biggest challenge has been correcting the performance of one particular outlet, which was underperforming. “I worked hard on bringing down food costs and implementing our standards and now it is on the right track.”

Ashok unwinds at the end of the day by spending time with his family, and catching up on news and comedy shows. For his team he has one message-“Learn something new every day to achieve the best.”