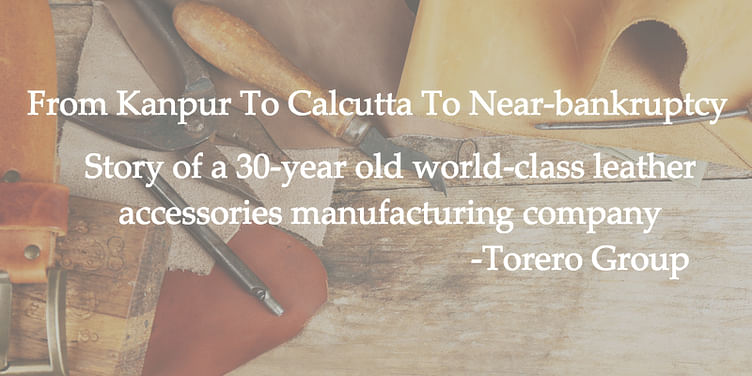 It is an Indian manufacturing company that totally aligns with Prime Minister Narendra Modi’s ‘Make In India’ campaign. It has nearly $20 million in annual revenues, employs 4000 workers and manufactures products that require a high degree of craftsmanship. You might even be using the products manufactured by this company with a 30-year history, without even being aware of the fact.

The young entrepreneur leading this company currently, gets called to MIT Sloan School of Management as part of a guest lecture on operations management for second-year MBA students. This lecture was part of a series along with 15 featured companies from around the world. And, he had Elon Musk, the founder of Tesla and SpaceX for company at this lecture series.

Here’s the fascinating story of Torero Group, the exclusive worldwide licensee of Cross’s leather accessories business, which is manufacturing world-class products and exporting to over 40 countries.

Origins: From Kanpur To Calcutta To Near-bankruptcy

Rajesh Gupta moved from hometown Kanpur to Calcutta in 1985 to reclaim some land that belonged to him. His family had a successful business two generations earlier, and so he dreamed of building something new with the same entrepreneurial mindset. In pre-liberalization era India, nothing came easy – but Rajesh went ahead and started his firm, Metropoli Fashions in 1988. Around the same time, the Government was opening up the leather accessories sector because it is an SME that is labor intensive with the potential to employ a large number of people. The firm took advantage of the situation and started exporting products to the US and Europe by producing huge volumes at low cost. It was primarily a cost focused competency.

But it wasn’t meant to be a straight line to success for the fledgling company. A large US importer defaulted on the payments and filed for bankruptcy protection, nearly pushing Metropoli in turn, to bankruptcy. Rajesh had to borrow and even mortgage his family home to keep the company afloat, until launching again in 1991.

The lesson had been learnt – there is no sustainability in a cost-focused capability. This important lesson was to play a major role in the future of the company.

Course Correction: From Cost To Quality

The next 10 years saw the company make many fundamental changes. The focus on low-cost manufacturing was completely stopped, as was exporting to the US. The focus was shifted to European countries including some Scandinavian regions. The firm started gaining more and more capability in high quality leather manufacturing and earned a good reputation in the niche. The manufacturing was also extended to well-known global brands such as Hugo Boss, Cerruti and DKNY.

But for the ambitious leadership team, this growth was just the beginning. The team started scouting for the next phase of growth that would enhance not just their capability but also build Intellectual Property (IP) that would sustain the firm through any market variations in the coming decades.

Mirroring the growth path of the Indian business Metropoli Fashions, a firm called Marroquineria had made its way up the luxury world a few decades earlier. Italy was the pioneer in exceptional quality leather accessories and the country started outsourcing the manufacturing of these products to Andalucia in Spain in the 1940s.

Pedro Montero Gago, a young gifted craftsman in the area, quickly picked up the skills to become one of the largest leather accessories manufacturers from the region. This reputation enabled the firm to manufacture for reputed brands such as Mont Blanc, Balenciaga and Hugo Boss. As luck would have it, the construction boom in Spain in the 1990s meant that Pedro would not find sufficient skilled labor to meet the burgeoning demand for leather products. So in the early 2000s, he started looking for partners with the scale, quality and meticulous process required to manufacture such global products.

Thus was born the partnership between Metropoli and Marroquineria that would spell tremendous growth for both the companies. Pedro started a unique technology transfer process to ensure high quality – the Spanish way – in manufacturing of world-class products. For 15 years, Spanish managers would visit Indian facilities, do the technology transfer, training and mentoring, thus ensuring their commitment to quality. The designs and material from Spain, married to the scale and skill of Indian workers meant huge potential. By 2007, Metropoli was the largest leather accessories manufacturer in the region and Marroquineria was the largest seller of leather products across department stores in Spain. The firm now has 11 factories, 8 of which are in India.

Rajesh Gupta’s son, Yashovardhan Gupta had finished his graduation in computer science and his MBA from the Indian School of Business in Hyderabad. After his post-graduation, he was working with Mr. Naveen Jindal, Chairman & MS of JSPL as Executive Officer, helping formulate and execute strategies for the growth of the multinational $18 billion OP Jindal conglomerate. “The two-and-a-half years spent assisting Mr. Jindal were by far the most exciting in my life”, says Yash. By 2009, Rajesh got his son to quit his job and return to the family business.

Upon returning and taking the helm at the business, Yash realized a few things: The high focus on quality over the years had increased the overheads disproportionately. It was a large 2500 employee company operating without a cohesive strategy. The IT systems and processes supporting the organization were archaic and not scalable.

Identifying the problems was the easy part for Yash. The infinitely harder part was to make the swift hiring and firing decisions, technology revamp and selling the idea that the old business model had run its course and would not scale further. Selling the new vision to the existing team proved to be a hard sell. “I felt like an outsider in my own company”, says Yash, who recalls the tough times.

Yash then sought out the counsel of his father’s friend and business partner, the Spanish craftsman, Pedro. Pedro understood Yash’s ideas and suggested that the best way to acquire core competency was to acquire a global license.

Given the internal resistance, Yash decided create a separate entity, Torero, that could leverage the capabilities of Metropoli, while building a new culture and brand that would be more amenable to the future plans. The next step was to identify and pitch to a brand that would take them on as partner.

Yash recalls of the two years – “I became obsessive...did not take a holiday for 2 years, and worked round the clock visiting and pitching to various brands. The only asset I ended up acquiring were air miles!”

He took a structured approach to identifying a potential partner, with a defined set of criteria – a well-known brand, no manufacturing prowess, not part of a major luxury house, and looking to extend the brand into leather accessories, more specifically for men. That is how Cross came into the picture.

Cross was established in 1846 in Providence, Rhode Island and is the official writing partner for the White House. It is a highly respected brand with a reputation for crafting fine writing instruments. It was also looking to expand into accessories with the same brand name, given that the global pace of growth of the accessories market was 16% annually. Their past experiments had failed since leather is a hard raw material to source. It turned out to be a perfect marriage.

Yash had to visit Cross HQ and other offices in Europe over a dozen times before being able to convince the board to award an exclusive long-term license for the brand name.

Having learnt from the evolution of Metropoli, the parent company, Yash has spent time in determining the strategic pillars for the company that should be the driving forces for Torero – intellectual property, distribution network, operational excellence and design. In addition, he has ensured new technology systems are in place and there are professional managers leading all functions (Operations, Sales, HR) based on a meritocracy. He recruited his friend from ISB, Varun Narayan as his COO.

The strategy seems to be paying off. Torero received the prestigious Frontier Buyers’ Forum Seal of Approval for the Cross Classic Century Global Passport Wallet. The Bluetooth enabled, Cross Grabado Tech+ Wallet for anti-theft and loss-proof protection earned an honorable mention in the Red Dot Awards 2015 chosen from among ~5000 entries.

“The focus of the future is going to be to de-risk the business dependency on brand licenses and scale, all the while maintaining operational efficiency and great design” says Yash. High on the agenda is to incorporate technology across the value chain. For example, the company has launched the Cross app, which will give the distributors a real time view of inventory at any time.

Yash also says there are more brands in the pipeline to grow the model that has worked for Cross. “We are now taking over licenses…why not take over complete brands in the future?”, says the excited Yash when asked about how he sees Torero participating in the over Euro 220 billion luxury goods market.

Why don't we have more such manufacturing success stories? What do you think?