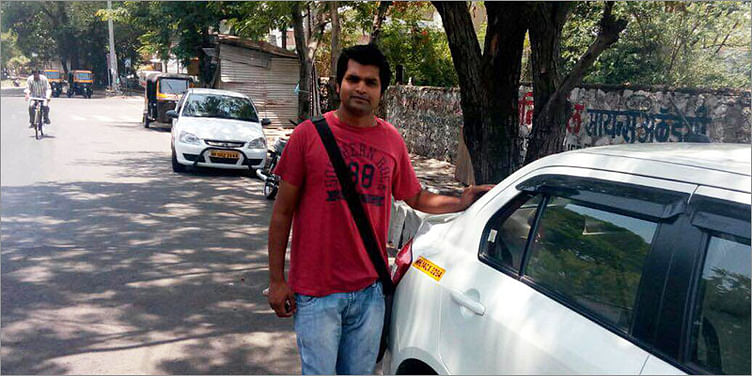 What does a civil engineer, a BA student, a student of journalism and psychology have in common? They're all cab drivers. It all started with a casual conversation - is the trend of student drivers picking up in India like in the west? Where do the students get the idea from? While talking to the cab aggregators seemed like the answer, we decided that we should take a drive with one of the student drivers, to get a deeper understanding.

My journey began from Mysore Road and ended at Indiranagar with Manjunath N, a student driver for Ola. Currently pursuing his civil engineering, Manjunath drives during the day and in the evening heads to college. “It was my brother-in-law who bought the cab; I decided to drive it and help. I have been able to pay my college fees, add to the house kitty and even help repay the loan on this cab,” says Manjunath.

Once considered a compulsion, cab driving today is seen as a way to create a sense of independence, a complimentary source of income and the first step to being an entrepreneur. Today many youngsters have found a novel way to earn money with organisations like Ola and Uber. For many, it has helped bring in an extra income into homes and even fund their education.

During my conversation with Akash, a student driver for Uber, he informed me that, “It is very much like how it is done in the western countries.” A student of journalism, from Pune, Akash uses the money he gets from driving a cab to run his family. He has also been able to fund his education. In fact, Akash has even become an entrepreneur. He says that because of Uber he has more cars and now manages five drivers.

Unlike regular cab service providers, these taxi aggregators are making it easy for the students to juggle work and studies. The cab drivers have a choice of logging in or out as per their convenience. Anand Subramanian, Director of Marketing Communications, Ola, says that his company invests heavily in building cutting-edge technology to suit the needs of the drivers, as well as in the overall driver ecosystem.

According to Sanil Bhatia, GM Uber, Pune, the core of Uber is to promote entrepreneurship. “Once we do that we give them the devices and ask them to run their cabs like how they would run a business.” After giving them the training and running a background check, these companies give students the opportunity to run their cabs as their own business. They are also given specific aids to help them get easy loans and better rates of interest.

“I have taken 15 days off for my exams,” told Manjunath as we cruised through the Bengaluru traffic. He adds that not once was he forced to take on routes or drive during his exams. For Manjunath, driving is something that he enjoys doing as well, he says that the cab is his brother-in-law’s but with his earnings he repays the car loan.

Citing an example, Anand explains that in the past two years, Ola has come up with several initiatives to help foster the growth of drivers. They have created a network of manufacturers and financial institutions for drivers to buy cars at a good market rate, and have even set up a fund of Rs.100 crore to enable drivers buy their own cars.

The company claims that over 70 per cent of their drivers are entrepreneurs. “Over 15,000 drivers across the country have benefitted from our program,” says Anand. These student drivers belong to this very micro-entrepreneurs program, which allows students to not only sponsor their own education but also support their families.

Both Ola and Uber do not follow any strict contracts regarding days, hours and time period for driving the cabs. So several student drivers have the choice to decide when they want to drive and when they do not. During exams, they take close to 15 days off, and nobody questions them. These drivers are a reflection of the global trend that is catching up in India, where students (PhD, engineering, or arts) look at cab driving as a supplementary source of income.

Bringing in insights and perspectives

A conversation with student drivers can be quite insightful and entertaining, at least for the passenger.

Mostly quiet, Manjunath had some deep insights into what the government can and should do for the city. Being ferried around by a student of civil engineering, I personally learnt something about construction and structures during our drives.

Akash has even worked to bring in a revolution and change. During our conversation, Akash said that a road in Pune has an unnecessarily heavy tax and duty on it. Akash has questioned the toll keepers and has even recorded the whole proceedings.

Also Read: This is Ola’s ambitious plan to empower 50,000 women as driver entrepreneurs in the next three years

Driving for studies and for different ends

For Manjunath, juggling a job and studies isn’t new (before driving a cab he was working in Pune). “I came back to finish my education. Since I was working for builders I became all the more interested in civil engineering and I decided to get a degree in civil engineering,” says Manjunath. Adds another student driver Paramjit from Chandigarh, “I keep my books in the cab and make it a point to study between bookings.”

Shahrukh Khan, a student of Pune University, decided to drive a cab on a part-time basis which has become a source of independence for him. “When I told Uber that I wanted to study and work as well, they gave me a lot of encouragement and even told me that it would be easy to juggle the two,” adds Shahrukh. Since his college timings are from morning 7 am to 11 am, Shahrukh, drives the cab from evening four to 12 pm in the night.

Manjunath, hopes to get through his campus placement and join possibly a Prestige Builders or another famous builder. For him, driving the cab is a means to a bigger end, for Akash it is a way to entrepreneurship and for Shahrukh it is a means of independence. For each, the taxi aggregators have given a purpose and a way forward.

Before on-boarding the student drivers, all the cab drives go through a thorough background check, including collecting personal and professional documentation. They also run a complete criminal check and police verification.

“To accomplish this, we have hired AuthBridge, India’s leading background verification company and also one of the few organisations to have ISO and ISO-ISMS certifications in the industry,” says Anand. He adds that more than 20 to 25 per cent of the company’s drivers are either professionals or students.

After a background check, the drivers go through a strict training program that involves behavioural training, etiquette, route training, and technological training. Anand says that the student drivers are encouraged to take ownership of the ride like entrepreneurs, and not just as drivers.

Uber cab drivers too go through police verification checks; they need to provide their personal and professional documentation. “We run thorough checks on these drivers and we even ensure that the drivers go through a soft skills training,” adds Sanil.

How does this help the companies?

Since both Ola and Uber are focused on creating micro-entrepreneurs, they encourage the students to take on driving as an additional source of income. In many cases they find that the student drivers are diametrically opposite from one another.

For some students, it would be a source that helps them creates a sense of independence, where the students can pay their fees and not depend on their families. For others like Paramajit and Shahrukh, apart from education it is also a source of income for their families. Many even begin their own fleet of taxis like Akash or Manjunath, who is now repaying the loan on the cab he is driving.