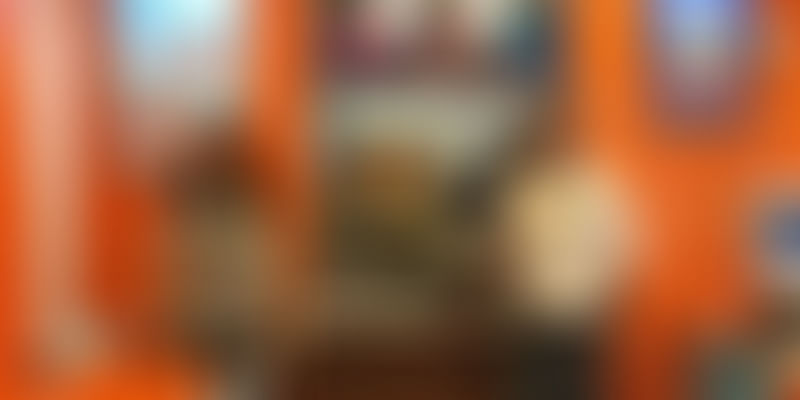 If you were to make a list of expenses in college, food and beverages would top that list and food hotspots would be the meeting point. It is this love for food that gave birth to Sandwedges, a Sandwich and Burger QSR by the students of IMT Ghaziabad.

The idea was to bring something as popular as sandwiches in Mumbai to the north. “We also followed the philosophy of ‘Start small – Break even early - Replicate Success’, says Arushi Sachdeva Co-founder of Sandwedges.

Since both the Founders Arushi and Chaman had lived in Mumbai, they thought it would be nice to bring the Mumbai street sandwiches to Ghaziabad. Arushi says they believed sandwiches are a great food offering, but it has always been a “side hero” to other delicacies like burgers, pastas and pizzas. She also says that despite facing resistance, they were determined to open Sandwedges.

Arushi says it was Chaman’s love for business and her love for food that created Sandwedges. “We wanted to do something together and discussed several ideas. However, Sandwedges seemed perfect,” says Arushi. She took up the product and marketing, and Chaman managed the business strategy and cash flow management.

Talking about the challenges, starting a food joint in Ghaziabad was a challenge in itself. Not hailing from Ghaziabad, the duo felt certain inertia from different elements of the society. “We have seen customers who have showed us guns when asked to pay. There have been so many who have not paid by showing off their connections. On the other hand, we also have customers who love us, talk about us, refer us and respect us. So it has been a mixed bag of customers for us,” adds Arushi.

The first store was launched just after they had completed the first year of B-school. Arushi says that it wasn’t easy, juggling classes, assignments and the outlet all at once, “but if you were to ask us if it was worth the trouble, the answer is definitely yes!”

Getting the ingredients right

Running a food outlet has several elements and factors associated with it. One of the biggest tasks is ensuring that the ingredients and kitchen equipment are in order. “There are companies making kitchen equipment, whereas others acting as backup kitchen to your restaurant. We take extreme care of what is being sourced from which vendor. We usually select the best quality possible and then try to negotiate on the prices,” adds Arushi.

The sourcing of food items is done centrally at one of the outlets and then distributed according to requirement at both locations. Arushi says that sourcing it together gives the team leverage to bargain because of the double consumption rate.

Like most retail outlets one of the main challenges faced by Sandwedges is the idea of scalability. Arushi also adds that big food outlets are able to master their assembly line and standardise everything. “We need to go through a learning curve,” she adds. Customers and their tastes are evolving, and today people keep looking for something new. “In this light it is very challenging to keep growing while maintaining the highest standards,” says Arushi.

Currently, Sandwedges is operational in Ghaziabad, the first outlet being about a kilometre from the IMT Ghaziabad campus and the other in an IT residential area near Noida called Indirapuram. The duo claim that they have a total of 1,200 customers and earn over Rs 15,000 to Rs 20,000 in each outlet every day. “We are working very hard launching new products and spreading the word about us so that we fulfill our dream of achieving Rs 1 crore per outlet annually by August,” says Arushi.

Creating a market Arushi says that when the duo launched Sandwedges, a sandwich was not a food item people would go out to eat in Ghaziabad. They thus worked hard to create a market for sandwiches as a product. Along with that they also began offering innovative shakes, which according to Arushi were never seen before in the area.

“Moreover, another unique thing about us is that we are a ‘No Chef’ chain. I mean, we do not have a trained chef on board. We serve what we love, it’s as simple as that. All the recipes have been put in place after a lot of fine tuning and tweaking of our favorite items,” says Arushi.

After a product is decided and finalised upon, it goes through a customer trial phase. Only after positive customer feedback is the product is launched. Anybody in the team can suggest products. The target market for Sandwedges consists of students. Arushi also adds that there are over ten engineering colleges in Ghaziabad and they get customers from every single one of them.

We are big on word-of-mouth marketing. In fact, if I remember correctly, aside for a few offers here and there, we have basically let word of mouth do the magic for us. What would your reaction be if a customer comes up to you and says he’s had your food 40 times in the past 60 days? That’s the kind of word of mouth we are talking about. And most of our customers come in groups so the ripple effect is awesome!

Their best selling product currently is the Spicy Veggie Burgwich invented by the co-founders, and has currently sold over 40,000 pieces. Sandwedges is a purely bootstrapped venture, which is generating positive cash flow. However, the team is looking for a seed round of funding.

Entrepreneurship is no longer restricted to just professional employees. The student base today is fast catching up and bringing in innovative ideas Whether it is the BITS Pilani students bringing in DIY home automation systems, Gullu’s kitchen or the 3rddhaba, all have seen roots in the student base and community. Today, youngsters are more eager to test their ideas, and with the current growth in the startup ecosystem, student entrepreneurship is witnessing an upward wave.