From a bank made of women, for women to a community for farmers, tracing the journey of Chetna Gala Sinha 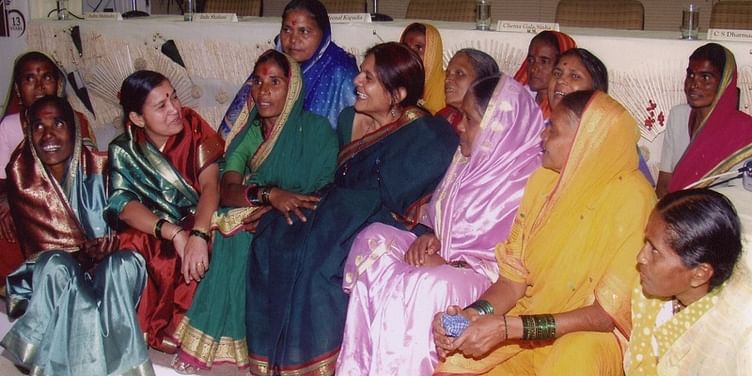 A group of women from Mhaswad village in Satara District in Maharashtra were sitting in front of an RBI bank official. They were waiting to get a banking license approved, a license that was rejected six months back, as the proposal had thumb impressions. But this time the same women were back and armed with an education so that they could get a banking license for Mann Deshi.

They told the officer,”You had rejected our licence because we were illiterate; today we’ve educated ourselves and are sitting here. But you can’t blame us for our illiteracy, because there were no schools in our village when we were growing up.” The women challenged the officer.” Tell us to calculate the interest to any principal amount, and ask any of the bank officers to calculate the same using their calculators. And see who is faster and accurate.”

Chetna Vijay Sinha knew at that point she had made the right decision getting the women of her Mann Deshi Foundation along. Six months back she had gone back to the village dejected. But things were different now. She knew they were used to rejection and were determined more than her. Started in 1997 by Chetna, the Mann Deshi Bank is a Cooperative Bank run by women, for women. It is one of the largest micro finance banks in Maharashtra.

Born and bought up in Mumbai, Chetna had moved to Mhaswad after her marriage to Vijay Sinha. For Chetna, social and public causes were an important part of her life. She in fact, had met her husband when they were a part of the Jayprakash Narayan Movement.

However, her move from the city to the village was fraught with its own challenges. For the first time, Chetna realised the difficulty of actually having to wait for a public mode of transport for hours, she also realised how difficult it was to communicate without electricity.

“Apart from these, one of the biggest challenges I faced was the lifestyle. In Mumbai, I have never had to worry about several things like my appearance, but the village was different. Being a married woman I was expected to wear the mangalsutra, but I have always been close to the feminist movement so I never wore one. This was new to the villagers, they would keep asking me to wear and dress in the traditional fashion,” adds Chetna.

While she was questioned, Chetna believes that the society accepted her and it opened the venue for several social concerns. Today, she is very much a part of this small town in Maharashtra, especially, with the opening and conceptualisation of the Mann Deshi Foundation.

Beginning of a new chapter

It was 1986-87, that a new amendment to the Panchayat Raj Bill was brought about which made it mandatory to reserve 30 per cent of the Panchayat for women. Chetna began talking to the women in her village and motivating them to participate in the Gram Panchayat. Soon she established the foundation to train women in the operations and workings of local self- government.

One day Kanta Amandas Salunke a blacksmith walked into the foundation and told Chetna that she wanted to save money in the bank but the banks were refusing to open an account. Chetna was surprised, so she decided to go to the bank with Kanta Bai.

The bank officials informed her that Kanta Bai’s savings were too meagre. This struck Chetna as very odd and she decided to start a bank for women with meagre savings like Kanta Bai. “Everyone has aspirations, they just need the right opportunity,” adds Chetna.

With the bank in place, Chetna and the bank employees faced another challenge – the women couldn’t come to the bank as they would lose their day’s job. So Mann Deshi began doorstep banking. The next step was getting the women to keep their passbooks with them. The women were reluctant as it meant that their husbands would know their savings and use it up for alcohol. To combat the issue, Mann Deshi issued smart cards. Soon Mann Deshi began giving loans to the women as well.

Also Read: Victim of abuse and bullying, Shovona shows what it takes to turn the tables around

The goat rearer who needed a cell phone

One day Kerabai walked into the bank saying she needed a loan to buy a cell phone. The bank officials thought that her children had coerced her into buying them a cell phone for them. But Kerabai said that she wanted the phone for herself, because she was away from home rearing her goats. And she needed a mode of communication with her family.

It was during this conversation that Kerabai asked Chetna to train her in the use of a cell phone. This in turn gave Chetna the idea of opening a business school for these women. Since most of the women were illiterate, the Mann Deshi Foundation began taking audio visual classes. Shortly the women even established an in house radio for the women of the area. The foundation has thus helped rural women establish their own businesses.

“These women are my teachers, they teach me new things everyday and one of the biggest lessons I learnt in determination and courage was from Sagar Bai who ran a Chai stall and a young fifth standard girl, who wanted to buy a cycle so that she could go to high school,” says Chetna.

Citing Sagar Bai’s example Chetna says, “With our help Sagar Bai had started a chai stall, but one day the police arrested her as she was using a domestic gas connection. They kept her in custody for two days. We thought she would be broken and not want to continue. But when she came back, she told us – I’ll run a profitable business with a commercial gas. Today we have students from Harvard and Yale coming in to understand her business model.”

Apart from helping women with business and vocational training, Mann Deshi also provides loans and even bicycles for girls to go to high school. It was during one such day that Kerabai came to the bank to mortgage her gold.

The incident opened a new page in Chetna’s and Mann Deshi Bank’s life. She says,

“I asked her why she was taking the loan- I assumed it was for the education of her children and she said, ’I have mortgaged my gold to buy fodder for my animals. She further added that, it’s a bad drought. There is no fodder in the fields and so I am going to buy fodder for my animals.’She angrily asked me that, ’Despite being educated and learned, don’t you observe the situation around?’I asked her what she meant by that. She said, ’There is no water in the entire area. I can mortgage gold and buy fodder. Will you give me water if I mortgage my gold?’She added, ’There is no drinking water. All rivers and ponds are dried, from where the animal will get water to drink?” We can ask for water, scream for water, what can thirsty animal do? You move around the world. Do you not realise the simple thing that animals need water too?’ After listening to Kerabai, I could not sleep that night. I shared Kerabai’s complain with my husband.”

The next day Chetna saw the board and decided to start a cattle camp where water arrangements would be made. Chetna says she was nervous as she had no idea where the water and fodder would come from? But the people took care of it.

Within a month, nearly 7000 farmers with 14000 animals came to the cattle camp. This was the biggest cattle camp started in Mann taluka (one of the worst drought affected areas of Maharashtra-average rainfall in this area is 4.5 inch) of Satara District. People dug new wells for water and several trucks of fodder arrived in the camp every day. “Support came from everywhere,” adds Chetna.

Farmers from nearly 77 villages started coming in to the cattle camp. Though government aid did come in, it didn’t make life easy. “After bringing their animals and walking 30 kms in the sun our staff would assert farmers, ‘that bring your and your animals photo ID.’ Women would cry and respond that, ‘my animals have not drunk water since 8 hours. First feed them water and then asked for the photo ID,” says Chetna.

The bringer of rains

Chetna says that looking at the farmers standing in queue for water and fodder deeply affected her. So, the team created a system where fodder and water were provided to the sheds where the animals were placed. Soon the cattle camp became home for the farmers and their families.

Consequently the camp was extended for one and a half years. One day, a young pregnant woman was about to deliver a child. “I was tensed; I did not want to take any risk. I requested the pregnant woman and her mother to go back to their village. They said, ‘that they will not do that, there is no water there in their village,” adds Chetna.

However the woman delivered the baby at the cattle camp.

Chetna says: “I always called myself a rationalist but on that day, after she delivered a child, it rained. The community at the cattle camp decided that he should be named as Megharaj, the king of the rains. The environment at the cattle camp changed immediately. One of the farmers asked, ’The child who was born in such a pathetic conditions brought the rain for us. What are we going to gift him?’ Our Bank CEO Rekha asked him to collect ten rupees from everyone. And within an hour, 70 thousand rupees were collected. An additional sum was given by the Foundation and an FD of INR 100,000 was made in the name of Megharaj. This was a gift from the cattle camp.”