With over 40 counselors onboard, ePsyclinic takes on mental health online 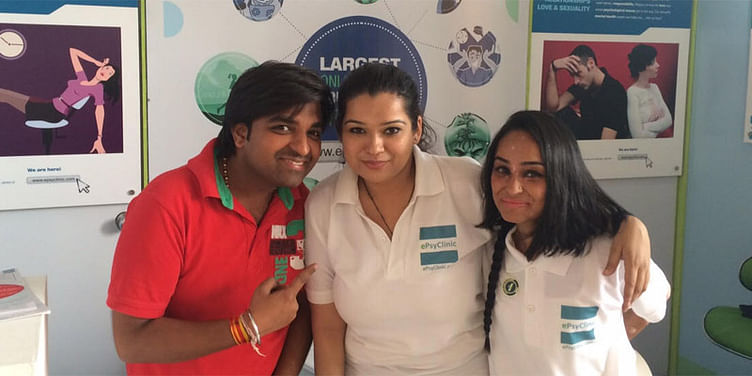 When Shipra Dawar was suffering bouts of homesickness during her MBA in Australia, her professor told her to seek professional help. Her first reaction was quite bitter, “Does he think I’ve lost it?”

Two sessions of therapy made her realize that it was not abnormal to be anxious or stressed.

“Abroad there is a sort of normalcy to mental illness, whereas in India there is a huge stigma around it. I knew that someone had to break this notion,” says Shipra.

Four years later, she built ePsyclinic to do just that.

Gurgaon girl Shipra finished her undergraduate and graduate studies in business at the Australian National University after which she took up consulting with Boston Consulting Group. This is her first attempt at building a startup.

After her experience with therapy in Australia, Shipra saw a huge difference when she came back to India. Two things bothered her, firstly the stigma around getting help for mental issues, and secondly, inaccessibility issues with respect to psychiatrists and psychologists.

Her immediate trigger was different.

“A friend of mine, an awesome guy, who went to IIT and IIM, was going through a rough patch in his life. He was quite depressed, so I told him to go for counseling, and he was agitated. He asked me if I expected him to leave his job and sit in a psychiatric ward all day waiting for his turn to come,” said Shipra.

This conversation with her friend probed her to think if there was an easier way to get help. In no time, she found her answer – it all had to happen online.

Over the next few months, she researched and brainstormed on how to make the platform effective, and launched ePsyclinic.com in early May.

Imagine an online platform where people who think they need help can text chat, audio chat or video chat with psychiatrists or psychologists. That is what ePsyclinic.com is all about.

“Offering consultations online makes it possible to get services from psychiatrists and psychologists from different parts of the world, as there is a clear dearth of counselors in India,” added Shipra.

A typical counseling session lasts between 20 and 60 minutes, depending on the complexity of the case. While the first session is free, subsequent sessions range between Rs 600 and Rs 1,500.

The Gurgaon-based startup currently has 15 psychologists, four psychiatrists, and one gynecologist available full-time, while 20 more resources are undergoing training to be added soon.

In the last two months, ePsyclinic has done over 1100 sessions.

What’s the training all about?

The six-week training module designed by ePsyclinic.com is an intensive module that equips psychiatrists and psychologists to read chat, audio, and video based cues, and help them to make appropriate diagnosis.

“Reading the cues is often the biggest challenge in telemental health diagnosis. For example, they need to be more intuitive in assessing a person’s mental health based on factors like the speed of typing, lag in talking, and distracted conversation etc.,” says Shipra.

This bootstrapped startup has not raised external funding for a reason.

“We chose it to be this way and did not seek any funding as yet because we wanted the core offering to develop without any dilution,” says Shipra, adding that they would be looking for funding soon.

Peek into some interesting observations

ePsyclinic.com has counselled people with marital problems, work-related stress issues and insecurity issues. The portal has also seen some new trends in sexuality-related issues. According to Shipra, quite a few people talk about coming out in the open.

“We have had men coming for sessions with depression because they could not grieve a loved one’s death due to responsibilities and societal pressure. They openly expressed, even cried and worked with the psychologists to move past those painful memories,” she says.

As more and more people are becoming conscious about these alarming numbers and mental heath in general, startups in this space are becoming a common occurrence. Even last month, we featured a Bengaluru-based startup, HealthEMinds, which provides video counseling and mental health support, while keeping the identity of the callers anonymous. (Read full story here.)

“We are creating a state of the art emotional and behavior tracker and self management apps. Apart from this, we will also be opening India's first completely virtual clinic later this month,” adds Shipra.