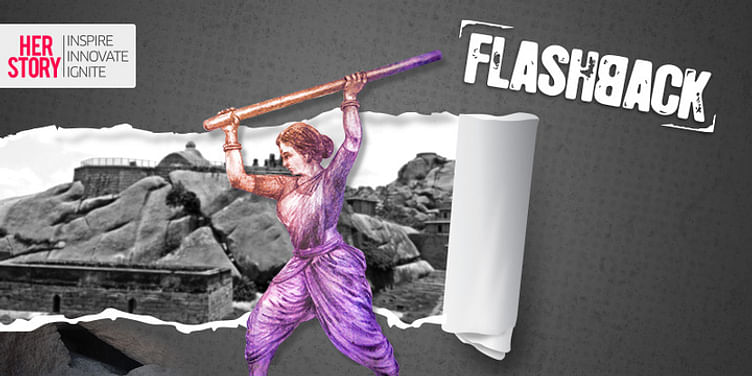 Chitradurga is a fast growing town, 200 kilometres north-west of Bengaluru, the capital city of Karnataka. The rocky terrain, distinct to the region has been witness to legendary battles and significant episodes of the epic Mahabharata. However, it is this one story that stands out in particular.

Chitradurga was ruled by the Nayaka rulers who were vassals (holders of land by feudal tenure) in the Vijayanagara Empire.A former soldier,Timmana Nayaka, rose to the rank of Governor of Chitradurga as a reward for his excellence in military achievements, from the Vijayanagara ruler.Haider Ali who had usurped the throne from the Wodeyars of Mysore attacked the fort of Chitradurga fort in the 18th century during the rule of Madakari Nayaka IV. Despite repeated attempts to establish control over Chitradurga, Haider Ali did not succeed. A frustrated Haider Ali, then lay seige to the fort. A chance sighting of a woman entering the fort through a crevice gave him an idea of pushing his soldiers in. This crevice (kindi in Kannada) was guarded by Kalanayaka who had a wife by name, Obavva.

One day when Kalanayaka was away for lunch, Obavva was on guard. She spotted a soldier trying to sneak in through the hole. Armed with nothing but her presence of mind, Obavva struck him hard with the onake she was carrying. ‘Onake’ is the Kannada word for a long wooden pestle used to pound paddy. She struck him so hard that the enemy soldier died with just one blow. Obavva didn’t stop there. Gauging the enemy’s moves, she dragged the dead soldier’s body away, to avoid suspicion. The lone woman did not let the situation deter her. As the soldiers tried to sneak in one after the other, Obavva killed each of them and hid their bodies.

Kalanayaka was stunned to find Obavva with a blood stained Onake amidst several dead bodies of enemy soldiers. She was found dead on the same day, owing either to the shock of killing so many or having being killed by one of them. The exact cause of this brave heart’s death could not be ascertained. Although she had saved the fort this time around, MadakariNayakaIV’s army could not hold it for long. They ultimately lost to Hyder Ali during 1779.

Neither untimely death nor defeat could mar the achievements of a guard’s wife. Obavva stood up when the situation demanded it. With no prior experience in warfare, she displayed exemplary courage in making the best out of whatever little resource she had to prevent the enemies from sneaking inside the fort. In doing so, she has set an example for each of us to take on the challenges life keeps throwing.The crevice which she once guarded is now called Obavvana Kindi.Chitradurga has a stadium named after her and the legend of Onake Obavva continues to marvel both kids and adults alike.