More Indians have access to television than to tap water. Is this freedom? 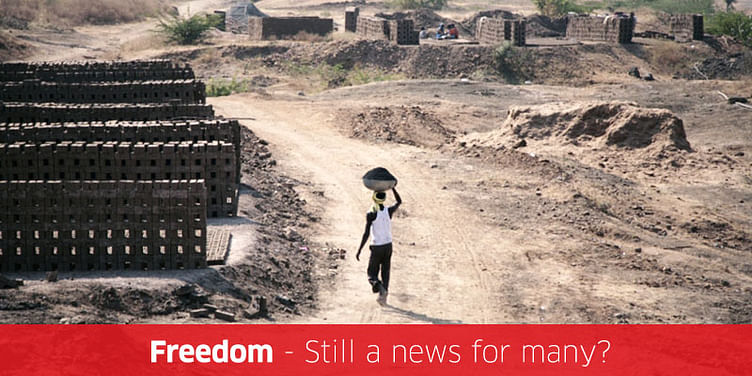 Today is a special day for all of us. A day to ponder over the lives and times of the men who sacrificed for the formation of a vibrant republic we live in. It’s time to follow in their footsteps in questioning our own times. In the words of the well-known Hindi poet Dhoomil –

laden on a wheel

or does it have a greater meaning?)

As India enters its 69th year of Independence it’s time for some serious introspection. Today we must spend time and ponder on whether we have been able to live up to the dreams of the great men and women who brought us the vanity of living in a free democracy. Today we must try to understand whether 68 years of political freedom has changed the life of the common man? And more importantly, what needs to be done further.

India has certainly benefitted from being politically free. We have emerged from being a colony exploited for economic gains into a social democracy where each person, irrespective of his wealth, gender, religion or social stature has a vote, and hence, a voice. Democracy has indeed saved us from the horrors of poor economic policies which threw Bengal into a state of famine every few years during the British Raj.

Freedom – still a news for many?

Beyond the top 10% of India’s populace, this freedom however, is still news. We still fall short on most globally accepted standards of human well-being and progress. We as a country still take for granted a majority of our citizens. As of 2014, India ranked 135th in the Human Development Index (HDI), a measure that takes into account health, education, literacy and life expectancy to gauge the quality of life. While we might shy away from our problems claiming India as being relatively young, and most countries which won independence after the Second World War are faring worse, let’s also take into account that all other BRICS nations have performed better than us.

The literacy rate in India has risen from 12% during the end of the British Raj to 74% today, but we are still way below the world average of 84%. The stark gender disparity in education is also evident. Among the age group of seven years and above, the male literacy rate is registered at 83% vis-a-vis the female literacy rate of 67%. Similar disparity is seen between the rural and urban populace too. What is more worrisome is that the current rate of growth is slower than that of the previous decade. India spends only 3.1% of its GDP in education, ranking 143rd in the world. Given that we rank 180th in world literacy, this must change. The dream of universal education in India, despite being a constitutional guarantee, remains unfulfilled.

The story is similar in healthcare, too. India ranks 139th in life expectancy, behind countries like Iraq, Bhutan and Namibia. As far as public healthcare is concerned, we spend lesser public money per capita than just four other countries – Myanmar, Indonesia, Sudan and Nigeria. India spends only about 1.2% of its GDP in healthcare, which is about 4% of the total government expenditure. Despite India’s 50% increase in GDP since 1991, more than one third of the world’s malnourished children continue to live in India. 44% of our children under the age of 5 are underweight. 72% of infants and 52% of married women suffer from anaemia.India remains home to the highest number of hungry in the world. We did see a reduction in hunger between 1990 and 2015 as the numbers came down from 210.1 million to 194.6 million. This reduction, however, when compared to a non-democratic country like China where the number of hungry has come down from 289 million to 133.8 million in the same time period, should make us wonder whether we lack the collective will to bring a strong and serious change in our country.

India’s gender equality fairs poorly too, with a rank of 127 out of 153 countries; it shows how much needs to be done in increasing the reproductive health, empowerment and labour market participation among our women. According to a recent UN report, India ranks 117th in happiness, below countries like Pakistan, Palestine and Iraq. More people have access to television than to tap water at home in India. We don’t even have the moral high ground to fall back on tradition, as, according to a recent survey, over two-thirds of elderly people in India say they are neglected by their family members while one third of the elderly claimed to have suffered physical or verbal abuse. These are not politically debatable issues but hard social facts.

The recently released caste based census data show that out of a total number of 17.91 crore families which live in villages, 10.69 crore are deprived. 5.37 crore households in rural areas are landless and derive a major part of their income from manual labour. A substantial difference was found in the standard of living of India’s Scheduled Caste and Scheduled Tribe citizens and others. Fewer than five per cent of SC and ST households were found to have a person who earned more than Rs 10,000 per month; while for other communities, there were twice as many households.

The problems with India’s agriculture are well known. The other day, 25,000 farmers from Mathura asked for the President’s permission to commit suicide. This, no matter how depressing it sounds, is the hard reality with our country where 60% workforce still depends on agriculture. According to NCRB data, the total number of farmer suicides in India since 1995 had crossed the 300,000 mark in 2014, and there are serious charges of the data being fudged. Reasons behind Indian farmers in distress include monsoon failure, high debt burdens, genetically modified crops, government policies and public mental health. With improper land acquisition laws, the scenario will only get worse.

All is not lost

Unfortunately, despite showing progress, India today is fraught with inequities. According to P Sainath, India has 56 billionaires who account for 12% of the country’s GDP, while there are 360 million people who are below the poverty line. Income inequality in India has increased by 2% in the last year.

But all is not lost. In fact, there is a very good chance for India to become truly free in terms of dignity and social and economic equality. With measures like NREGA, Right to Education and Public Distribution System in place, there is still great hope that the deprived majority will join the mainstream and start benefiting from India’s development story. Although a lot needs to be fixed at the implementation level, with massive welfare measures in place, India is at least attempting a counter attack on spiralling poverty. As the saying goes, “Poverty is a complex problem, hunger isn’t. Give them bread and they will find a way out of their problems.”There is great hope in technology, too. IT eliminates the middleman, which in the case of government is a dysfunctional and corrupt delivery system. Technology in governance will pro-actively bring change, positive change, making the system as a whole more accountable and transparent. Rise of the social media is also a massive movement that raises hope. Citizens can now come together, engage and discuss their problems. Even if mass media tends to ignore people, social media continues to be citizen driven.

The other great advantage India has is the demographic dividend. India is an overwhelmingly young country. And as is true of youth everywhere, we are a restless and impatient populace. Young India is coming up with innovative solutions to extremely complex problems. The growing entrepreneurial spirit among young Indians is just one example. It was the same collective will of India’s youth, which 69 years ago, had brought us political freedom. There is great hope the same might happen again, this time ensuring the freedom reaches where it is long due.

And most importantly, we still have democracy, which ultimately seals the deal in people’s favour. Each one of our opinion counts. No matter how voiceless most of us seem, in a fairly complex way, each voice matters. People in the past have collectively rallied their ideas and brought in change. It is possible at every level. Even today. Especially today. If India’s story of freedom has taught us anything, it is this.