Representation of the self through Sakhshi Mahajan’s The Portret Project 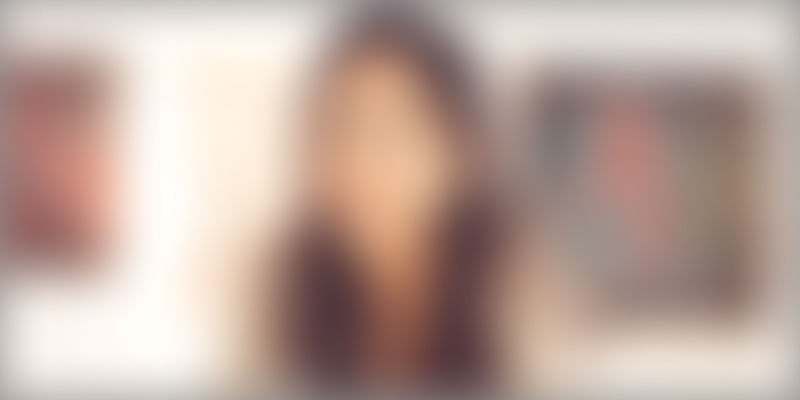 “The transition from America to India was my biggest challenge. The art world was almost a decade behind what I had been exposed to, so finding my place within it was hard. Another challenge was finding the right mentors and patrons,” says Sakhshi Mahajan, Founder of The Portret Project.

Sakhshi’s exposure to art began as a child since both her father and grandmother were art enthusiasts. The visual arts drew her and she could spend hours at the museum, curious to learn more.

Though she loved art, it was not the epicenter of her life or something she wanted to make a career of. “At that age I thought I would be a banker or work for a think tank.”

However, over the years things were to change and art was to become Sakhshi’s world.

From New Delhi to Chicago

She finished her schooling at Vasant Valley School, New Delhi and took off for the University of Chicago for a major in Economics. In her third year she realized that the rigorous interviews for banks and consulting firms did not interest her. “I had no direction and had no idea what I was going to do post graduation.”

At the end of her third year she participated in a study abroad programme in Greece that was focused on Greek civilization and history. This was an eye-opener as it made her realise how crazy she was about the history of art and artefacts. “I immediately decided to explore this further and due to the flexibility of the American education system, I was able to pursue a minor in art history in my final year at University. I just followed my gut along the way and never succumbed to peer pressure; it was the best decision.”

Keeping up with her new discovered passion, Sakhshi interned at the Philadelphia Museum of Art and Gagosian Gallery in New York. Both experiences proved to be great and holistic learning experiences. At the art gallery she was involved in exhibition management, library archiving, auction data cataloguing and sales assistance. At the museum, she was exposed to master artworks through permanent collections and temporary shows. “I learnt about historical movements, traditional mediums and the importance of provenance.”

This experience triggered the desire to start her own initiative to promote artists. Since it was not financially feasible for her to stay in New York and she was also curious to explore the Indian art scene, she returned to India in 2012.

“I decided to start promoting young Indian artists works, curated shows for artists like Rohit Chawla and also worked with an Israeli art gallery, The Bruno Art Group, at the India Art Fair. It was an experimental phase, but dealing and promoting art convinced me start my own gallery,” she says.

She plunged right into it by hosting and curating art shows to promote young Indian artists. A year and a half later, she notched it up by conceptualizing and starting a gallery called The Portret Project. The aim of The Portret Project is to explore important questions of how the self is represented and defined through art shows, curatorial projects and commissioned assignments. The word ‘portret’ also means portrait in Dutch. This was drawn from her own experiences and travel to Amsterdam in 2013.

“At Amsterdam I was exposed to the intimate, realistic and emotive history paintings of the Dutch golden era artists. Completely mesmerized by the dramatic effects and movement in these paintings, I started researching about portraiture. In history, it was common for an artist and a patron’s relationship to initiate with a portrait and what enthralled me was the evolution of this art form. The 20th century is exemplary in showing this change and the transformative qualities of those 100 years continue to impact the way we look at, think about and mediate our response to artwork. This helped me conceptualize The Portret Project.”

The Portret Project follows a three-fold model and these include art shows and art fairs, curatorial projects and commissioning projects and public art projects. They commission portraits for private clients as well as commission large-scale public installations for events. “As regards our curatorial ventures, they are educational in their approach and aim to take art to a larger audience. We also work on projects using diverse ideas and tools – from the most traditional to the utterly contemporary – to question our thoughts about ‘the self’. This includes our educational projects such as #UNEXHIBITION where we invited viewers to a curate a show and exposed them to the process of art. This interactive process made the audience the enablers of the art experience rather than merely passive viewers.”

“I think art is supposed to have a much wider reach. Art can be intimidating for a first time visitor and can be associated with a sort of elitism. This coupled with the lack of art education in India has led to a situation where art is characterized as being inaccessible. In a nascent market inaccessibility can pose to be a huge detriment/deterrent. As a result of all this, there seems to be a general lack of interest in art in the country.”

Sakhshi is working to make art accessible, friendly and approachable. Her aim is to make the younger generation appreciate art and eventually start collecting contemporary art.

Art is a seasonal business, and involves huge initial investments. “There are a lot of risks, returns are long term and all this requires patience and perseverance. I am always broke, anything we make goes back into

the business,” she says.Sakhshi also faces the challenge of inefficient and unprofessional work force. She says, “The biggest void in our market is art education. Half our gallery mandate is to carry out public projects and events that will engage and eventually educate people about art. Building credibility and having people take me seriously due to my age and the hierarchical nature of the field I am in.”

As a woman entrepreneur travel to remote areas to source work and meet artists is an experience that has enriched her but also has its own challenges.

“I love waking up to work everyday, I need to think of creative solutions and keep ideating. That keeps me motivated. But besides support of friends and family and work outs that help dissipate negative energy. Most importantly, Buddhist chanting has become the centre of my life, it is my permanent solution to every obstacle I face. It has made me aware of my limitless potential and that anything is possible.”

Sakhshi has an exciting future that beckons her. She plans to pursue her MA in the next few months. While she studies she will continue to run the gallery and work across countries.

“Art is a global business and this is going to be a huge stepping-stone. We have very exciting projects and shows lined up for the next year. But our long-term future plans are two fold — to become specialists in portraiture and to educate and expose Generation Y to art so that they understand, appreciate and eventually collect it. We aim to make people culturally aware by making art accessible.”