‘Why can’t I do it?’ Shila Ghosh on turning a road side entrepreneur after 80 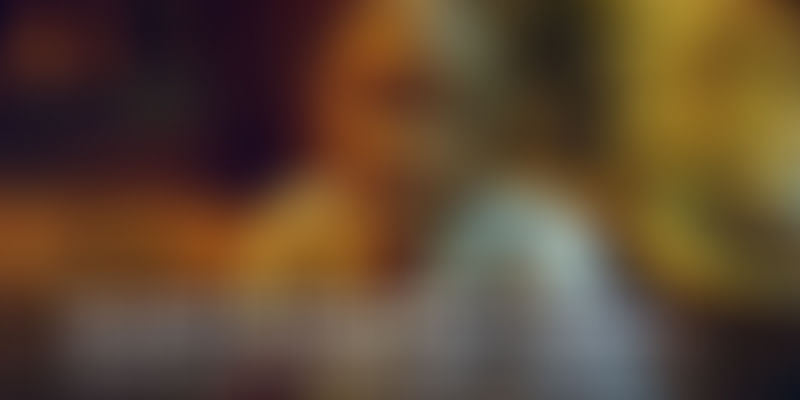 “Does she know how famous she is?” exclaimed the third person to stop by our table and interrupt our conversation. It was 4:30 PM on a weekday afternoon at the busy Excide crossing in Kolkata and 87-year-old Shila Ghosh had just finished setting up shop at her favourite spot, in front of the huge Haldiram outlet there, when we approached her for an interview. She complied with a toothless grin and began laboriously putting back her wares in a huge jute bag. As we escorted her to our table inside Haldiram, it soon became apparent that it would be impossible to conduct our conversation there. Hordes of people began to stop by and express effusive congratulations, admiration and gratitude. We knew she was a celebrity but had grossly underestimated the level of her fame and fandom.

I had first heard of Shila Ghosh when a friend shared her story on Facebook. Her son’s untimely death had forced the octogenarian grandmother to step out of her home for the first time in her life and earn a living on the streets to eke out a survival for herself and her family. It was one of those tremendously inspiring but overly simplified stories that are shared on social media for their virality. It was not hard to track her down because she sat exactly at the spot where the article had said she would. Given the level of noise and interruption at the restaurant we asked her if she would accompany us home for the interview, not really expecting her to say yes because we were veritable strangers. But she gulped down the laddoo that we had bought her, flashed that toothless smile again and said, “I will come if you reimburse me for today’s sales.” Given that she sells packets of unbranded fried snacks at dirt cheap prices, I eyed the few packets left in her bag and readily agreed. “This one’s going to fleece you,” my mother winked at me. “Hardly,” I retorted. “Its 30 bucks a packet and there aren’t many left. How much could she possibly charge?”

Upon reaching home and completing the ritual of the evening tea, I was about to launch into the conversation. But she got there first. “Let me sing for you the song I sang for my husband on our wedding night.” “Erm.. sure,” I said bewildered. “Ogo sundoro…,” (O beautiful one) she crooned. “It’s beautiful,” I told her when she was done. “Did you write it?” “No,” she said looking at me with gentle contempt. “Rabindranath Tagore did.”

I asked her if her music had had the desired effect on her husband. “Well yes,” she blushed. “He liked my singing very much.” Shila was born to a doctor father and a homemaker mother in the village of Bishnupur in Bengal. The eldest of seven children she does not know the exact year of her birth, but insists she is 87. “I was a tomboy,” she recalls wistfully. “I loved swimming. The moment we returned from school I would throw my books on the bed and go jump in the lake. In the evenings I had to pick the white hairs from my mother’s head. As soon as I could complete this odious task, I would go climb the jamun trees and not come down till dinner time,” she remembers. “Villagers are superstitious about going near trees after dark. My mother would constantly warn me not to go climbing, but I never listened. Then one day she took me aside and told me about the ghost that lived up in the jamun tree. I never climbed the dratted thing again.”

Shila loved learning but could only study till the third standard. “The village school didn’t go any higher than that. My brothers were sent to school in the city. When they came back, I would grab their books and read what they had learned that day.” Given that her father was a man of science, didn’t he harbour any progressive views about women’s education? “In those days this was the norm. Girls were discouraged from studying. I was lucky I stayed in school for as long as I did,” she reflects. While the brothers went to secondary and then high school, the sisters began to be married off one by one. Being the eldest, Shila’s turn came first.

“I was married when I was 14 and had my first child, a daughter at 15. My son was born the next year, followed by two more daughters,” she says. Though she was still a child, her childhood was effectively over. Gone were the days when she could roam about swimming, climbing trees and reading books. “The in-laws place was a strict one. I had to keep my face covered at all times. Going out of the house was unthinkable, I would be scolded if I just stood by the window looking out.”

Her father-in-law was a rail employee as was her husband. Though she was not allowed to step out of the house on her own, she travelled the length and breadth of the country with her husband who received attractive travel subsidiaries as a perk of his job. “I love travelling,” she says excitedly. “I have been to Puri, Bhubaneshwar, Delhi, Agra, Mathura, Vrindavan, Kanyakumari, Madurai, Pondicherry and many many more. I have worked the midnight queue at Tirupati,” she says. When her husband passed away her wanderings naturally ceased.

Shila thereafter focused on being a good mother. She was determined to educate her son and daughters equally, but life had other plans. Her eldest daughter passed away when she was in class 9. Her youngest daughter suffers from mental disability and couldn’t study much. “My middle daughter made it to the second year of university, but soon contracted an infection which rendered her mute and she dropped out. When she healed I tried to admit her again. After attending a week of classes she contracted the same infection yet again. This time I gave up.”

She focused her aspirations on her son instead who went on to become, like his father and grandfather, a rail employee. “We were never really rich but my husband’s family was decently middle-class and we never wanted for anything.” All that changed when her son was diagnosed with a terminal lung disease in 1993. “They stopped paying his salary. We had no way to put food on the table or pay for his treatment. I started taking loans to be able to afford the medical expenses. First they would pump 3 to 4 litres of water out of his lungs. Then it was 7 litres. The day they pumped 11 litres of water, he developed an infection. The next day he died. He was only 47.”

“For 13 long years my son suffered, bed ridden,” she continues. “After his death we were faced with huge loans and no source of income whatsoever.” So Shila, with her preliminary education and no experience of dealing with the outside world whatsoever, set out to support her family. “At first we would make candles and sell them by the Ganges. My grandson would buy the raw materials and my daughter in law and I would spend hours crafting different shapes out of the wax. And they sold like hot cakes too,” she beams proudly. “But the production cost was too high. Once we were done paying for the wax and other raw materials, the measure of profit was minuscule.”It was her grandson’s idea to peddle papads and others crispies. One wonders why it’s not her strapping grandson but the frail Shila who has to do the peddling. “Well my grandson, he’s no good at selling. He would leave home in the morning with a bag full of goods and return home in the evening with not a single packet sold. So I told him that you let me do this. People see a cute old lady and they can’t resist buying from me,” she chuckles. Shila maybe a proud woman, but she is a savvy businesswoman too. She refuses when people offer her money outright, but she has no qualms about using the charms at her disposal to earn money. This fact I learned the hard way when she demanded 1200 bucks from us.

“Do you mean to say that you earn 1200 a day?” I gasped. “That would mean you earn well over 30 grand a month! How much profit do you make from your business after you have recouped your investment?” “I am an old lady and can’t do so much maths. I only know that I earn 1200 bucks a day and that is what you owe me,” she told us impishly.

Shila needs cataract surgery urgently, but cannot afford it. Even though her body is practically bent double and she can barely walk without assistance, Shila commutes three hours every day by bus to reach the Excide crossing. The traffic policeman, Haldiram employees and the regular travellers dote on her and help her cross the road and put her on the bus. She never misses a day or lets the smile slip from her face and happily chats with customers, even those who stop to look but don’t buy. Questions about her ability and stamina at her age genuinely baffle her. “Why can’t I do it?” she asks puzzled.

On being asked the secret behind her infallible charm and steely grit she says, “My advice is to follow no advice. Any advice-be it good or bad- is irrelevant. I do what I do because I have no other choice. But the more I do it, the better I get at it.” As she cheerily bid us adieu and extracted a promise to visit her home soon, I reflected that 1200 bucks was a throwaway price to enjoy an evening in her priceless company.

If you enjoyed reading Shila’s story and would like to help her get her cataract surgery, please consider making a small contribution here. Every bit counts.