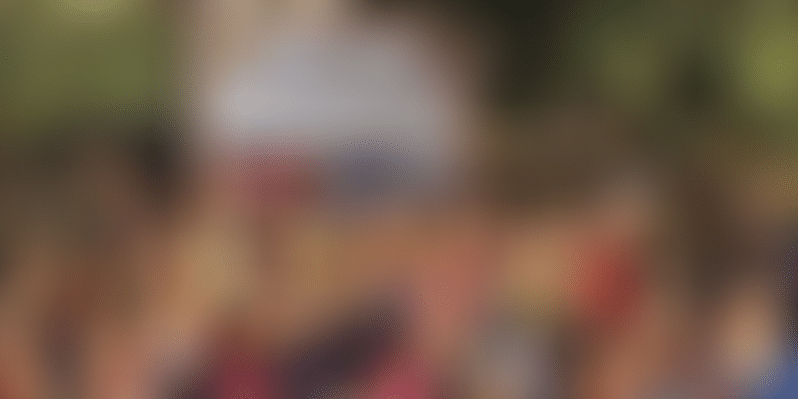 A postgraduate from Warwick Business School, Shreya Soni was living the good life. She was working at the European HQ of Ernst and Young in London as a Management Consultant.

Those years were fantastic in terms of work, life, friends, culture, food, etc., but I could feel the itch to move back to the mothership and start a project that had an impact on the grass-root levels and in some way or form contribute back to India.

Bonding with the children at the signal

She took the same route to work every day and would often find children knocking at her car window for money. Shreya adds, “As a family rule, we rarely give money to these children but our cars are always stocked with biscuits and clothes to donate.” She would see the children every day at the signal. The children quickly understood that she won’t give money to them, but would be more than happy to share her breakfast/lunch/snack with them. “Over a course of months, we built a relationship where we would banter about our respective days, swap stories, and food.” During this interaction, the children taught Shreya how to count to 30 in Hindi and she taught them the English alphabets. She saw a bigger impact, “I felt that their teaching me something left them very empowered and inspired.”Didi, we’ve never seen a movie

Seeing Delhi after five years, Shreya observed an explosion in the art and entertainment scene in the city with some fantastic music, theatre, comedy, and art events that were targeted to a slightly more privileged community. Shreya comments,

To me this seemed odd, as the group that needs a break, a laugh, a smile most are the kids on our streets. Their reality is so far removed from ours, and I wanted to give back to my friends on the street. I interact with these kids everyday by 40 second chats, sharing my food, donating clothes; but I thought something more had to be done for them!

One evening, Shreya happened to meet her group of children on the way for a movie. They asked Shreya where she was heading. Their response to Shreya’s answer was that they had never seen a movie. Awestruck, Shreya couldn’t shake the feeling off. Shreya says,

This sentence of theirs stayed with me for weeks and it truly bothered me that in a city like Delhi where entertainment and arts are bursting at its seams, these kids had such minimal access to the cultural diaspora.

Shreya could have taken the kids to a movie theatre but she didn’t want to take these kids out of their environment and shock them. She says, “I decided to act on this and as an experiment decided to bring the movies to these children, if they couldn’t go there.” The idea was to show these children an off-beat movie (Iqbal) and prod them to list their take and learnings from the movie.What started as an experiment is now a two-year old non-profit organization, Picture Wala, a skill and slum development non-profit organization that engages with street and slum kids in India. Picture Wala works with the children from Andrews Ganj slum in Delhi.

The mission is to get disadvantaged children within the folds of culture and meaningful entertainment through the skill building workshops. Shreya adds,

The workshops are effective tools and mediums for education, soft-skill development, awareness, and inspiration. Our aim is to entertain, connect, and inspire creativity and a sense of community through different creative learning experiences.

These workshops usually conducted once a fortnight, through a range of mediums – cinema, art, dance, sports, photography, self-defence, craft, music, theatre, etc. The end goal is to broaden their thought horizon and get them to think creatively and encouraging them to voice their thoughts into constructive action.

With every progressive Picture Wala skill building workshop, the number of children has steadily increased and they now interact with an average of 75 children per Picture Wala workshop. Shreya says that the response has been inspiring, generous, and mind blowing! Shreya says, “With each workshop, their skill set keeps widening and progressing. We measure and track progress of their softer skills and learning ability and have witnessed a dramatic increase in their levels of confidence, public speaking, articulation abilities, and curiosity to learn! It is wonderful to see their perspective on things and it is an equal learning for the volunteers as is it for the children.”

Sometimes children express about domestic violence, harassment through some medium during a workshop. Volunteers are trained to keep an eye out for such instances. Children in need, are connected to counsellors.

Children are not the only one’s impacted by Picture Wala. Through Picture Wala, Shreya aim to encourage city dwellers to volunteer and give back to the society they take from.

A change in parent’s attitude

Shreya recalls the amount of coaxing and pleading it took to convince parents to send the children for the first movie she screened. Shreya recalls, “Parents were the challenge. They didn’t see the benefit of sending their kids away for three hours where they could instead earn some money via begging. For them, the opportunity cost was immense.”

And now Shreya is called ‘Picture Wala’ in the slum by the parents. If the PW team is late by a week for a workshop, the parents now ask why they didn’t make it.

Today, we are greeted with cheers in the slum and parents look forward to the next PW event their kids will attend and learn from. It’s heart-warming to get their support and they tell us how they see a change in their children because of these workshops.

Recently, the team took the slum children to the museum. Shreya says that not just the children but the parents were also excited. The team has built so much trust that the parents didn’t even ask for Shreya or any volunteers contact details.

Picture Wala is a personally funded project and open to sponsorships and grants. They’ve had an overwhelming response from corporates and volunteers who volunteer and sponsor meals for every workshop. Picture Wala regularly partners with organizations like Book My Show, Book A Smile, Stic, and Delhi Police for the different workshops. Shreya says that there are many more collaborations in the pipeline.

What’s in it for her?

Shreya has a full-time job as a Management Consultant and works with organizations on process optimization, helping them manage their changing processes and streamlining the organization. She comments on how she takes time out for Picture Wala, “I believe if you have a strong passion and conviction in projects that resonate with you, you carve paths to juggle multiple projects. As a person, I am much organized and I am comfortable with multitasking, hence working on these two full-time roles is very exciting and satisfying for me.”

I feel with volunteering, the volunteer takes back more than the person receiving support. It is an extremely grounding and humbling experience that everyone must engage in on a continual ongoing basis. Things get manic hectic on my end as I have two hectic jobs at once, but the sparkle in the eyes of the Picture Wala children encourage and inspire me to learn how to manage my time better and keep going.

Shreya gets regular requests from around the country to hold Picture Wala skill-building workshops. They have piloted in Mumbai and will soon be heading to different cities of the country. Shreya says that the dream for Picture Wala is that every neighbourhood, town, and city has their own Picture Wala chapter for their neighbouring local slums.

On a parting note, she says,

I envisage every disadvantaged child to be under the guidance of a Picture Wala club around the country. There are over 80,000 children on the streets in the capital and there are growing concerns of these children no longer having a way to discover culture. Alongside economic poverty, we are witnessing the challenge of cultural poverty. To tackle this growing issue, Picture Wala aims to engage with children on our streets and bring them back within the folds of the cultural fabric of our society.