After Ola and Uber, ZipGo looks to bring in the next level of disruption in city commute 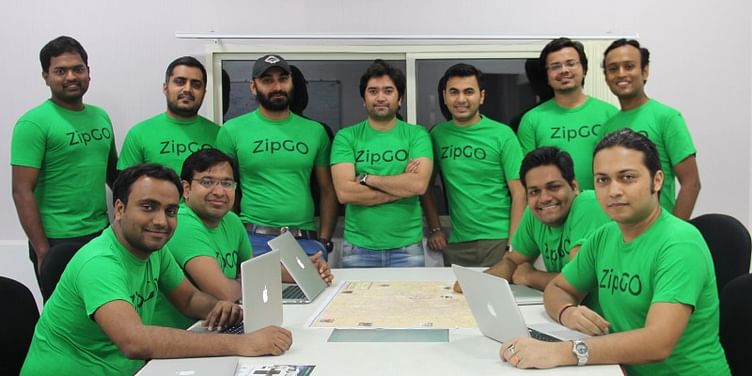 While Ola and Uber are fighting the battle to take the bigger share of the cab aggregation market, ZipGo, the city's new buzz is looking to approach the problem of commuting in Bengaluru differently. ZipGo is an app that aggregates shuttle AC bus services for just Rs 29. It is looking to solve the city’s deteriorating traffic situation and at the same time provide a comfortable and convenient public transport.

It is founded by four founders. Jitender Sharma and Gaurav Agarwal were in the founding team of TaxiPixi. Neeraj Paliwal, an IIT Delhi alumni was working at Kiwi and Pritesh Gupta comes in from his stint at Ola and TinyOwl.

In 2011, Benguluru was ranked the sixth worst city in the country when it came to the traffic situation. "When I first came to this city in 2000, the traffic on 100 Feet Road in Koramangala was far less than what it is now,” says Jitender Sharma, Co-founder of ZipGo.

This isn't Jitender or Gaurav's first foray into entrepreneurship, or in the commuting and aggregation space. Both Jitender and Gaurav were the Co-founders of TaxiPixi. Started in May 2013, TaxiPixi had signed up close to 2000 drivers in Delhi within a year. "At that point in time, Ola and TFS were just beginning as well. It was looking at solving the problem of commute with comfort and convenience. If you remember, the cost of a taxi was staggeringly high. With several players like us, the prices dropped," says Jitender.

He adds that initially when they went to investors with a mobile-only app, many believed that such a model would not work in India. They felt that in India a driver wouldn't buy a smartphone. Today, the scenario is different. The taxi market is more or less a tamed beast; it's easier to get a cab in a short time frame.

Jitender says that after that they began looking at the space of commute and transportation a little differently. According to him, while the taxi market addressed one portion of the market, a large portion of the daily commuters’ woes was not solved.

We are looking to build a smart mass transport system. We saw that people in New York, Singapore, and London were using buses for their transportation, so why couldn't we look at the same," says Jitender.

Taxis, he adds, are expensive even if you take the subsidised costs into account. Commuting using taxis twice in a day can be expensive. So if you look at a price point that's convenient for most commuters it is buses.

Explaining why buses were chosen by ZipGo, Jitender says,

Even if buses are available, people aren't using them. This is because of the lack of convenience. The experience, quality and timings aren't consistent.

Looking at the increasing traffic congestion in the past 10 years, the team saw the most urgent need of this service in Bengaluru. The infrastructure in the city, Jitender says, hasn't kept up with the speed at which the city is growing. Also culturally, he believes, Bengaluru as a market is more open to travel in buses. Jitender adds that they are also more sensitive to issues of pollution, traffic congestion, and others.

Following an aggregator model, the ZipGo team meets the vendors, explains the system to them and on boards the drivers. Jitender says that looking at the way the taxi cab business has flourished with the use of technology, the bus services are open to this idea.

The app uses Google maps as its base, but the technical team is creating its own maps in the backend. For the bus shuttle service, the map system needs more intelligence than just giving an idea of what areas will have traffic, it doesn't give real time assessment of the amount of time that will be taken.

ZipGo app uses the information given by the buses and generates information on what the actual traffic congestion situations will be and the amount of time it will take. ZipGo claims to have all government compliances and regulations in place. To be a part of ZipGo, an individual has to be a member, thus giving it the similar compliances as a car-pooling model.

Once the team decides on a route they look to operate in, they figure out the population density and demographics of the region and internet penetration. The first route- Banashankari to Koramangala, was launched in August this year. After this the team decides on the different stops that can be created for the service, which again works on the study done. Then the frequency is decided upon.

On launching the app, it asks you what route you would like to take, after which, the app shows all the buses that are available on that particular route. It shows the number of seats available on the bus, you can reserve your seats and it also shows the ETA for pick and drop. The app also shows tracking of the bus and the route it takes. ZipGo is currently integrated with Paytm, however, they're looking at other wallets as well.

While the team members of ZipGo had experience in the taxi aggregation space, they believe that shuttle buses are a different ball game altogether. "You need to work with multiple points of contact, multiple pickup points and destinations," adds Jitender. He believes that ZipGo has leveraged on their two years of work and efforts they put into TaxiPixi.

Setting a benchmark for quality drivers

Since ZipGo follows an aggregator model, they are particular about the quality and personality of the driver, who drives their shuttles. Apart from the basic hygiene checks of background, documentation and police verification, the work histories of the drivers are monitored and they even go through a five-step verification and interview process. The drivers are trained on etiquette, behaviour, and checks are made on the basis of the same. "We also have a zero tolerance policy to even the slightest indication of misbehaviour," says Jitender.

He adds that the drivers are treated well and considered an important part of ZipGo, which makes them stick with the organisation.

Jitender says while hiring for startups it's important to get people who're passionate and truly believe in the idea and what it stands for. ZipGo, he adds, is about making urban commute easier and faster. "When we landed in Bengaluru on the 22nd of July, we were a team of four people, today we have 25 people," adds Jitender. The team consists of ex-MuSigma, ex-Flipkart, and other TaxiPixi employees.

It's an India specific problem, and people to see this as the kind of problem they want to solve.

Working at a startup means learning new things every day, challenging things and creating new benchmarks. And you need passion and belief for that. People should want change and make things better," says Jitender.

He adds that today people look at startups as a quick money making machine. This, he feels, is not the right attitude working in a startup means you need to put in a lot of effort and hard work.

You can't build your strategy based on what the competition does

Currently, Jitender says that ZipGo is growing at 10 to 15 per cent within a day. Explaining this, Jitender says that every evening the rides are higher than the morning rides and the next day morning rides are higher than the previous evening rides. "This is a unique situation and indication that people are validating the idea of ZipGo," adds Jitender. The app has had over 10,000 downloads.

Speaking of the increasing competition in the space, Jitender says that they do what they believe would work. "It's important to have focus on what you have in your business before looking at the competition. You need to solve a problem you set out to solve and let the competition focus on their job," says Jitender.