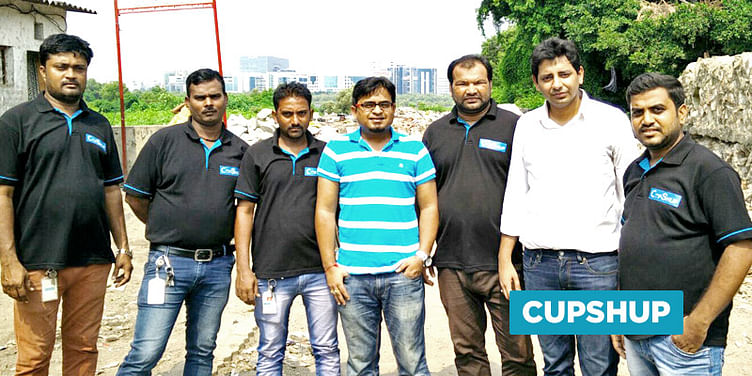 The most effective kind of advertising is indisputably the kind that is not bellowing at you for attention with a psychedelic LED display or a 3D water-slide jiggling out of it. Reverse psychology bares its fangs, as consumers have nowadays attuned themselves to completely block out anything begging to get noticed. What has been proven instead, is that consumers get the most persuaded by advertisements which are subtle, understated, and at places where they least expect them. At such unconventional, ‘virgin’ environments, the plug is temporarily pulled on that filter that is constantly weeding out marketing noise, thus allowing unanticipated branding messages to make their impression.

Sidharth Singh from Muzaffarpur and Sanil Jain hailing from Bhopal’s problem-solving days go way back to Chennai, when they would study together for their MBA entrances. After they managed to crack the NMIMS MBA entrance, they saw the above phenomenon playing out to perfection while sipping on a cutting chai during their course.

“Tea is special to Indians and a significant amount of discussion transpires over cups of tea every day. I was having a cup of tea with friends at our usual road-side tapri (corner-shop), where we chatted about movies and politics. I realised that we just spent 15 minutes of our quality time which was relaxed, clutter-free, and fun-filled. This is an ideal situation where a brand could promote itself. And thus the idea dawned on me that if we brand the tea cups as well as tea stalls, we could convert the tea stalls into discussion joints,” explains Sidharth.

In their last trimester, he opted for a course in entrepreneurship, started working on the CupShup idea and decided to do a little market survey in the form of a social experiment.

“Since it was very difficult to get a small number of cups custom-printed, I bought 100 cups, pasted stickers on them – with a hypothetical brand and an offer – and distributed it to my nearby tapriwaalas. I also designed some questions related to that creative and interviewed people after they finished the tea. The result of product validation survey was fantastic. Almost all of the people I talked to were able to recall the brand and the offer on the cup when aided, in spite of it being a fabricated one. Thus, I established that this idea has the potential and brands will be attracted towards this unique method of promotion.”

The adda over a cup of tea is random banter about everything between civic issues and the apocalypse. As you can see, the window is as big as the universe itself, and more often than not, what people see around them acts as fodder to this small talk. Curating and channelising these discussions, was the idea that he shared with his long-time buddy Sanil Jain, an ex-Amazon employee. He was instantly sold at the concept, and CupShup was in business!

“Our unique concept is not only saving on significant cost for the tea vendor, but is also doing away with the cheap not-so-healthy plastic cups by providing a comfortable-to-hold, recyclable designer tea cup to the customer. We only use top quality food grade ink and bio-degradable recyclable paper. This allayed the concerns of corporate parks, and helped us gain access to office cubicles,” he adds.

While ads on TV and radio are almost always flipped over by the customer, advertising over paper tea cups is bound to make an impression in their mind. This medium is as effectual as it is crude, provides a five to seven minute long exposure and triggers conversations over tea-breaks which are organic, hence making deeper impressions in customers’ minds.

CupShup now has a strong distribution network of 1,000 offices, more than 400 colleges, and over 2,000 retail tea vendors across seven cities of India – namely Mumbai, Pune, Bangalore, Hyderabad, Delhi, Noida, and Gurgaon. They have also categorised tea vendors on the basis of nearby point of interest, viz, IT parks, manufacturing hubs, colleges, etc., to target with optimum efficacy.

“Our unique model is helping brands in gaining access to cubicles and classroom of offices and colleges, respectively,” says Sidharth.

When the cuttings stopped cutting it too close

The two hadn’t left their nests in the initial phase of CupShup, so balancing their corporate life and entrepreneurship meant working nine to six for our job and then six till post-midnight for CupShup.

All this, while brainstorming their one major hurdle – mapping. “To map the entire city so that we can come up with right set of tea vendors for our clients was the biggest snag. A tea stall was frequented by different types of people, depending on what kind of buildings it was around. So, a tea vendor outside an IT park will appeal to a brand looking to target working techies, while a tea vendor outside colleges will appeal to brands targeting students. We mapped the tea vendors along with their nearby point of interest, viz, IT parks, manufacturing spaces, colleges, etc. Mapping the entire city was tough, so we built our own app which captures the location of tea vendor based on its Geo Location.”

Another contention that brands would potentially have is the cups with their branding being disposed in a haphazard manner, adding to the menace of littering. “We decided to supply brand new dustbins to all our tea vendors. This not only helped us in addressing the concern of littering but also helped tea vendors in keeping their stall clean as people used our dustbins to dispose the used cups,” says Sidharth.

CupShup delivers on a daily basis to ensure that cups do not get misused, and that there is no wastage. For that, they have a centralised godown in each of the cities they operate in. Recently, they tied up with two leading airlines of the country for in-flight promotions on their cups.

Since they first started out in November 2014 with their pilot campaign, they have associated with big names like Coca-cola, Snapdeal, Finolex, Kotak Securities, ICICI Prudential, Viacom 18, Ola Cabs, Oyo rooms, Urbanclap, Truly Madly, Swiggy, Tinyowl, Babajob. Having touched Rs 70 lakh in revenue, while achieving a monthly run rate of 15 lakhs, as of the last quarter, the bootstrapped company turned profitable.