Founder of three startups in three years, Arpita Khadria is just getting started at 33 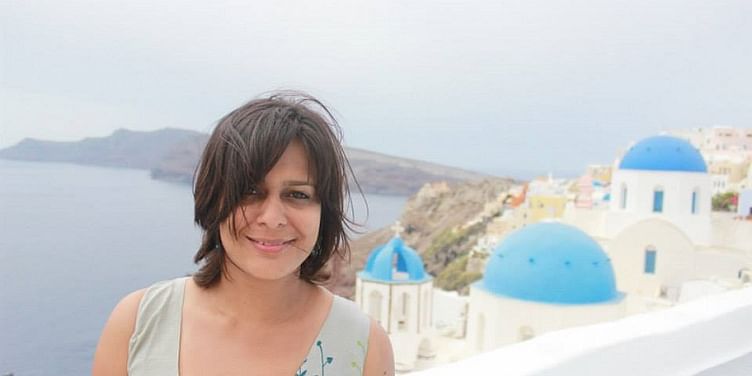 Just four years ago, Arpita Khadria was working as brand manager with a leading company. With an MBA from TAPMI and associations with brands like Fastrack and Titan, she was set to scale the corporate ladder. Today, at 33, she is the founder of three different startups. “Life is funny. When you start on a journey, you cannot predict where you will reach,” reflects Arpita. She is very excited right now, as her app Signtist has been chosen to represent India at the Mobile Premier Awards. At a competition held by global app showcase platform Appcircus, and sponsored by Intel, Signtist edged out other competitors to win the chance to represent India at the Awards show in Barcelona at the end of the month.

Signtist, which was developed at Arpita’s game and app development company Bezzerk, is a game based on logical reasoning. She hit upon the idea for Signtist while using her old T9 phone. Since the keypad has to be pressed multiple times to get to the right letter, she wondered if the reverse – that is guessing the word from the pattern of the keys could be a game. She filed for copyrights in 135 countries and was thrilled when it came through!

She launched the game in the market initially as puzzle books on Flipkart in April 2015. The puzzle books received an overwhelming response and without any kind of marketing and advertising, she has been able to sell Rs 1.5 lakhs worth of books. Arpita noticed that she got an average of 80 per cent sales conversion at various events where they set up stalls.The Android version of the app was launched in December 2015 and the iOS version in January 2016. Arpita says, “The game can even be used as part of logical aptitude tests for student. The possibilities are endless.” She is in talks with different newspapers to feature the game as a crossword, and is excited that Signtist has been shortlisted by the Facebook Start Bootstrap track programme, where the winner gets perks worth $30,000 and mentoring.

Bezzerk is a four-member team, with an in-house designer. Signtist currently has a rating of 4.6 on Android and is featured in 12 countries by Apple under best new games. The game has seen 25,000 downloads already. Signtist found an advertiser in Mentos India due to the match with the tagline “Dimaag ki batti jala de”. Advertising and marketing comes naturally to Arpita, who started her career at top ad agency McCann Erickson.

In 2012, Arpita decided to quit her job due to the combination of an unsupportive boss and a stressful work environment. A true blue Marwari, business is in her blood and with the support of her husband Promit and friends, she decided it was time to embark on a new journey.

After all, when you hit rock bottom, the only way is up,

she says with a rueful smile. Arpita’s first venture Barefoot was set up in September 2012 and was named so, as it symbolised a back-to-basics for her, a new start on her career path.

Barefoot is a brand consultancy firm for startups. It is the big brands who can afford to hire big agencies or have their own marketing and branding team. But new firms struggle with things like brand launches, market research, or even generating leads. Barefoot provides consultation services at very affordable prices, which works out cheaper than hiring an in-house team or a big agency. Arpita is also very particular about restricting the number of clients to five to six at a time so that they are not overwhelmed with work and are able to give focussed attention to each client. Barefoot’s client portfolio, be it Arya Farm, Assetz group or Lovetreats, represent various industries and they have helped clients at various stages of the product cycle. She has a four-member team at Barefoot, with around 15 freelancers handling the design requirements.

Arpita is very particular about work-life balance and dissuades her team from working on weekends. She enjoys travelling and her vacation diaries have been beautifully recorded on her travel blog. She has also launched a not-for-profit startup called Give Freely in January 2016. “Usually NGOs and charitable organisations ask for money and donors are wary of the cash being misused by management,” explains Arpita. So Arpita came up with the idea of a platform where NGOs can display their requirements in kind, say furniture or 20 kg of rice, and the donor can make the donation in kind. She, along with her team, personally vetted all the NGOs on the web platform before including them. In case of calamities. like the recent floods in Chennai, there are a lot of people in need and a lot of other people who want to help. Give Freely hopes to liaise between the two and help those in need at short notice and with minimum wastage. The platform is sustained by her personal savings and Arpita hopes that big organisations will associate with the charitable startup as part of their CSR (Corporate Social Responsibility) programme.

A big admirer of Richard Branson, Arpita feels she is just getting started and wants to be known as a serial entrepreneur. The philosophy she lives by is ‘think big, start small, act now.’ By starting small and having patience, she was able to avoid making mistakes that are often the result of impulsive leaps. She feels that though monetary success is important, what is even more important is doing the right thing. She places huge value on relationships, be it with employees, vendors or clients and has found that success has followed organically. There were times when she was tempted to sign up with big organisations for Barefoot, but she realised that would not be true to their ethos of working with and mentoring startups. Arpita feels that staying true to one’s values and avoiding all shortcuts is the mantra for success.