Hire to fire or fire to hire? 3 key lessons 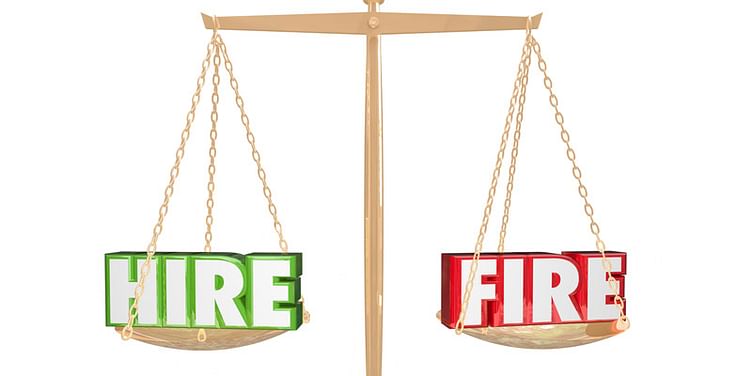 People are a strong part of any organisation. Every company’s strength can be measured based on the people who are a part of it. But managing people is one of the most dreaded jobs of an entrepreneur.

In fact, once you move ahead in your entrepreneurial journey, a major part of what you would do is people management. For years, companies have been working on some of the most effective ways to manage their people.

People are also important because they are directly linked to the culture a company wants to set. Most leaders want to make sure that the culture in their company is nothing more than their mere reflection.

However, a true leader understands the difference between reflection and extension. This extension is nothing but the void that he strives to fill by hiring people who can complement his strengths and his weaknesses. In such a case, the company culture begins with the leader.

But it doesn’t end there. It ends at the people who are a part of the leader’s clan. Having spent my initial years in some of the biggest corporate companies, I was always aspiring to be different in terms of a culture that I’d set up in my own company. The whole idea of creating a hierarchy was not something I was inclined towards. Though I was fortunate to work with some great managers I still can’t forget the ones that made my life miserable.

And that’s exactly why I was clear from the beginning of my journey that we will create a flat-structured organisation. There will be no managers. This, we thought, will give rise to a great sense of freedom in those who’d be working with us.

Another thought that always kept me against a hierarchical organisation was the fact that it reflects distrust. There are obviously a lot more aspects of a management that reflect distrust, but the idea was to keep it as minimal as possible. And that’s because at the end of the day, a leader's job is to safeguard his organisation as well.

Sometimes, this could be even at the cost of coming across as unapologetic. But that’s the price every leader has to pay. And only we know how difficult it is to make a decision that revolves around people.

What happens in a company is mostly a rippling effect. Things are so damn inter-linked that sometimes it takes years for us to realise that. One such episode that we witnessed was one of the greatest learning experiences so far.

We learnt three key lessons through this episode. The beginning of 2016 seemed to be overshadowing every single achievement of the previous year. We were suddenly witnessing trends that we had not seen before. Initially, we ignored them. But soon, we realised that there was more to this than meets the eye.

Somewhere in the middle of February 2016, we realised that the number of people who left the organisation or were fired exceeded normalcy by leaps and bounds. Our team size was suddenly reduced by a good 85 percent; most went absconding, a few were fired on disciplinary grounds. And for a small-sized company, that’s like death.

But then all this happened despite the fact that we were hiring in quick succession as well. But something was terribly wrong. On introspection we began reading some patterns. We began analysing the ones who left. There were quite a few similarities between them; from their educational qualification to salary bracket, from their IQ to their zeal and approach towards their job.

Here are the three key lessons we learned:

Hiring needs to align with the company structure:

A flat-structured organisation is a Western concept. And even in the Western countries, only a handful of companies, like the online retailer Zappos, have been able to move in this direction. Though a lot of companies are in the process of de-layering, only time will tell if they will be able to achieve greater results or not.

Aspiring to build a flat-structured organisation is great. But one needs to realise that a structure of this nature needs people who are good at self-monitoring. And that’s the first quality that one has to look for, when trying to build a flat structure. Unfortunately, we didn’t explore this dimension in our hiring process. So, there was a huge gap between our aspiration and the reality.

Hiring can never be an act of desperation:

So, on one hand, we were working on a challenging structure, and on the other, we were losing people in the process. The issue was that in a structure like this, when people are not competent enough to embrace self-monitoring, it takes a toll on the quality and productivity.

It then leads to either people choosing to part ways, or the management asking them to leave. In both cases, there’s a void that’s created; it’s called a vacant position. For a small business, a vacant position is a monstrous term. And that’s exactly what happened with us. In order to fix this situation, we began hiring with a lot of desperation.

The ones who joined as replacements left even quicker. Soon the vacant number began to rise. In fact, it led to a much bigger damage. The damage became so big that 'back to square one' sounded like an understatement.

Hiring should never be a reaction:

Like most small businesses, we focussed on hiring only when someone left the company or we had a sudden increase in business. But that’s a suicidal way of looking at hiring. Hiring can never be a reaction to a particular situation. It has to be a pro-active, planned and structured effort.

Hiring is directly related to some of the most important aspects of a company – from setting up a company culture to aspiring for a coveted award, from diversification to scaling up. Every aspect of a company is related to the kind of people it gets on board. And this is not limited to evaluating their skills only. It extends to decoding their personality and being able to understand if they will be a cultural fit or not. Today, we focus on the personality aspect so much that it supersedes skills.

My journey would have been incomplete without episodes like this. Though they are strenuous, they do come with their share of unmatched lessons. These episodes don’t just help me take a pause; they make me stronger too. They push me out of my comfort zone and bring to the fore some of my unexplored abilities. And like every experienced entrepreneur, I understand the invaluable contribution of these lessons in my journey.

The strange thing about entrepreneurship is not that we are unaware of these things; it’s just that sometimes when things are too close to us, they seem blurred. And a splash of cold water in the form of these episodes does the trick to give my vision that much-needed relief and clarity.