Defying all odds: The story of a maker school in Karnataka with no teachers 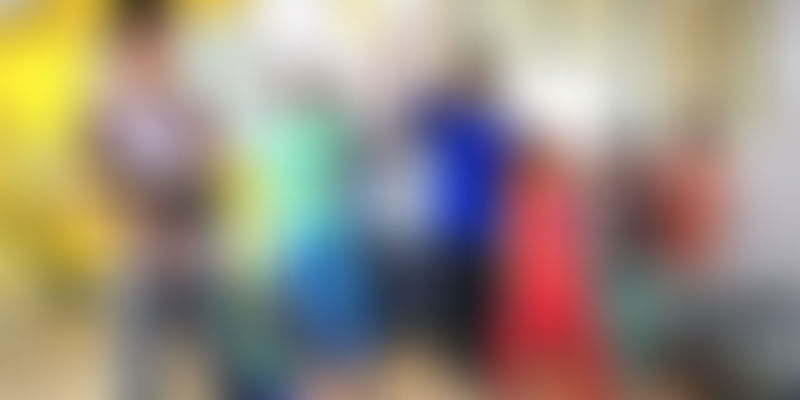 An hour away from the city of Bengaluru is Banjarapalya, a small village in Karnataka where Project DEFY (Design Education For You) began its first self-sustainable rural makerspace two years ago. Though it is essentially a school, the difference is that the makerspace has no teachers and runs entirely with the help of the Internet and local volunteers who make available resources that students can tinker with.

Inspired by Sugata Mitra’s famous ‘Hole in the wall’ initiative, this effort has galvanised the curious and aspiring rural young, many of whom have learned everything from how to use the Internet to building hi-tech products. The founding team (Abhijit Sinha, Megha Bhagat, Arvind Badrinarayan) made it a point not to run the makerspaces in schools as they believed a more independent space will help these students mix without any hierarchy, and teachers too would become learners.

Kushal Kumar, an early student at the DEFY makerspace, who now runs their space at Kaggalipura village, at the recent Crowd Product event in Hyderabad, shared the kind of things the students had built. These include various toys made from trash, Arduino boards, video-games, low-cost water-heaters, vegetable cutters, solar engines, LED flashers, security systems, and much more. Beyond the early builds, these makers are now keen to go up a notch and build products like RC electric cars, quadcopters and solutions around aquaponics.

What are DEFY’s plans for the year?

Project DEFY has several projects planned for this year, right from opening up more rural makerspaces and organising training programmes for community managers to developing a mobile truck with a full-fledged makerspace. The team is also exploring interests to start similar schools in countries such as Ghana, Uganda, and Kenya.

To realise some of these goals over the next six months, Project DEFY is running a crowdfunding campaign to raise Rs 5 lakh (approx. $7,350), and their goal is within touching distance.

How did it all begin?

I caught up with Project DEFY’s 24-year-old founder and director, Abhijit Sinha, to hear his story. Abhijit, born in Mumbai, went to a not-too-expensive school where rich and poor kids all studied together. His schooling days were his best, where teachers encouraged students to ask questions and to get out of the school to gain some real experience learning outside – through picnics, debates, quizzes and other extracurricular activities.

However, next came engineering college, which turned out to be a stark contrast to his early schooling and upbringing. Though there were over 15,000 students in the university, hardly anyone seemed to ask questions. According to him, they all were highly dependent and had to live with a host of restrictions and rules imposed on them. After what he calls a ‘boring stint’ Abhijit finally quit university on 31 December 2013.

Abhijit then moved to Banjarapalya village and began working with a social organisation. He was given some computers, and he set it up and asked the kids to play games on it. He would not tell them how those games were played. But soon enough, each of them figured how it was played. He realised that though these children never learnt the English language or how to use computers, their sheer motivation helped them learn new things and break learning barriers.

He soon brought in more tools to the space; hammers, hacksaws, screwdrivers, and LEDs, which he and the students repurposed to build cool things like robots and ball throwing machines for dogs. He also taught the students how to use the Internet to find interesting things on their own. It ended up becoming a little makerspace where the community got together to learn new things. He then tried another experiment to find out if the space could run on its own without his presence. To his satisfaction, the space continued running, and for over a year now it has been running with rural participants and no teacher present.

Project DEFY’s initiatives and growth plans are keen to prove to the world that there are alternatives to traditional schooling and that education does not stop with the lack of teaching staff. The team further aims to replicate and scale this model of “schools without teachers” across rural India, and other developing regions of the world as well. You can support Abhijit, by contributing to his crowdfunding efforts and by supporting the makerspaces. Stay tuned for more inspiring stories from rural India.