In Mumbai, Mirakle Couriers's 45 deaf employees are handling over 2,000 couriers a day! 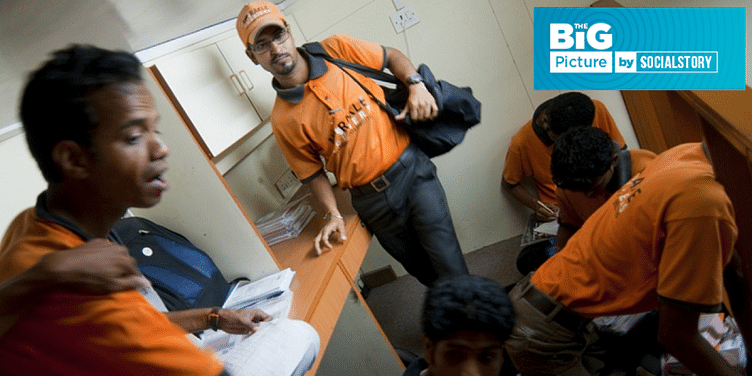 How often does one get a disruptive idea while travelling on a bus? An idea that can potentially transform the lives of a society, which for long has been excluded from the employable workforce. Not very often, and perhaps, that’s why Mirakle Couriers is a miracle for India’s deaf.

A glimpse in to India’s deaf

It’s a silent, invisible, and voiceless disability. According to the World Health Organization (WHO), hearing loss is the most widespread sensory deficit in humans globally, today. Closer home, in India, 6.3 per cent of our population or nearly 63 million people are diagnosed with extreme hearing impairment. Among children, four in every 1, 000 are victims of this. Entrenched in social stigma along with lack of political will, the deaf don’t have many avenues – whether its education or employment, and so this section of the society has inevitably been lagging behind.

According to Dhruv Lakra, Founder of Mirakle Couriers,

The main reason why this community hasn’t developed apart from the obvious social stigma is that sign language acceptance has been extremely low. While innovations have drastically improved for the visually impaired, there hasn’t been much progress for the deaf, with communication remaining the key challenge.

Dhruv grew up in Jammu, in a business family. After completing his B.Com, he joined Merrill Lynch’s investment banking division. Unhappy with his decision, it took him just about six months to realise that this wasn’t his calling. But it took him two years to quit and when he did, he plunged in to the social sector. He joined Dasra – a Mumbai-based philanthropic organisation as a Senior Analyst. One of his first assignments in Dasra was to spend around four months in the tsunami-hit areas of Tamil Nadu, an experience that opened Dhruv to the world of social problems. The next two years, he worked on multiple projects spanning health, education, disaster, women empowerment and income generation. Equipped with this experience, Dhruv was awarded the prestigious Skoll Foundation scholarship worth £45, 000 to pursue a Masters in Oxford University’s SAID School of Business.

It was here that the idea of Mirakle Couriers took birth. It was just another day and Dhruv was sitting in a bus next to a young, deaf boy who was looking restlessly outside the window. He was making sure he doesn’t miss his stop. When Dhruv and the boy exchanged a few notes, he realised the struggle they go through, every day. At home, he was pondering on his experience when the doorbell rang. It was a courier delivery – a simple, two-minute process that required no verbal communication. And once that realisation dawned upon him, there was no looking back, ever.

Mirakle Couriers is the bridge between the corporate and social world that is leveraging on the booming industry of logistics to create meaningful employment for the deaf.

Mirakle Couriers started with one deaf man and 10 shipments. Slowly, word spread around and Dhruv managed to bag his first big order of 5, 000. And then, another 5, 000. But there were hurdles, which Dhruv had to cross. He says, “For any logistics business to scale, it needs more and more clients. But, with Mirakle Couriers, that challenge has always been changing the perception of people that we can do our job well, and that we are like any good company.”

Another challenge, Dhruv faced was, “convincing parents to send their children to work for the first time.” He particularly remembers hiring Mirakle Courier’s first female employee, Reshma, and it was a hard thing to convince her parents. But, he eventually won.

From spending months understanding the culture of the deaf, learning Indian sign language, to convincing families to let their children work and companies to give orders, Dhruv has managed it all by himself, rather successfully. The awards the company has won are a testimony to what it has managed to achieve – Echoing Green Fellowship (2009), Hellen Keller Award (2009) and the National Award for the Empowerment of People with Disabilities (2010). But, it isn’t the accolades or the company’s success that keeps Dhruv going. He says,

The relationship between the parents and their children has evolved for the better- there’s more trust, confidence and a dream they have now.

Scaling up and way ahead

What started as an audacious dream with just one employee and ten shipments has today, grown to 45 employees who handle 2, 000 deliveries a day! His employees earn an average of Rs 10, 000 ever month along with perks such as PF and medical insurance. After successfully bootstrapping for seven years, Mirakle Couriers will now look for funding. They are ready to move out of Mumbai and expand to major cities – Delhi, Kolkata, Hyderabad, Chennai and Pune. In terms of their business model, Dhruv has started focusing on e-commerce and international shipments in a big way.

The challenges are still the same, but the opportunities are more. And if one were to look at what actually Mirakle Couriers achieved, as Dhruv rightly says,

We have planted the seed that people with disabilities can be incorporated in to the supply-chain model.

The seed will only grow.

13-year-old Prateek was born deaf; today he is a rising cricket player from Karnataka