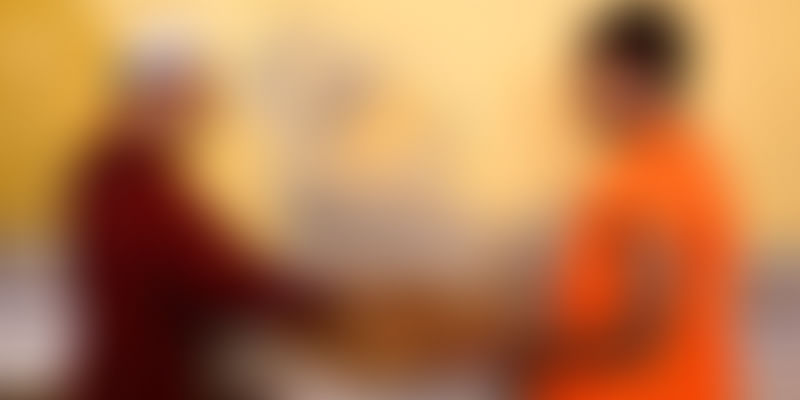 Every day during Ramzan, hundreds of Muslim men, women and children queue in front of a Buddhist monastery in the Bangladeshi capital to receive iftar, the food with which Muslims break their fast at sunset during the holy month, reported Al Jazeera.

The initiative by Dharmarajika Buddhist monastery to distribute food to poor and destitute Muslims is a rare example of social harmony between two groups from two different religions in a country that has witnessed a spate of fatal attacks against minorities and secular activists.

The Dharmarajika Buddhist monastery began this project six years ago, and monks say Ramadan is the best opportunity to help poor Muslims. The high priest of the temple, Shuddhanando Mohathero, who initiated the project, believes that “humanity is the ultimate goal of humans”.

Abul Basahr, a shopkeeper living in the area, told Al Jazeera that monks at the Buddhist temple engaged in several social welfare activities. “The best thing they are doing is the distribution of iftar food to the poor people,” he said.

Established in 1951 in Basabo area of Dhaka, the monastery, monk Karuna Bhikkhu says, works for harmony in the society. Karuna says it is an effort to build good relations with Muslim community, who form nearly 90 percent of the population. Buddhist comprise less than one percent of this nation of 160 million.

Harun Miah, the owner of a local restaurant, has been working with the monastery for past five years to cook iftar meals. He says the iftar consisting of potato chops, peyaju (onion tempura), beguni (eggplant tempura), chhola-boot (lentils), khejur (dates), muri (puffed rice), and jilapi (a sweet made of sugar syrup) are served in a box.

Buddhapriya Mahathero, the second-high priest of the monastery, said at least 300 poor people are served daily. “The people start making queues from 3pm onwards inside the monastery,” he told Al Jazeera. For people like Sakhina, who cannot afford an iftar, the free food at the monastery is a godsend gift. “Here, we are granted respect that we were supposed to get from our co-religists,” she told Al Jazeera.

Despite a recent spike in violence in the South Asian nation, the monks say they are not worried about their safety and have a very good relation with the Muslim community. Mahathero, a firm believer in inter-religious harmony said: “Why should there be a conflict? We are all Bangladeshis. This land is for all of us. By helping each other, we can make this country great.”