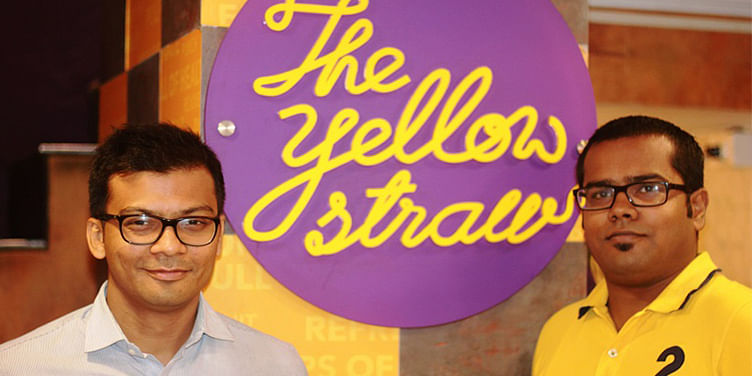 In a metropolitan city like Kolkata, the ever-growing fitness trend has become a rage. With calorie consciousness ruling diet plans, people are becoming increasingly aware of what they are eating. Getting some inspiration from the West, gone are those days of Mishti doi and rasgulla! The city, of late, has been spurring with newly opened cafés and healthy eat-out joints.

Grabbing the perfect opportunity at hand, city-based duo Vikram Khinwasara and Piyush Kankaria opened a chain of fresh-fruit juice centres ‑ The Yellow Straw ‑ in this booming juice industry of around Rs 1,100 crore.

Getting a head start of their juicy career

The Yellow Straw was Co-founded by brother-in-law duo Vikram and Piyush. Working at ING Mutual Funds for eight years, 36-year-old Vikram is a fitness freak. Piyush, on the other hand, is a foodie who comes from an IT background and was a software engineer by profession for a Bengaluru-based MNC firm named Keane.

The unexplored and unorganised juice business is untapped and has immense potential. Almost every part of the country has some regional juice parlours. We wanted to start a chain of good healthy juice centres and turn the city of chai-wallas to the city of juices," states Piyush who rejected an offsite job offer in Melbourne, only to take a chance in the F&B industry.

Their family initially had some apprehension because starting up definitely came with its own risks and losses. Having managed to convince them at large, the duo made sure they got their research right before they began.

They devoted around nine months just for the research and survey. Having travelled to Bengaluru, Mumbai, Delhi, Amritsar, and Ludhiana, they found out how the industry is shaping up and the best juicer makers in this market. Piyush even worked for six months at Subway to get some detailed insights. Once they raised enough capital and got thorough experience, they launched The Yellow Straw in May 2014.

Initially, people hesitated to pay Rs 50‑100 for a glass of juice, which was easily available for less than Rs 30 on the road.

We chose to open a fresh fruit juice bar because of the big void in the market and an equally large opportunity lying ahead in years to come. Juice is the new coffee/tea in India right now. There's some mind blowing and untapped potential in this field. Kolkata, being a price-sensitive city, was our first target. If we clicked in Kolkata, we knew we would click anywhere else in the country. We have a vision to be the most known juice bar chain pan India. Think of juice, think of The Yellow Straw. We aim to be the Jamba Juice of India," quips Piyush.

Rolling down the numbers

Combining a right blend of health and taste, the business is slowly unfolding to be a viable one. With 80 glasses per day to 800 glasses per day, and from two employees to around 21, their journey has been quite eventful in last two years. From a small 28 sqft shop amidst the most intellectual area of Kolkata – The Kolkata High Court, they have grown to five full blown outlets. Another outlet of theirs operates only on weekends and national holidays in the most prominent club of Kolkata ‑ The Tollygunge Club. These outlets are currently located at all the commercial and prime locations of the city like Sector V, Dalhousie Square, Rajarhat and inside the corporate canteen of a reputed firm Pricewaterhouse Coopers.

During the 2014-15 financial year, the company had an average monthly revenue of six lakhs. They are now targeting a revenue of one crore. They are currently witnessing a month-on-month growth of 15 percent, with a 25 percent overall growth. The company is currently bootstrapped. They have invested around Rs 45 lacs, which includes both their savings and certain funds from friends and families.

“Our growth hack is very simple, word of mouth. We see around 70 percent of repeat customers. We work on a B2C model selling our products through our retail outlets,” states Piyush.

Their core offerings include fresh juices, fruit shakes, fruit salads, fruit sundaes and light munches like toasties, and sandwiches. They claim to have 100 percent water-free juices, even for hard fruits like apple and guava. Using masticating juicers, the juices comprises of more than 90 percent of nutrients of fruits and they offer around 45 plus varieties of juices and shakes. The duo says,

We have faced a big challenge managing our raw materials. Since we deal with fresh fruits and veggies that are perishable items, a very strict QC is maintained across our supply chain. Man management of staffs is another challenge we have faced, training them and aligning them with our bigger vision.

The company did not have any profits for close to 1.5 years. Over the last six months, they have managed to slowly start making profits. They are planning to open four to five outlets in the current financial year and expand to other cities in the coming years.

An overview of the market

According to the Euromonitor International research, the fruit juice industry is said to grow by 115 percent in next four to five years, as compared to the 47 percent growth of the soft drinks industry.

Some of the big players in the market include startups like Juice Up that supplies fresh cold pressed juices. Launched in mid-November through food events, the Delhi-based company sold about 10,000 juices in December 2014 and now it is shipping about 15,000 juices a month. Bengaluru-based Juice Maker is also doing well for themselves with 125 per cent month-on-month growth.

Fresh juice accounts to 95 percent of the juice consumption in India, which is largely un-organised. Untapped places like schools, hospitals, corporate canteens are of tremendous potential and are currently thriving on packed juices or soda.