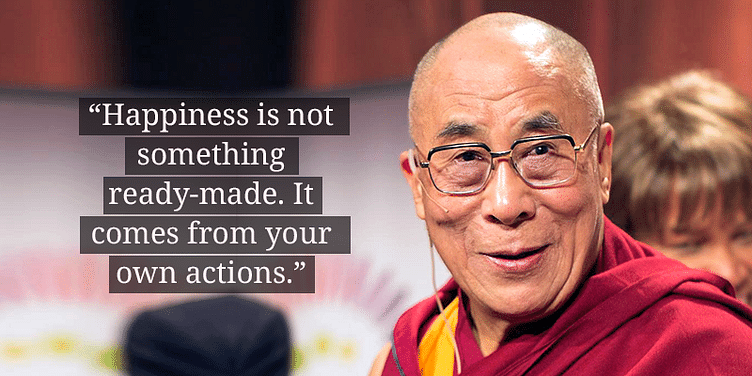 In this world of fluctuating happiness, fleeting relationships and seemingly endless problems, peace and serenity seem next to impossible. We are a society torn by divide. We battle for our greed and lick our wounds for our pride. We market our insecurities and use cynical shields to protect ourselves from falling. In an age where the world centres on the grey, it’s easy to give up on the light. But, like they say, when the clouds clear, we do get sunny skies. And sometimes, we just need a few people who make it their life’s mission to help raise the living out of this sloth and to remind us that we’re all here for a reason.

Today, we pay a tribute to one of the most revered and celebrated man in the world, Tenzin Gyatso, the 14th Dalai Lama. Tenzin, like his respected predecessors, had set camp in the sacred Tibet. But at the onset of the Tibetian uprising in 1959, he fled to India where he was granted refuge. Despite the fact that China soon declared war on India and demanded that he be asked to return, India, under Prime Minister Jawaharlal Nehru, refused to relent, and the Dalai Lama was thus stationed behind a safe fortress. Since then, he has made India his home, his current residence being at Dharamsala. The Dalai Lama has travelled the world to advise and inspire people on the sanctity of happiness in human life and the need for peace for a greater tomorrow.

The Dalai Lama is no ordinary man. Be it the spiritualists, the realists or the sceptics, everyone agrees that he is enlightened in the truest sense of the world. He sees and knows a world beyond our mortal realities and has oriented his life in the path of peace and righteousness.

In his honour, we would like to brighten up your day with some of his most famous and motivating quotes. We hope that they resonate somewhere within you and make you see the colour in all of the grey.

If you know of any other quotes by him which have inspired you to live better, please let us know in the comments below.