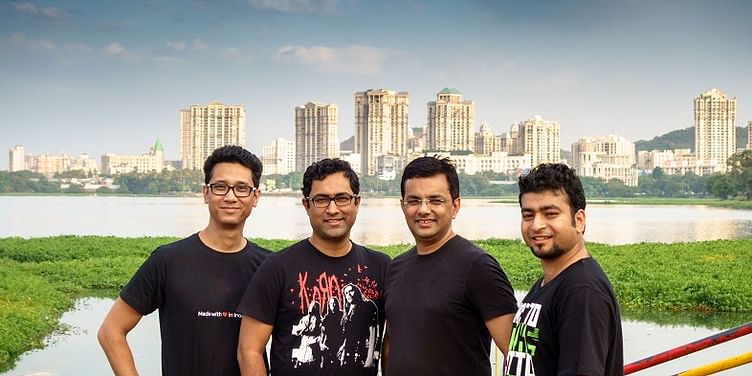 Indians might be obsessed with the idea of celebration, but marriage is still a sensitive topic. More often than not, families first meet to talk out the issue before the prospective bride and groom even get to meet each other. As a result, what follows is the embarrassment of rejecting the prospect.

In an age when millennials have the power to choose everything for themselves, why does a topic as sensitive as marriage get caught up in the age-old family trap?

Breaking this paradigm is Mumbai-based Marrily, which was born out of Co-founder Sourabh Varma’s (38) own experiences in this area.

Marrily is a platform for singles who want to do it (seek a life partner) themselves.

Previous to this, Sourabh was working on a corporate gifting startup with fellow IIT-Kanpur alumnus Ajay Pandey (38). However, realising the dearth of funds and seeing the limited growth of the sector, the duo thought of shutting shop in 2015.

Sourabh was now on the lookout for the next big thing and that’s exactly what happened when he met up with a friend.

Looking to settle in, his friend ended up recounting the experiences Sourabh himself had had — the same random proposals, the same embarrassment — absolutely nothing had changed.

This was what encouraged Sourabh to set up a matchmaking platform sans bitter experiences. He then roped in Ajay, who went on to introduce him to another IIT-Kanpur graduate, Sukamal Pegu (35), who had been contemplating a similar venture.

Next to join the co-founders was Harsh Vardhan (28), an IIT-Kanpur alumnus whom the trio found through the alumni contact programme.

This was how the team came together, and after beginning work on the idea in September 2015, the platform was launched in February this year.

So how is the platform different?

Conventionally, there are legacy players like Shaadi.com and Bharatmatrimony.com which seem to be dominating this sector. However, according to the founders, these online matchmaking websites suffer from two key pain points — a high number of fake profiles as well as large numbers of irrelevant search results. Further, Sourabh says that the penetration of these websites is merely four percent of the annual marriages in India.

Therefore, basing their differentiation on these factors, Marrily aims to address these issues through their platform.

Getting on the app, users have to login through their Facebook accounts. During this process, the app insists that users put in information such as occupation and designation.

To combat fake profiles, the platform has a ‘selfie patch test’, where users are asked to take selfies which are matched with their faces (on Facebook). This process at the moment is part-manual, part-automatic, enabled through technology.

This is where the differentiation comes in. Unlike asking questions like whether a person smokes, which often leads to a lie, we ask whether a certain user would prefer someone who smokes. We also ask users about their lifestyle expectations post marriage. This includes whether they would like to relocate or would want to continue working, along with other questions on income, and caste preferences (if any).

The algorithm engine at the backend works to find the right matches based on the information. The engine also learns overtime based on his behavioural pattern of likes and dislikes. Just like Tinder, users can talk to each other only when both of them have mutually liked each other on the platform. Marrily also assesses a user’s Facebook behaviour, scavenging through the messages he/she posts on social media.

The co-founders claim that there are zero fake profiles on their platform. They say,

“We are dedicated to providing a differentiated experience to the users, ensuring no junk comes their way, while understanding their requirements. Marrily is for individuals who have tried the conventional ways and want to do the matchmaking bit themselves.”

The platform has a total of 5,500 users, and is experiencing a rate of almost close to 1,300 installs every month. The co-founders will look to monetise once they hit a 1,00,000 users, in the next six to eight months.

Bootstrapped, this five-member team is looking to close their first round of funding this year.

How would the revenue work?

Converting themselves into a freemium model, the platform will endorse premium subscriptions in the future. Not locked yet, but according to Sourabh, the firm plans to charge Rs 4,000 for 20 matches and Rs 5,500 for 40 of them.

“Basically, the idea is that after a point a user will have to pay money to see more matches,” adds Sourabh. However, he claims that the platform will remain free for the first 1,00,000 users.

The platform also looks to introduce a marketplace which will have vendors providing value-added services such as gifting, offline verification, etc.

Matches aren’t made in heaven anymore, but on apps

There couldn’t be a better time for dating apps in the country. On Google’s Play Store there are tons of dating apps which pop up, all claiming to help you find the right partner, but the trend seems to be towards apps meant for hookups.

According to research firm MindShift Metrics, nearly 67 percent of singles know couples dating online and have met via such online portals. Further, by 2040, couples that have met online are all set to rise from 33 percent to 70 percent.

Adoption in India doesn’t seem to be a problem. Shaadi.com, which was launched in 1996, today boasts over 3.2 million matches with other categories like VIP matchmaking matrimonial services also pooling up.

This could be seen in terms of VCs showing their love as well.

"People spend 30 minutes a day on these apps — it's another form of social engagement."

Dating app iCrushiFlush which, gets 70 percent of its users from smaller cities, has received undisclosed funding from IDG Ventures; TrulyMadly has received 5.9 million from Helion and Kae Capital, Frivil (earlier Thrill) received $976,000 from Shaadi.com and SD Ventures and Aisle has received $283,000 from TermSheet.io, ah! Ventures and others.

In April 2015, Bharat Matrimony acquired dating app Matchify. Other apps and platforms in the market include QuackQuack.in, Dil Mil, Plush, and of course, market leader Tinder.

However, these different apps are just solving different aspects of the dating game. For example, there is OKCupid which is looking to cater to larger audiences and wider sexual orientations; Woo which is aiming at an audience above the age of 25; and Aisle, which also claims to be into matrimony matchmaking.

But most apps seem to be having differentiation in their playing modules, than the claimed technology backend. To give an example, in 2015, Frivil (now Thrill) started allowing people to rate one another on looks and matched them according to their rated score. This was to beat market leader Tinder as well as to tackle the biggest problem of getting more females on the platform.

According to the founder, although it sounded superficial, it took off since women wanted to know how they are judged on the basis of how they look. This scoring system was a change in gaming module to find your crush.

Through these platforms, one thing that’s for sure is that relationships are getting less complicated and people more vocal. Still, how much technology is taking a play in this space and solving issues of preferences is still to be seen from these new age platforms.

Moreover, the market seems to be hungry for newer technologies like artificial intelligence to disrupt the space, with companies adopting smarter business models apart from the general freemium models.